This week's lovely 13 Questions guest, Roxy Vandiver, is an actress and model who has graced the pages of Maxim, Inked, and Fangoria to name a few... and now she's on The Death Rattle! She was nice enough to take time out of her busy schedule and many photo shoots to answer some questions and let everyone know what inspires her and what type of music and film she's into, amongst other things, so read up and check her out at the links below. 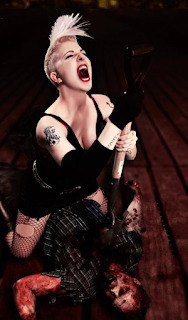 1. Who are you and where are you from?
I'm Roxy Vandiver from Houston, Texas. Award Winning Actress, Alternative Supermodel, and Artist's Muse. One of Maxim Magazine's Top 3 Horror Actresses of 2012, Wikipedia's Top 50 Scream Queens of All Time, an entrepreneur, tattoo enthusiast, and total geek.

2. Where might people know you from?
People know me from some of my many films including 'Spirit Camp', 'Princess', and 'Stay With Me'. I'm also known for being featured in magazines and on websites such as Maxim Magazine, Sinical Magazine, Inked Magazine, Horrorphilia.com, ScreamQueen.com, GeekTyrant.com, MrSkin.com, and also as a Celebrity Guest at Texas Frightmare Weekend,

3. When it comes to what you do, who or what are your major influences?
My acting influences are Nicole Kidman, Milla Jovovich, and Kate Beckinsale.
My modeling influences are Apnea, Mosh, and I'm even inspired by my dear friend Sabrina Sin.
My style influences are Madonna, Marilyn Monroe, and Gwen Stefani,

4. What four peoples' faces would you put on your own personal Mt. Rushmore?
Marilyn Monroe, Madonna, Gwen Stefani, and of course - Myself!

5. What's the last album you bought?
Singer/Pianist Birdy. Her debut album. Her music i so beautiful and haunting. 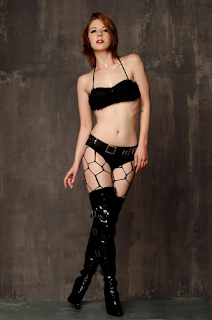 8. What's the last video game you played?
The ONLY video game I play is original TETRIS on old-school NES. I'm a Tetris Master. One of the top 100 players in the world.

9. What's the last book you read?
I'm actually in the middle of re-reading Anne Rice's 'The Vampire Lestat'. I've read it several times, but I like to revisit 'The Vampire Chronicles' every few years, as is is my favorite book series of all time, and Lestat is my literary hero. I have a large portrait of him tattooed on my back. 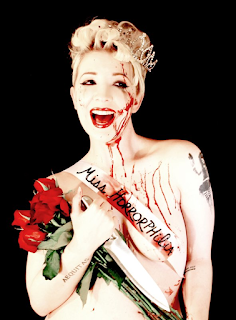 10. What are your favorite sports teams?
I don't get into sports AT ALL. However, I grew up in a Dallas Cowboys fanatic household. So, I suppose if I had to root for a team, it would be the Cowboys.

11. What cartoon or comic book character can you relate to the most?
I think I can relate to Joseph Michael Linsner's "Dawn". She's a Goddess, which I *hope* is the way that my fans see me, but mostly I relate to her chameleonesque style. She has many different looks, and she's a redhead who often wears her hair blonde, which I can definitely relate to. She wears incredible, beautiful clothes that often include corsets and garters with thigh-high stockings which are staples in my wardrobe.

12. Create a playlist of ten songs that give people an idea of your musical taste.
Oh this is hard! I'm pretty eclectic.
In no particular order:
"The Fragile" by Nine Inch Nails
"Foxy Foxy" by Rob Zombie
"Live to Tell" by Madonna
"Why Do You Love Me?" by Garbage
"Running" by No Doubt
"The Reflecting God" by Marilyn Manson
"Celebrity Skin" by Hole
"Black" by Pearl Jam
"Heartache Every Moment" by H.I.M
"Not Afraid" by Eminem

13. If you could spend the day at an amusement park with one person from the entertainment industry, who would it be and why?
Haha! Well, it is a little known fact that I'm terrified of heights and I've never been on a rollercoaster in my life! I suppose if we could just play games and ride the kiddie rides, I'd like to do it with Steven Spielberg. I'd totally charm him into making me his new muse! 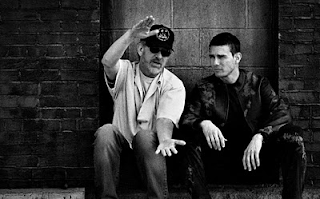