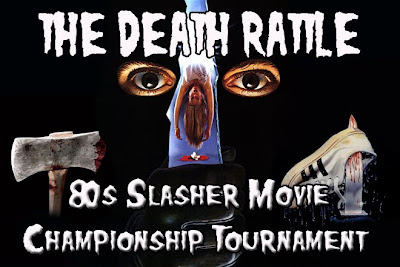 The polls have just closed for the First Round of the 80s Slasher Movie Championship Tournament, and now it's obviously time to move on to the Second Round of four matches. Eight movies have been eliminated and now eight movies are left. Below is a rundown of the four matches of the Second Round, but, as usual, if you'd like to get straight to voting, you know what to do.

Second Round: Match #1
Dario Argento's OPERA (1987) vs. MY BLOODY VALENTINE (1981)
This should be an interesting match seeing as both movies couldn't be any more different from each other, or so the saying goes anyway. We have arguably the best movie from Italian "Master of Horror" Dario Argento going up against a Canadian cult classic. Will the Gas-Mask and Pick-Ax reign supreme, or will the Fat Lady finally sing for MY BLOODY VALENTINE?

Second Round: Match #2
FRIDAY THE 13TH (1980) vs. MANIAC (1980)
Not only were these two beasts born on the same year, but they're also two of the most important and highly-regarded films of the Slasher sub-genre. I have a feeling that Mrs. Voorhees just might be too much woman for Frank Zito to handle, but you never know!

Second Round: Match #3
A NIGHTMARE ON ELM STREET 3: DREAM WARRIORS (1987) vs. FRIDAY THE 13TH PART 2 (1981)
Much like the match involving FRIDAY THE 13TH PART 2 in the First Round of the tournament, the key word for me with this pairing is "torn". These are both personal favorites of mine and I think that this one could go either way. I think FRIDAY is a better film, but DREAM WARRIORS does have a Wizard Master. Decisions, decisions.

Second Round: Match #4
TENEBRE (1982) vs. A NIGHTMARE ON ELM STREET (1984)
This Dario Argento guy seems to be a hit with the kids. Two of his movies have managed to advance to the Second Round of the tournament, but how many, if any, will advance to the Semi-Finals? Here we have not only Argento versus Craven, but Saxon versus Saxon! One is considered by many to be the greatest Giallo ever made, while the other is considered by many to be the scariest Slasher ever made. This will be interesting.

And now let's quickly go over the movies that got eliminated:
APRIL FOOL'S DAY lost to OPERA by only two votes, but OPERA was pretty much in the lead for most of the week. I was actually a little confused by this considering APRIL FOOL'S DAY actually came in second place in the qualifying polls right behind A NIGHTMARE ON ELM STREET, getting significantly more votes than OPERA initially.

SILENT NIGHT, DEADLY NIGHT got trampled by FRIDAY THE 13TH and lost by fourteen votes! I'm sure everyone saw that one coming, though. I sure as hell did. You don't fuck with that crazy bitch Mrs. Voorhees. You just don't.

THE BURNING lost to ANOES3: DREAM WARRIORS by five votes, which isn't too bad. But still, it's even more reason for Cropsy to be jealous that another burn victim is getting all the glory. First Freddy gets all the sequels, and now he eliminated him from the tournament. What an asshole.

SLEEPAWAY CAMP lost to FRIDAY THE 13TH PART 2 by only one vote! These two movies were neck-and-neck the entire time, and SLEEPAWAY CAMP was actually in the lead for most of the week. I actually refused to vote for either one because I love them both. It's like picking your favorite kid, but I admit that I did pull for SLEEPAWAY CAMP to advance.

MANIAC COP lost to TENEBRE by twelve votes. Not really a whole lot to say about that, and while I do like MANIAC COP a lot (mostly for nostalgia reasons), I was surprised to see it make the top sixteen. Actually it almost didn't but that's another story.

And finally HAPPY BIRTHDAY TO ME was the recipient of the biggest ass-whipping of the tournament, losing to A NIGHTMARE ON ELM STREET by seventeen votes! Even Stevie Wonder could have seen that one coming!
Posted by Aaron at 5:41 AM