"Born from a conversation about film magazines in a small Queens, NY apartment in the summer of 2007. Paracinema Magazine evolved from a discussion into a tangible product with the printing of our first issue. Armed with only a modest website and a myspace page we took to the internet to sell our creation. Surprisingly, our first issue was received far better than we could have ever anticipated. We haven’t looked back since. Each issue of Paracinema is a true work of passion, not only by its publishers but by each contributor and is meant to be appreciated by readers who possess that same type of passion."

Paracinema is a quarterly genre film magazine ran by two New Yorkers who I've been lucky enough to get acquainted with through mutual friends in the film-loving community, Christine Makepeace and Dylan Santurri. Below is an interview I conducted with one-half of the Paracinema team, Christine, and if you'd like to know more about Paracinema, you can check out their their website, as well as an interview that Christine did with The Blood Sprayer that deals more with the genesis and day-to-day operations of Paracinema.

Death Rattle: When and how did the idea for Paracinema come about?
Christine: Well, I had been doing some freelance work and was beginning to become a bit disillusioned. It seemed like no one was looking for the type of content I enjoyed writing (and reading). Co-editor Dylan and I had been looking for a project to do together. So we jumped in feet first and never looked back.

Death Rattle: What's been the most rewarding thing about running a magazine? And, on the other hand, what's the most frustrating thing about it?
Christine: I’d say meeting people has to be the most rewarding part. We work with some of the most talented, remarkable people. And, since it’s OUR thing, we don’t have to deal with anyone who isn’t a joyous ball of sunshine!
On the flip side, a lot of things are frustrating. Like with anything, when you devote a huge chunk of your time, you become almost obsessed. That obsession and preoccupation sometimes leads to taking things personally/too seriously. So really, most frustration is self inflicted. It’s totally worth it though.

Death Rattle: As a film fan, what is your genre of choice and what are some of your favorite films?
Christine: I think horror will always be my completely biased favorite. Many of us “genre” fans got our feet wet with slashers and zombie flicks. It’s a gateway genre!
I’m also a Hitchcock freak; so anything Hitchcock. Also, the Muppets. At the risk of just listing movies… I’ll just list some movies I find infinitely re-watchable: Phantom of the Paradise, Shaun of the Dead, Jennifer’s Body, Poltergeist, The Thing (so much horror). 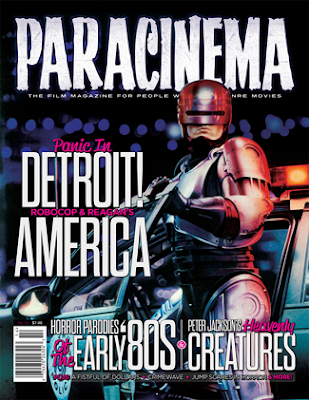 Death Rattle: Why do you choose to feature reviews on the website and not in the magazine?
Christine: That’s an amazing question. There are a few reasons. We wanted the magazine to stand apart. We knew we could never keep up with the monthlys (or bi-monthlys) in regards to “new” reviews and exclusives. We also wanted the magazine to be timeless. You should be able to pick it up and not have it feel dated. So reviews were never really an option.
The site is an extension of the printed magazine, but the rapid delivery system that is the internet allows us to feature reviews in a timely manner. We still prefer some variety, and that’s why you’ll find opinion pieces and essays alongside the straight up reviews.

Death Rattle: Speaking of which, what does maintaining the site entail? Do you post articles and reviews as your writers send them in, do you assign certain topics to people, or do your writers have a certain amount of freedom to post articles as they see fit?
Christine: We want everyone to have freedom. Ideally, I want folks focusing on their passions. I think that makes for the best end product. Online contributors write as often as they’d like and we just post them as we need them.

Death Rattle: Any plans to either go digital or put out issues on a monthly basis?
Christine: If we could make this a full time venture, I’d love to be monthly. Who knows?
Digital is slippery slope. We would love to be available on iPads and tablets, but selling a pdf of an issue is just not something we’re in to. More time needs to be spent developing something that would look good and researching the best way to get it out there.
As devoted as we are to print, we are also realistic. People want other options.

Death Rattle: A lot of Paracinema's contributors are from the blogging community; are you open to more writers coming on board, and if so, what do they need to do to make it happen?
Christine: I love new writers! I mean, I adore the folks that have been with us for 6 issues too. New blood is great though. We are very open to working with people and I hate to hear of anyone being intimidated; there’s no need to be.
I suggest grabbing a copy of the mag to get a feel for it and maybe taking a look at the site. The submission guidelines can be found there too. 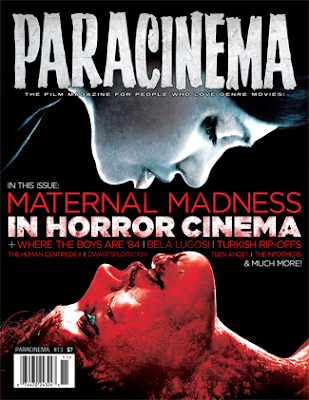 Death Rattle: Do you have any past issues or articles that you consider favorites, or perhaps consider to be the best representations of what Paracinema is all about?
Christine: The last 2 issues, 13 and 14, are what we’ve always wanted the magazine to be. I think they are both perfectly representative of what we’re about.
I’m quite partial to articles that explore the way women are portrayed in film. In issue 13 the cover story (by Ashley Avard) deals with pregnancy in horror films. Issue 5 had an amazing piece by James Gracey dealing with female sexuality in Teeth and Ginger Snaps.

Death Rattle: Certain magazines and websites have spin-off podcasts as a means of promotion and reaching out to new audiences; is a Paracinema podcast something you've considered?
Christine: It is! We’ve thought a lot about it. It’s something we’d want to pour a ton of energy into and it comes down to time. And quality. We would want it to sound amazing and be packed full of awesome content. It still may happen. I personally want it to happen.

Death Rattle: If someone told you they wanted to follow in your footsteps, professionally-speaking, what's the biggest piece of advice you'd give them?
Christine: Do it because you love it.