This week's 13 Questions participant, "Lightning" Mike Quackenbush, is a well-known figure in the independent wrestling scene and the head honcho behind one of the most unique wrestling promotions out there, CHIKARA. He's also a comic book enthusiast, wrestling trainer, and a podcaster for Grizzly Productions, for which he hosts the parenting podcast "Daddy on Board" and the "Grizzly Bear Egg Cafe" with BFF and Fox News anchor Clayton Morris, as well as co-hosting "The Trending Show" with Natali Morris. 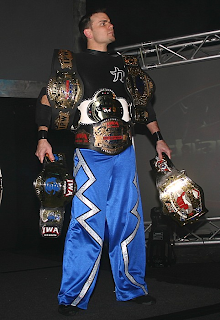 1. Who are you and where are you from?
-I'm Mike Quackenbush, "The Master of a Thousand Holds," and I am from inside my mother.

2. Where might people know you from?
-I've been a professional wrestler for the last 18 years, you might know me from CHIKARA, or from the podcasts I host on the Grizzly Productions network, or from any of the worst-selling books I've penned over the years.

3. When it comes to what you do, who or what are your major influences?
-I like the trailblazers, the ones that aren't afraid to do their own thing. Michael Nesmith, Satoru Sayama, David Byrne, the Monty Python guys.

4. What four peoples' faces would you put on your own personal Mt. Rushmore?
-Not enough is done to celebrate the likes of Johnny Saint, Jushin Liger, Manami Toyota and Owen Hart.

5. What's the last album you bought?
-Mayer Hawthorne's "How Do You Do"

6. What are the last movies you saw in theaters and on DVD?
-Marvel's The Avengers in a theater, on DVD it was King of Kong.

7. What's the last podcast you listened to?
-How vain do I sound if I admit it was one of my own? 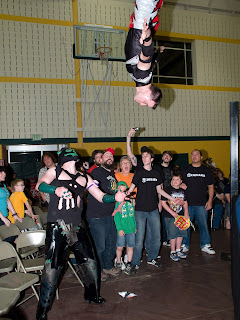 10. What are your favorite sports teams?
-Big on the Globetrotters. Not so big on the Generals. 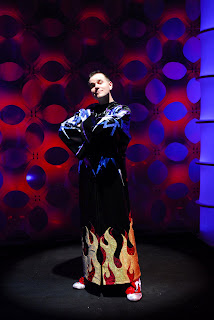 11. What cartoon or comic book character can you relate to the most?
-I think Batman is infinitely relatable. When written well, he's more real than a lot of people I know.

13. If you could spend the day at an amusement park with one person from the entertainment industry, who would it be and why?
-I bet Gordon Ramsay would be a lot of fun to share funnel cake with.