This week's 13 Questions participant is one-half of the horror-hosting duo behind the Midnite Mausoleum show, Robyn Graves! After you read this post and get to know Ms. Graves a little better, be sure to check out and support Midnite Mausoleum by clicking on any of the links below if you're not already doing so by this point, and say hi to Robyn and her partner-in-crime Marlena Midnite if you happen to be at one of the many horror fests and conventions that they attend. 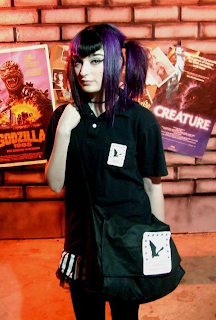 2. Where might people know you from?
I am the Midnite Mailgirl & Marlena Midnite's partner in crime on the public access horror hosting show Midnite Mausoleum.

3. When it comes to what you do, who or what are your major influences?
There are many beautifully spooky ladies in the horror hosting world! Elvira, Vampira, Stella, Ms. Monster, Evelle LeChat, Crematia... cleavage & allure for years! As a sidekick, I relate to Gir's silly attitude.

4. What four peoples' faces would you put on your own personal Mt. Rushmore?
Pee Wee Herman, Rob Zombie, Vampira, Michael Keaton as Beetlejuice

6. What are the last movies you saw in theaters and on DVD/Blu-Ray?
Snow White & The Huntsman (good lord Charlize!) Lucky McKee's The Woods (it was decent, but The Woman was amazing) 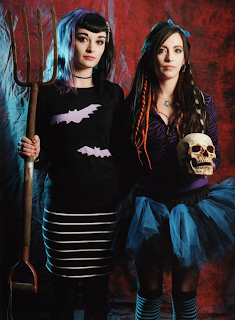 7. What's the last podcast you listened to?
Oh gosh, I can't even remember. How embarrassing, I'm always listening to Pandora or the such.

8. What's the last video game you played?
Ocarina of Time. I only own a Nintendo 64, & it only has one controller, which is fine cause then I don't have to share.

10. What are your favorite sports teams?
I don't know a dang thing about sports, but I like to go to roller derby bouts & yell at the girls that are much bigger than me.

11. What cartoon or comic book character can you relate to the most?
Cartoon Lydia Dietz, nincompoop Gir, or Flapjack from the Marvelous Misadventures of Flapjack, he's so wide eyed & adventurous 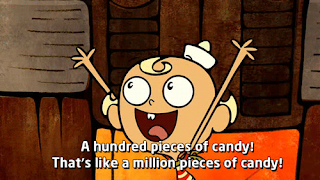 13. If you could spend the day at an amusement park with one person from the entertainment industry, who would it be and why?
Karl Pilkington. He's so negative about things, I think it's hilarious. 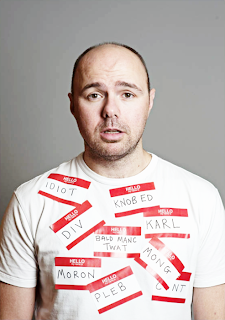