KILLER BARBYS VS. DRACULA is the follow-up to KILLER BARBYS, both of which are directed by Jess Franco and feature a (now defunct) Spanish female-fronted bubblegum punk band (Killer Barbies) battling vampires and occasionally pausing to perform one of their songs. Whereas the first KILLER BARBYS (spelled with a "y" in "Barbies" for legal reasons) was a Gothic horror film that saw the band stranded and holed up in a castle inhabited by a Countess Bathory type of character, this follow-up (released six years after the original) takes place at an amusement park in Spain, where the band rehearses a lot, occasionally performs and... I dunno... hangs out at, I guess? 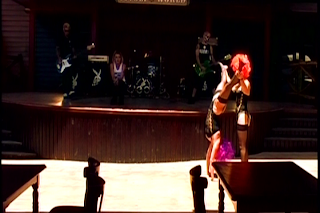 During the first act, a number of characters show up, including a drunk who works at the amusement park and claims to be "the real Count Dracula" (he even name-drops Universal Studios and calls himself "the original version without the subtitles" before calling a female reporter a bitch) and the late Lina Romay, who plays the Transylvanian Secretary of Culture and, along with her assistant, brings a casket to the amusement park, which she claims contains the true Count Dracula. When it was all said and done, I still wasn't quite sure what Lina Romay's character's intentions were by bringing Dracula to the amusement park, but it's apparent very early on that coherence is not one of the film's strong suits. Basically what happens is that the Killer Barbies play one of their songs at the amusement park and it causes Dracula to be resurrected and dance around for a bit. He then proceeds to go on a killing spree (mostly during the day, mind you), a Van Helsing type of character shows up, the Barbies play more songs, and more vampire shenanigans ensue. Also, Lina Romay (who's adorable in this), for some reason, sneaks around the amusement park a lot and provides comic relief while doing so. 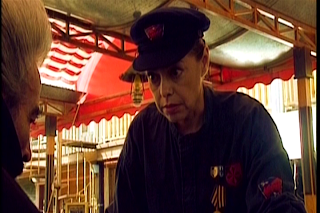 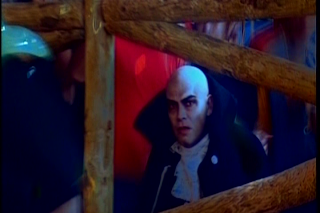 As awful as it is, I've seen the first KILLER BARBYS movie about three times. I hated it at first, but it eventually grew on me because it has a certain SCOOBY-DOO charm about it that I liked, and I also kinda dug the Killer Barbies as well. In both films, more of an emphasis is put on the band than anything else, as these movies seem to be a showcase for the band and especially their frontwoman Silvia Superstar (who actually gets naked in the first movie). On top of that, their songs are quite catchy and Silvia has that perfect, somewhat high-pitched voice for a bubblegum pop-punk band. Knowing what to expect with KILLER BARBYS VS. DRACULA in terms of music over narrative, I also found it to be enjoyable for the same reasons, and probably more so than the original movie, but let's make no mistake about the fact that it's not a good movie by any stretch. Technically speaking, and based on what I've seen from the director, this is probably Jess Franco at his laziest and most inept. If you like films that feature one mind-boggling WTF scene after another, then KILLER BARBYS VS. DRACULA is a gold mine. I honestly couldn't take notes on this movie fast enough, so for me to talk about the film's many moments of unintentional hilarity would basically consist of running down the entire movie from start to finish. One of the highlights is the female reporter who I mentioned earlier. I'm not sure why she's at the amusement park with her camera crew and constantly interviewing people (I assumed it was a Grand Opening, but I don't think there was any mention of it). At one point she actually tries to interview Dracula (the legit one, not the poser Dracula who works at the park) and asks him if he "...ever had a problem with AIDS" since he's been drinking blood for a couple of centuries. Unfortunately the female reporter doesn't last very long, but she calmly poses one final question before Dracula claims her as one of his victims: "Why are you such a bastard?" Also present is Jess Franco's trademark camera work that suggests he may have fallen asleep behind the lens. At one point the camera zooms in on Dracula's chin, and during one of the Killer Barbies performances the camera pans away from the action and zooms in on a wall.

One of the best examples of Franco's laziness in regards to making this film is the final performance of the Killer Barbies. The grand finale, if you will. Franco basically shot the Barbies performing on the same little stage at the amusement park and inserted stock concert footage of some ginormous outdoor music festival with thousands upon thousands of people jumping around and rocking out. Whether this was done for camp value or if Franco honestly believes he could trick people into thinking that the Barbies were playing for thousands of people, I have no idea, but it's there. What's even more baffling about this editing choice is that the Barbies are clearly performing during the day and the music festival footage was filmed at night. 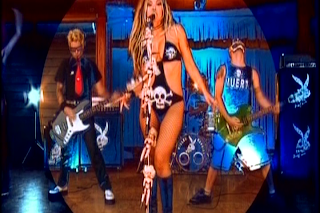 As I said, this is not a good movie by any stretch and it's more of a comedy than a horror movie. It's a failure on so many levels, but I genuinely enjoy it because of its silliness. Pretty much all of the voices are dubbed, so I can't tell if the members of the Killer Barbies are good actors or not (I'm guessing not), but Silvia Superstar is truly a sight to behold. She obviously got some breast implants since the first movie and she wears some sexy outfits throughout the film, so at the very least you'll get some eye candy with this movie (well, if you're into chicks that is). As I said, KILLER BARBYS VS. DRACULA is absolutely inept but cute and enjoyable if you can sort of just surrender yourself to it and you can tolerate the music. However, I'd recommend the original KILLER BARBYS before seeing this one; not that there's any continuity from one film to the next, but in the first you get to know the band a lot better and spend more time with them as characters, whereas this one has a revolving door of people.