I could talk about my tastes in porn or about how Sasha somehow gained immense stardom in the adult industry, but neither of those things have much to do with the movies I'll be talking about or why I even picked Sasha Grey as a Double-Feature subject. To be honest, there's no reason in particular why I chose Sasha. I was trying to come up with a list of ideas for Double-Features, and, while doing so, I saw that Sasha Grey had a new film called THE GIRL FROM THE NAKED EYE. This would have been a perfect excuse for me to pair it up with another film that Sasha starred in called THE GIRLFRIEND EXPERIENCE, which I'm actually a fan of. Unfortunately, I revisited that film during my brief hiatus from The Death Rattle a couple of months ago and I don't like re-watching movies in such a short amount of time, so instead I paired up GIRL FROM THE NAKED EYE with SMASH CUT (which I saw a couple of years ago). So, pretty much, this Double-Feature came down to an idea and availability, not a particular fondness for Sasha Grey.

SMASH CUT is basically a love letter to cult filmmaker Herschell Gordon Lewis and part of the whole Grindhouse/Exploitation revival. H.G. Lewis even appears in the film's intro as himself and later on in the movie as a character. SMASH CUT revolves around a failing b-movie director named Able Whitman (the late David Hess), whose latest film hasn't gone over well with audiences. Feeling defeated and going through both a personal and professional crisis, Able eventually finds inspiration through murder and death, and it's all presented in a comedic, schlocky manner rather than a nihilistic one. 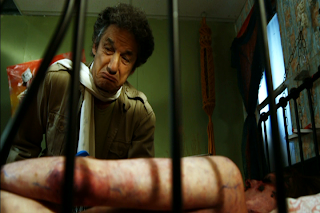 Able gets into a car accident while driving home, killing the stripper who's in the car with him. Instead of calling the police and reporting the accident (and the death), he keeps it a secret and gets the bright idea to use the stripper's body parts as props for his newest film. Production value! He justifies it by wanting to connect with his audience and essentially "give them what they want." In a way, it's a commentary on the gorehounds of the horror community - "If it's death you want, death is what you'll get." But, for the most part, it's the case of an out-of-touch director who resorts to desperate (and illegal) measures to make stay relevant.

Unlike the next movie I'll be talking about, Sasha Grey actually plays a big part in this. Other than David Hess, she probably has the most screen time. Her character, April Carson, is a news reporter and the sister of the dead stripper. The thing is, no one knows she's dead, so everyone just thinks she went missing. April hires a goofy private investigator and even goes undercover herself as an aspiring actress in order to get close to the main suspect tied to her sister's disappearance: Able. I wouldn't go so far as to call Sasha Grey a stellar actress (although I think she's good in THE GIRLFRIEND EXPERIENCE because of the type of movie it is), and I honestly don't find her to be very attractive (nothing against her, just not my type), but she's cute in this. I found Sasha to be a good fit here because her look and personality compliment the naive character she plays. 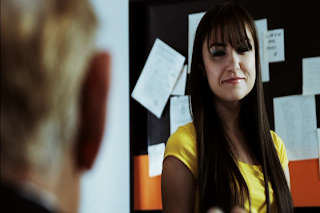 As I said earlier, I first saw SMASH CUT a couple of years ago. I didn't like it much back then, but I thought it looked great for a low-budget indie movie. I still feel the same way now, but I'm a bit more forgiving of it this time around because of the fact that David Hess has since passed away. I'd be lying if I said that I was sad at any point while watching this, but it was nice to see him in one of his last roles having some fun and playing the antithesis of the ruthless characters that made him famous. Speaking of which, we get a bit of stunt casting here, which tends to be the case with movies of this type. Michael Berryman also stars in this and wears a really bad wig (to be fair, it's supposed to look bad). I'm sure the two of them have crossed paths on screen prior to this, but it's still cool to see the two of them playing rather inept characters in this considering they both played menacing figures in two of Wes Craven's most important films (Hess in LAST HOUSE ON THE LEFT and Berryman in THE HILLS HAVE EYES). 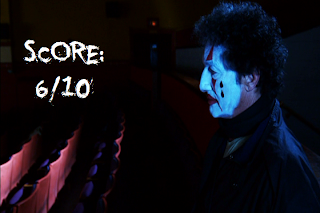 The biggest positive of SMASH CUT - and the only thing that I can truly defend about this movie - is that it's shot pretty well for a low-budget splatter/exploitation movie. There are a lot of bright colors that really pop, and the brief moments in the film that feature the manufactured scratched-up grindhouse look are actually pretty decent-looking. The score is interesting as well. The music is hard to describe other than the fact that there are a lot of screeching saxophones and there are certain musical cues that sound similar to Mike Patton's music from the CRANK 2 soundtrack. Being a Mike Patton fan, I was thrilled by the similarities to his music, but unfortunately the music here is a little too overwhelming at times. Oh, and the gore is plentiful, with the highlight being a lingering eyeball-trauma sequence that rivals anything that Lucio Fulci has ever shot. The gore and the visuals, however, overshadow what the film is trying to say in terms of it being self-referential and clever. Even though I kinda liked it, I would only recommend this to the gorehounds and people who have a tolerance for low-budget indie horror.

Next up is THE GIRL FROM THE NAKED EYE. One thing that stood out about this movie right away when I saw it on the shelf at the video store is that the cover is very reminiscent of SIN CITY. A bunch of characters standing in the rain, black background, big red lettering for the title, gun-pointing. Oh, and Sasha Grey is featured very prominently on the cover as well. That being said, it didn't seem to have a lot going for it, but it's almost like this movie was summoning me to watch it. It stood out from the rest of the films on the shelf like a sore thumb.

THE GIRL FROM THE NAKED EYE has apparently gotten some SIN CITY comparisons, which is understandable to a point. This movie has the aesthetic of a hyperstylized neo-noir, not to mention the Jazz score and constant narration throughout. But that's about where the similarities end. It's actually more similar to THE CROW than anything else I can think of (which I'll get to), and even that's a stretch. The story revolves around lead character Jake and a dead woman named Sandy. Jake has a gambling problem and works for an escort service (under the guise of a strip club) as a driver to help pay off a large debt. One of his regular passengers is the aforementioned Sandy, who strips and also prostitutes on the side. 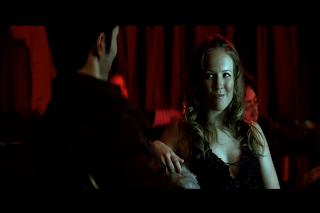 Sandy - the hooker with the heart of gold - ends up dead and Jake is one of the main suspects. Actually, Sandy's already dead when the movie starts, but we see her story unfold through a series of flashback scenes. Anyway, Jake attempts to get to the bottom of things on his own as a way of clearing his name, but as time goes on he begins to realize that he fell in love with Sandy and is basically on a mission to put some closure on her untimely death. GIRL FROM THE NAKED EYE never quite goes the vigilante/revenge route though. There are a few fight scenes here and there, but since the cast is primarily Asian, I assume the intention from the start was to showcase some martial arts fights and action set-pieces. That's about it as far as the violence goes. Because of the nature of the story, the tone of the film and the look of the setting, GIRL FROM THE NAKED EYE is sort of comparable to THE CROW, except, instead of a tragic, supernatural character avenging his girlfriend's death, the lead character here is dull and sort of a douchebag.

So, how exactly does Sasha Grey's character come into play? The answer is: she doesn't. Despite being promoted as one of the main stars, Sasha is only in this for a minute at the most. A cameo. Same goes for Dominique Swain, who has a lot more screen time but plays a small role nonetheless despite being advertised as one of the main stars. And Sasha plays a character so irrelevant to the story that her scene could have been cut from the film and it wouldn't have even mattered. 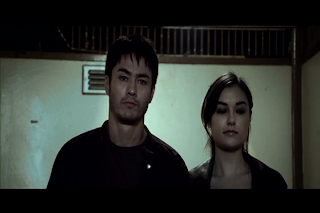 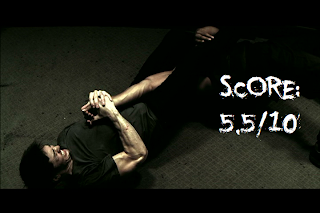 The thing about the flashback scenes I mentioned earlier is that there's no visual indication of them being flashback scenes, so they're pretty confusing. One minute you'll be watching a scene that takes place in present day and then you'll be watching a flashback scene the next, but, for me anyway, it often took me a little while to realize that I was watching a flashback scene because there aren't any transitions and the flashbacks come out of nowhere at times. If the attempt by the filmmakers was to incorporate jump-cutting, it wasn't well-executed. One great thing about the flashbacks, though, is that we get to see Sandy. Her character is probably the most interesting about the film, and the actress who plays her (Samantha Streets) is adorable. The fact that she's pretty much the only likable character in the movie makes the ending an effectively sweet one. I won't spoil what happens, but I'll just say that it plays on the theme of taking someone for granted and not realizing you have feelings for someone until it's too late. Aside from the fact that it's confusing in spots, GIRL FROM THE NAKED EYE is also slow and kinda boring. As cool as the fight scenes are, they kinda seem like padding and almost feel shoe-horned into the film. The tone is also uneven; sometimes it's tongue-in-cheek and sometimes it's played seriously. Oh, and there's lots of smoking too, so if you're currently in the process of quitting cigarettes, this is not the movie you wanna watch. But then again, I wouldn't recommend it anyway.