Well, this is it. Four weeks of random rentals. Twenty movies I'd never seen before, and a few movies that I didn't even know existed. I wanted to try to bang out another one and post it before the end of the month, but I have a lot on my plate this week. If you guys would like to see more of these, let me know. This was an interesting and beneficial experiment that I'm definitely open to doing in the future.

The Drama Section: STRICTLY SINATRA (2001)
The life of a Sinatraphile and aspiring lounge singer named Toni spirals out of control after he aligns himself with a mob. Set in Scotland, STRICTLY SINATRA is essentially a crime comedy. This isn't something I'd typically watch, but going into this with the cast in mind was an incentive. Coincidentally, the last thing I watched before this was the SONS OF ANARCHY season 3 finale since I'm in the process of playing catch-up, so it was cool to see that one of the show's stars, Tommy Flanagan, was in this. Also starring in the film are Brian Cox and Kelly Macdonald. Speaking of Kelly, I'm so used to seeing her as a boring, conservative character in HBO's BOARDWALK EMPIRE that I underestimated how cute she is. In this particular film, Macdonald has some hilarious moments as an air-headed cigarette vendor in a casino who befriends Toni. 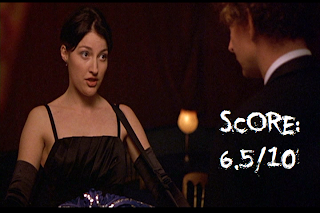 STRICTLY SINATRA works as a comedy, but as a whole it's not very engaging or interesting, and some of the fault belongs to the lead character Toni, who's almost impossible to sympathize with. Throughout the film, you're basically just watching him make an ass out of himself as he gets mixed up with the mob. In the process, he hurts the only two people who care about him. Since this is a comedy, there's obviously gonna be some redemption there, but it didn't work for me personally because I never gave a shit about him in the first place. At one point, though, he does realize he's a bonehead, so it makes rooting for him just a little bit easier. The film is also a bit uneven. It starts out really funny and takes a somewhat serious turn in the third act; not GOODFELLAS serious, but enough to be fairly jarring nonetheless. Another complaint of mine is that Brian Cox was sorely under-used, or perhaps it comes down to the script not giving him much to work with. But yeah, this was fine. Not bad but certainly not great either. Kelly Macdonald was the highlight for me. It should also be said that she plays a convincing drunk.

The Action Section: PIT FIGHTER (2005)
I was pumped for this one. Why? Because it stars Scott Adkins, who's quickly becoming one of my favorite Action stars thanks to his turns in a number of awesome straight-to-DVD joints. I was also excited because this film has yet another connection to BOARDWALK EMPIRE - that being British actor Stephen Graham. So, PIT FIGHTER is about a successful underground fighter in South America who has amnesia. It's revealed early on that the memory loss is the result of a gunshot to the head, but the circumstances surrounding the incident are brought to light throughout the film in the form of choppy flashback scenes and whatnot. The only thing he remembers is being in love with a woman named Marianne. His desire to somehow reunite with her is what keeps him going. The bulk of PIT FIGHTER is essentially this amnesiac competing in underground fights as he's haunted by the ghosts of his past. Meanwhile, his buddy Manolo (Steven Bauer) is quickly falling out of favor with some local gangsters. 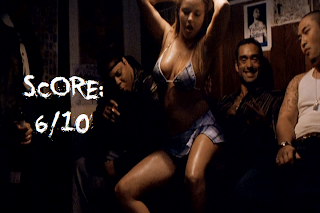 Lead actor Dominique Vandenberg is pretty terrible as an actor in this, but he's a legit bad-ass who's lived a fascinating life. For the sake of not bloating this post, I'd suggest looking him up and reading about him. It wasn't until after watching the film that I learned it's pretty much autobiographical with the exception of the amnesia and criminal activity; knowing this elevated PIT FIGHTER for me in hindsight, but, based on its own merits, it's not a very good film. The fight scenes are surprisingly brutal, but the choreography and presentation left much to be desired. Speaking of disappointing, Scott Adkins and Stephen Graham have very little screen time. I'm not sure why the fuck you'd cast Adkins (a legit martial artist who's built like a brick shit-house) in a movie about fighting and not have him play a fighter, but such is the case here. PIT FIGHTER ends up being pretty good, ironically, once the actual pit-fighting element is thrown to the wayside, but it takes a long time to get there. Noteworthy highlights are Fernando Carrillo, who plays the film's heavy, and the fact that one of the lead character's opponents is wearing a Blue Demon mask for some reason.

The Classics Section: THE MAGNIFICENT SEVEN (1960)
I guess now is as good a time as any to scratch this one off the "List of Shame". I'd been waiting to see this one because I wanted to watch Akira Kurosawa's SEVEN SAMURAI first. Well, I did that last year, so it was only a matter of time. I'm not ashamed to say that I don't worship at the altar of Kurosawa. Perhaps I need to see more of his films to appreciate him, but I've seen SEVEN SAMURAI, which some would call his masterpiece, and my reaction was lukewarm. Cinematically it's great, but, for me, it didn't live up to its reputation. At least in the case of THE MAGNIFICENT SEVEN (which is a remake of the Kurosawa classic if you ain't know), it lives up to the hype. 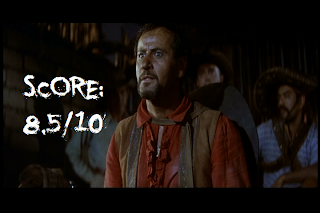 Like most of the movies covered in the Random Rental Experiment, I could do a standalone review on this one, so I'll try to be as concise as possible. When it comes to Westerns, the less old-fashioned and the more violent the better. MAGNIFICENT SEVEN falls into the old-fashioned and traditional category, but it's such a cool film that it doesn't even matter. One needs to look no further than the cast to realize the awesomeness of this movie. Charles Bronson, Steve McQueen, James Coburn, Yul Brynner, and so forth. I was curious to see who would end up being my favorite character, who would get lost in the shuffle, who would give the best performance, etc. One of the areas where the film succeeds is that everyone in the titular "seven" brings something to the table and adds an emotional element. You could even say the same about some of the supporting characters. In the end, I couldn't pick a favorite; I grew to love them all. What stood out for me the most are the gorgeous Mexican locations where they shot it. MAGNIFICENT SEVEN is solid in almost every way. Bottom line.

The Horror Section: THE DEVIL'S CURSE (2008)
Five college students get kicked out of their home and have nowhere to go. They shack up in an abandoned building until they can find a place to stay. Turns out the building has a tragic history, which the characters acknowledge. So they naturally mess with a Ouija board and accidentally unleash... something? I'm still not sure. 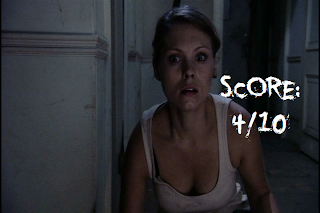 Films like THE BLAIR WITCH PROJECT and SESSION 9 have proven that you don't need to establish a physical threat in order to be effectively scary. A creative approach and the ability to merely suggest a threat rather than show it to you works wonders if done correctly. THE DEVIL'S CURSE tries to do what those films did and fails miserably. It's not a supernatural horror movie like its advertising or title would suggest. In fact, it's barely a horror movie at all. I guess you could technically label this as Psychological Horror, but the end result is a boring, meandering movie that doesn't go anywhere interesting. A good version of this film would be something like LOVELY MOLLY. Watch that instead. If disembodied voices and people walking through hallways with flashlights freaks you out, this might be up your alley.

The Foreign Section: GOING PLACES (1974)
Two French slobs, Jean-Claude (Gérard Depardieu) and Pierrot, travel the country and get into various misadventures in this plotless comedy. They steal, abuse women, vandalize other peoples' property, and cross paths with a number of characters - a young blonde who reluctantly becomes their sex slave and a strange older woman who makes them subservient just to name a couple. One of them is afflicted with impotency after his scrotum is grazed with a bullet. Speaking of which, the original French title translates to THE TESTICLES, which is a much more appropriate title for this mean-spirited and raunchy film than GOING PLACES. 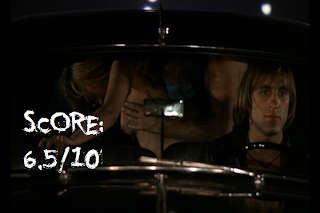 I guess ones enjoyment of this film depends on how you approach it. After a while, I started to imagine the characters as aliens who just landed on Earth and are learning about the human race through observation and experimentation. If you wanted to somehow find a social commentary in all of this, I suppose you could see the two main characters as being embodiments of what's wrong with society rather than actual physical beings. Going beyond the surface level is the only way that I could personally justify their ignorance and complete lack of social etiquette. It's a strange film; if Jean Rollin made a comedy, I think it would be very similar to GOING PLACES. Overall, I found this to be overlong and not very funny (even on an ironic level), but it's an interesting and unpredictable journey nonetheless. And, despite their shitty actions, the lead characters end up being somewhat charming. On a side note, it's crazy how much young Gérard Depardieu looks like a young Robert De Niro.