I first saw MIDNIGHT MEAT TRAIN when it originally came out, which was back when I had a strong dislike for Bradley Cooper. In fact, this may have been the first film that made me take notice of him. Needless to say, he's gone on to bigger and better things and probably won't be turning up in slasher movies such as this anytime soon, and I've since changed my tune on him. But back when I saw MIDNIGHT MEAT TRAIN, I was turned off by his naturally unlikable disposition. He just looks like a smug jerk, know what I mean? I'm not saying he's like that in real life, but he has that look about him. To be fair, people say the same thing about me, so if I happen to turn up in movies at some point in time, I won't blame anyone for hating me based on my appearance. 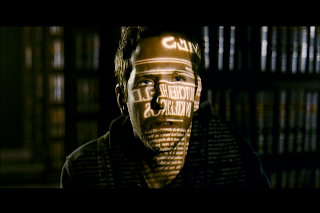 Based on one of the entries in Clive Barker's "Books of Blood", MIDNIGHT MEAT TRAIN is set in New York City and revolves around a photographer (Cooper) who specializes in capturing the city as candidly as possible - the grittier the better. His intentions aren't to expose the city, but rather to shine a light on the darkness if you will. Right before he gets a meeting with a hotshot art dealer (Brooke Shields), he saves a woman from being mugged in the subway but manages to take a couple of photos first of course. What a jerk. Fortunately for him, one of the photographs impresses the art dealer, but she wants a couple more before she'll even consider displaying his work at an art show. Unfortunately for her, she's subsequently killed on a subway car by the film's antagonist Mahogany (Vinnie Jones), also known as The Butcher. 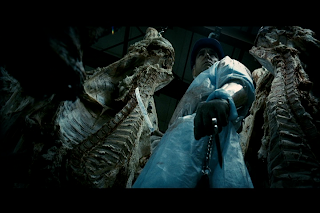 Mahogany is basically a well-dressed mute who hangs out in the subway, boards the last train, and kills whatever passengers are left. But he does so in a very methodical way that would indeed classify him as a serial killer. By day he works as a legit butcher in a slaughterhouse, so it comes as no surprise that his implements of death and methods of murder are reflective of his nickname. People get bludgeoned to death with a heavy-duty meat tenderizer and subsequently hung by their feet on meat hooks that are strangely built into the subway car. Oh, and the conductor is in on it too, which is revealed early on. Long story short, Cooper's character gets the photographs he's been waiting for when he catches Mahogany in the act and proceeds to spy on him, which leads him down a dark path and changes him for the worst. Melodrama ensues. 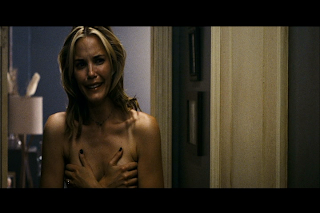 I know a lot of people have said negative things about this movie for a number of reasons, but I've always been a fan. It's a flawed film for sure, but I guess I'm just too much of a mark for Clive Barker to not be fond of it. Clive backed it and was apparently pleased with the final product considering he provided a commentary track for its DVD release, so if it's good enough for him, it's good enough for me. That's not the only reason why I like it though, but I'll get to that later. For now I'll address some of the film's negative elements, namely the CG blood. 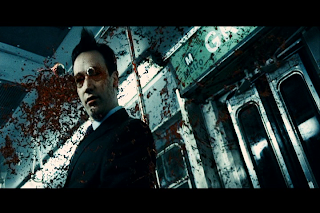 To this day, the CG blood is still a problem for me, mainly because of how noticeable it is. To be fair, though, the CGI is mainly used in the first half of the film, and there's buckets and buckets of practical blood utilized towards the back end. I don't know anything about director Ryûhei Kitamura's reasoning for going the CG gore route, but if he did it for stylistic purposes, I'm down with that. MIDNIGHT MEAT TRAIN is a stylish film with a lot of complicated shots that could only be achieved through CGI and whatnot, so I wouldn't be surprised if Kitamura used digital blood for the sake of pulling off spectacular but undeniably goofy-looking set-pieces. It doesn't look good either way, so I guess it's just a matter of how forgiving you can be of it.

As far as its positives, I love the cold aesthetic of MIDNIGHT MEAT TRAIN. The subway in particular was clearly designed to look like a morgue or a meat locker, and in that case it's a success. Kitamura and company took the whole butcher/slaughterhouse aesthetic and ran with it. I also like that this film shows you a lot of Mahogany right from the start. Sometimes showing too much can be a bad thing, but in this case it works. Once it's all said and done, Mahogany is an actual character who the viewer benefits from knowing well, so I'm glad they chose to go that route rather than make him an elusive boogeyman. Another great thing about this movie is that it doesn't waste any time getting to the "money shots", and by that I mean the gore set-pieces. The film literally opens with a glimpse of someone getting murderized on a train as an establishing scene, and from there the slaughtering of unsuspecting passengers gets progressively more graphic and brutal. In that respect, the film is paced well. This is a slasher movie after all. 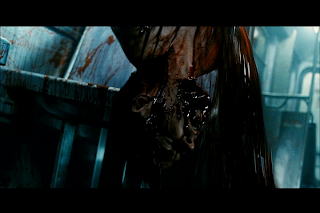 MIDNIGHT MEAT TRAIN goes back and forth between Cooper's character and the Butcher throughout, which is interesting in that they parallel each other in the context of the narrative. They also contrast each other in a way that portrays one as being representative of the light and the other of darkness - one of the city and the other of the underground. As they're inevitably drawn closer to each other throughout the film, the lines are blurred in a way that ultimately pays off once it's all said and done. That said, it's a great story of two people from different walks of life essentially uniting through murder and voyeurism. Plus, the fact that it's based on a story by Clive Barker means there's inherently gonna be some interesting mythology that gradually floats to the surface. Still, though, there's some undeniable cheese in this. Tons of melodrama for starters. Pretty much any scene where Leslie Bibbs gets emotional is unintentionally hilarious. MMA fighter Rampage Jackson appears as a thug who gets dealt with, and his scenes are laughably bad. And of course the inevitable confrontation between Cooper and the killer towards the end is pretty absurd. But, I still enjoy the shit out of MIDNIGHT MEAT TRAIN despite its problems, and I think it's fair to say that this is style and gore over substance, which I'm fine with.