This is the first of hopefully many reviews I'll be doing of the ZATOICHI films, which I promised myself I'd eventually cover after I reviewed the excellent LONE WOLF AND CUB series. As you may have noticed, I'm starting with the sixth film as opposed to the first. The reason for this is simply that I don't have access to all 20-something ZATOICHI films. Normally I wouldn't even bother, just because I'm a completist when it comes to those sorts of things, but unlike the LONE WOLF films, the ZATOICHI films are comparable to Leone's DOLLARS trilogy, in that they're standalone films that are tied together through common threads rather than following the same storyline. That being said, movies will be skipped and I'll be jumping around the series and reviewing the films out of order, depending on which ones are available to me at the time.

The plan was to begin my series of ZATOICHI reviews with the very first film, THE TALE OF ZATOICHI, but the DVD quality was shit. The first two films were filmed in black and white, which is fine, but the Home Vision release of the first film features a print of the film that leaves much to be desired, not to mention the fact that it was a letterboxed 2.35:1 aspect ratio. During the dark scenes - and there were a lot - I could barely see what was going on. Wow, I'm starting to sound like the Basement of Ghoulish Decadence with all this DVD talk.

Just to give you some background info on the character of Zatoichi, he's a blind, bow-legged gangster who basically wanders around Japan by himself and works as a masseuse. He also has a reputation as a master swordsman. Apparently the ZATOICHI films see the eponymous character getting himself into all sorts of predicaments, but seeing as I've only watched two of the films as of this writing, I guess we'll discover what the series is all about together (that is, if you're as clueless when it comes to samurai films as I am, of course). 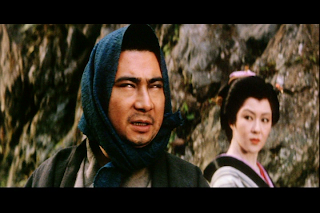 CHEST OF GOLD follows Zatoichi as he finds himself stuck in the middle of a scandal involving a group of villagers and the Yakuza. Attracted to a celebration being thrown by the aforementioned villagers after hearing some taiko drums, clapping, and singing, Zatoichi is invited to join the party when one of the villagers spots him dancing by himself, and it's there that he finds out the villagers have finally saved up enough money to pay the intendant (the tax collector) who's been relentlessly hassling them for the last three years. A huge weight has finally been lifted off their shoulders. Later, as the villagers are in the process of transporting the money to the intendant, they're attacked and robbed by three samurai - one of whom is played by the Lone Wolf himself, Tomisaburo Wakayama (the real-life brother of the actor who plays Zatoichi, Shintarô Katsu). 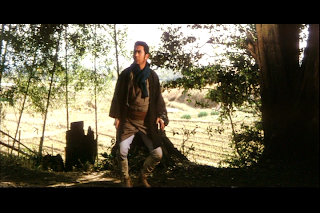 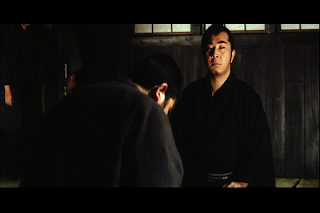 There's a lot of information to process in the first half of the movie. A lot. During the scene where the three samurai attack and rob the villagers, Zatoichi kills a handful of Yakuza members who were hired to protect the villagers. There are two separate Yakuza groups, mind you; the good guys, who are led by a character named Chuji that has been banished to an existence in the mountains (Chuji is also Zatoichi's old boss), and the bad guys, who are led by the ruthless Monji. The last time we see the titular "chest of gold" that contains the villagers' money, Zatoichi is sitting on it after having effortlessly killed members the Yakuza members who were escorting the villagers. For a good chunk of the film, the whereabouts of the chest is unknown, and this leads to speculation that Zatoichi was somehow involved in the ambush, but alas he's blind and didn't know what was going on at the time. Or so he claims. Zatoichi constantly pulls the "I'm just a lowly blind gangster" card throughout the film, but then turns around and proves on more than one occasion that his blindness is far from a handicap. On a side note, Chuji is apparently a Robin Hood-like recurring character in Japanese cinema. 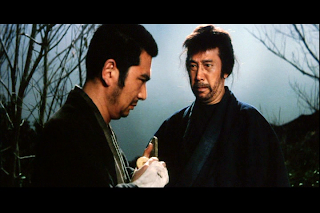 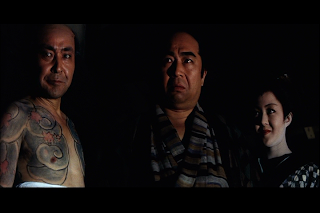 And that's just in the first thirty minutes.

So as to not give you a rundown of the entire goddamn movie, let's just say that the films builds to a reveal in regards to exactly who was responsible for the ambush on the villagers and the subsequent stealing of their money, as well as a showdown between Zatoichi and Tomisaburo Wakayama's character, Jushiro. Bad-assery ensues? Yeah, I guess you could say that.

Initially I was impressed by the very theatrical opening of this film. In different scenarios, Zatoichi slays groups of men as the film opens over a black background. This seems purely done to generate a certain mood rather than establish Zatoichi as someone who's more than capable of handling himself and working a sword. I say this because this is the sixth film in the series and it would be unnecessary by this point to give the viewer an idea of what type of person Zatoichi is. While the rest of the film isn't necessarily as theatrical, it's beautifully shot nonetheless. Gorgeous cinematography. Apparently this was the first of five ZATOICHI films to utilize a certain DOP who was known for shooting films in such a beautiful manner, according to the liner notes of the Home Vision release. I could be wrong. So yeah, this film certainly has that going for it. Great acting too, but at this point, despite my lack of expertise when it comes to Japanese cinema, I wouldn't expect anything less than solid performances all around, given the quality of the film. Seeing Tomisaburo Wakayama was quite the surprise (he also appeared in the second ZATOICHI film as a completely different character). Here, Wakayama displays his amazing presence nine years before the first LONE WOLF film was even made. A little moment towards the back end of the film in which Wakayama effortlessly kills a group of men and quickly puts his sword back in his sheath is a brief glimpse of how much of a natural this actor was. Needless to say, the scenes that involved Wakayama and Shintarô Katsu were a pleasure to watch.

The problem with the film, for me, aside from the insane amount of information being thrown at you early in the film, is that it's paced horribly. At around 80 minutes, this film should have been a breeze, but it felt like it was two-hours long, not to mention that it's not the most exciting movie out there. Perhaps I'm spoiled because I watched the LONE WOLF movies as my introduction of sorts to samurai films. The LONE WOLF films are insanely easy to follow, mostly because they each follow the same structure, more or less, whereas this one featured a lot of characters and I often lost track of who was who. Another advantage the LONE WOLF films had is that they were released through AnimEigo, and on their DVD releases they have subtitles that explain what certain Japanese terms mean. This is helpful for a dumb American like myself. Nonetheless, it's a solid film from a technical and quality standpoint, and the last ten minutes, give or take, are fucking excellent. There are also some great little moments in the film. The scene I mentioned earlier in which Zatoichi dances and subsequently joins the celebration, only to bust out a solo on the taiko drums, is enough to put a smile on anyone's face.