A remake of an 80's cult classic in which a Halloween house party is crashed by a demonic force.

While I wouldn't consider it essential horror viewing, I'm assuming most of you have seen the original 1988 NIGHT OF THE DEMONS. In case you haven't, the plot is quite simple: a group of obnoxious, socially-diverse high school kids throw a Halloween party at some abandoned house in the middle of nowhere and unintentionally unleash a demon who possesses the Goth chick Angela. In the remake, Angela is a socialite who's responsible for throwing the obligatory Halloween party, except it takes place in a supposedly haunted house that she rented. And instead of a group of characters uniting for the sake of partying, the characters here are brought together because of the party. Amongst them are a sleazy drug dealer played by Edward Furlong and the tough Final Girl played by Monica Keena, just to name a few. Corpses are discovered in the basement, a string of demonic possessions ensues, and a small group of party-goers are left to fight for their survival. 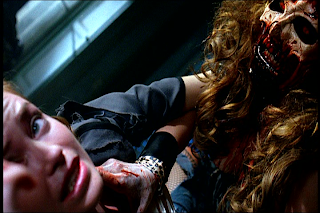 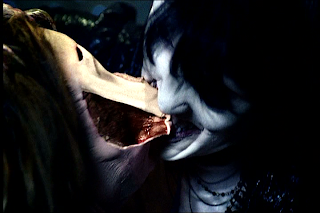 I can't give director Adam Gierasch credit for a lot (take a look at his filmography and you'll understand why *cough*MOTHEROFTEARS), but he at least does a good job here of tweaking the original story and not making it too much of a replica of the 1988 film. Regardless of whether or not he went into this with the right ideas or no ideas at all, it starts out somewhat promising but gradually falls apart to the point where it becomes yet another lazy, cliched horror movie in the big scheme of things. It's like Gierasch tried too hard to set up certain points he felt he had to hit in order to pay homage to the original, like the random dance sequence involving Angela and the infamous lipstick scene. The problem with that is that these scenes sort of feel out of place in the film, and they seem like nothing more than obligatory moments that are in the film for the sake of appeasing fans of the original. 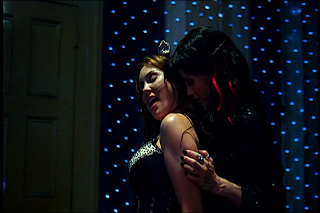 If you loathe stupid info-dumps in films that just reek of lazy writing, you'll probably get upset at the amount of them in this remake. Holy fuck. All Hell inevitably breaks loose and suddenly one of the characters is an expert on demons. Really?! Go fuck yourself. Something else worth mentioning is the fact that the characters who don't turn into demons immediately react with violence upon realizing that something just isn't right with the handful of party-goers who succumb to whatever curse that's plaguing them. Granted they should have reacted violently, but I find it funny that a prank being played on them was never taken into consideration. I mean, it is Halloween after all. But no, they're automatically aware of the fact that demons are amongst them and act accordingly. Like I said, certain points needed to be hit and blood needed to be shed... everything in between just seemed to be an auto-pilot. 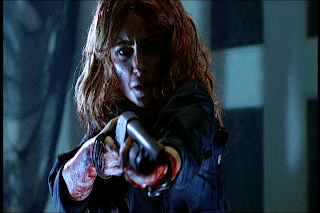 I realize I'm probably being way too critical of this remake, especially since I'm not a huge fan of the original in the first place, but I gotta calls it like I sees it. On the other hand, if you can watch this without critical eyes, you won't be completely disappointed. Like a couple of other films that Gierasch either wrote or directed, MORTUARY and AUTOPSY, this one has its fun moments but is far from being a "good" movie. If anything, it's a good background movie that you can tune in and out of, thanks to some wild cinematography and a relentless soundtrack of Horror Punk and Death Rock tunes from the likes of TSOL, 45 Grave, Concrete Blonde, and Type O Negative, just to name a few, and of course the blood and boob factor. Personally, I'll stick to the original, just because it has a Bauhaus song in it.