Led by the soft-spoken, stereotypical 50's greaser tough-guy Johnny, a rowdy biker gang known as the Black Rebels Motorcycle Club ride into a sleepy California town and terrorize the locals not with violence, but with their collectively obnoxious behavior and causing a scene at a nearby motorcycle race. When one of their members injures his leg after crashing into a car, the rest of the BRMC hole up in a bar and wait for a doctor to patch him up. There, the ruggedly handsome Johnny tries to woo the female bartender, Kathie, while the rest of the bikers basically pass the time by getting wasted. With the bikers preoccupied, a temporary sigh of relief befalls the town's residents, but it's not long before a rival biker gang, led by Chino, show up to the town and try to stir up some shit. A fight breaks out, and the drunken Chino is arrested after being singled out by the Sheriff who also happens to be Kathie's father. Just when you think the BRMC are showing signs of doing a 180 and standing up against the other (and considerably rowdier) biker gang, they instead join forces with them and proceed to raise hell. In the meantime, Johnny is seemingly torn between maintaining his rebellious tough-guy image and trying to romance Kathie, who doesn't seem particularly interested in the first place. 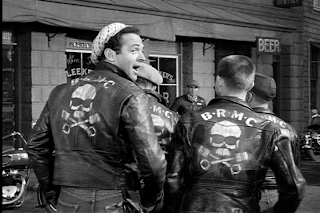 The back and forth between Johnny and Kathie is interesting in that she proves to be a challenge, and it's obvious by Johnny's status as an alpha male that he's not used to being challenged; how Johnny ultimately reacts to this is one of the things that the films builds up to, coinciding with all hell breaking loose as the bikers run amok. 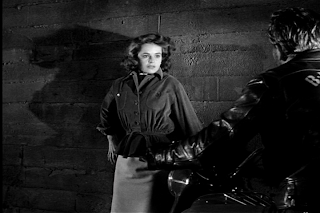 This was actually my first time seeing THE WILD ONE, and I'll go ahead and say right now that I didn't really care for it too much. But, before I argue my case, I'll just say that I do appreciate it for what it is. I appreciate THE WILD ONE for being the original biker film and for starting a genre that I adore, although what it eventually blossomed into in the late 60's and early 70's is another beast entirely. I also appreciate this film for inspiring Kenneth Anger while making my favorite film of all time, SCORPIO RISING (footage of Marlon Brando in THE WILD ONE appears in Anger's avant-garde classic, as does the rebellious biker mentality and homoerotic undertones). THE WILD ONE also introduced the heavy-leather aesthetic to cinema, which is a fashion trend and style that's featured prominently in movies I love, like the aforementioned Kenneth Anger film, William Friedkin's CRUISING, and THE LOVELESS - the latter of which is almost a loose remake of THE WILD ONE.

Now, why I didn't particularly care for this film has less to do with substance than it does style, or lack thereof. THE WILD ONE has obviously lost its shock value considerably over time and, in my opinion, has been surpassed by its imitators in terms of what it brings to the table, so what we're left with is an important but bland film that doesn't really stand out in a major way. I hope I don't offend any of this film's fans or classic cinema purists by saying that; I'm simply stating how I feel about the film and trying my best to explain why. Substancially, there were certain aspects of it that I found to be interesting, like that it could be seen as a cautionary tale of sorts as it relates to young women sending mixed signals to vulnerable members of the opposite sex. As a whole, though, it just didn't really say a whole lot, and I wasn't sure what message it was trying to convey when it was all said and done. Rebellious youths are simply misguided and misunderstood? By saying that, it suggests that it's society's fault that the characters in the film behave the way they do. 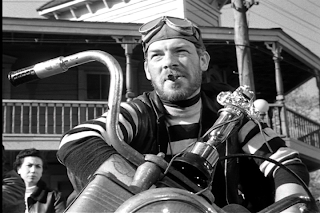 When looked at as fiction and entertainment, THE WILD ONE presents a forgettable story involving a bunch of characters who, at the end of the day, are unlikable. When looked at as a spectacle, it at least has the star power of Marlon Brando, who was rising in popularity at the time. As a novelty, it's interesting to see Lee Marvin in an early supporting role and playing a character atypical of what he later became known for. To look at it through critical eyes, however, I found THE WILD ONE to be an occasionally meandering film that got to be quite repetitive in spots (there's only so much I can take of bikers peeking around corners with mischievous facial expressions).

Not a great film by any standard, but notable because of it being one of Marlon Brando's early films, and because it also featured Lee Marvin showing what was to become his unique acting style. Both were playing supposed rebellious bikers - a role Brando made believable, but film critics were quick to denounce 30 year-old Lee as one of the oldest dead-end kids they had ever seen.
Brando too was unimpressed with Marvin and all through his own career derided him as being a ham. Although I have since heard others nominate Brando for the same award, I for one do not agree on either, thinking Lee's style is unique and one that befits his lanky persona to a T, while Brando - although believable in this and many of his other earlier films - I have grown to disrespect. After such a glorious beginning, he gradually thumbed his nose at the general public and the fawning industry and began to work purely and solely for the unbelievable money he could demand. Using his power, he led producers and directors alike to believe he would deliver a better performance is he did not learn his lines, and he also blatantly lied about his need to research before taking on various roles and was given a massive salary to do just that. Well known as a freeloader, Brando once asked for a further $75,000 to do a tight headshot after he had been wrapped from 'Apocalypse Now' - a film he had already been paid over 5 million dollars for what amounted to a few days work. He did profess to have spent three weeks researching the character, but this was admitted to be a lie by Brando himself. Insecure, yet full of his own importance, Brando managed to bullshit his way through a slew of films, one of which I was fortunate enough to be a part of. It was 'Mutiny on the Bounty' that was shot in Tahiti in the early 60's. Initially I was delighted to meet Brando and be a part of his entourage, but witnessing his irrational behaviour, from overturning his plate of breakfast cereal and storming from the hotel restaurant during an altercation with the producer, to brooding in a brightly painted outrigger in a South Pacific lagoon while being called ashore like some reluctant child by the film crew who had needed him, to dropping in unannounced and then rambling like a tongue-tied teenager to the parents of a 15 year-old Tahitian dancer whom he fancied but who would not fall for his stardom. She did fall later, however, and after he had used and abused her, she ran away to Rome to "further my (one film) career." Not wanting her, but also not wanting her to be had by anyone else, Brando wooed her back. When this was done, he left her in the lurch again, causing her to attempt suicide by slashing her wrists. She is still a well-respected dancer but has never acted again.
Lee Marvin on the other hand has always been a straight-shooter in his dealing with producers and the public alike. His love of deep-sea fishing has brought him to Australia on many occasions, and I have been fortunate enough to meet him in this guise.
The script for the 'Wild One', which I saw in a tin shed movie theatre on the South Pacific island of Tonga, is one-dimensional with some poor dialogue, and I also agree with some of the critics who say Lee Marvin looks out of place in a teenybopper bike gang, but his performance is not hindered, and, although it's a thousand miles away from Brando's brooding Johnny, both add to the film's watchability.