Lovebirds Richard and Eva are on a road trip to a friend's wedding, and along for the ride is third-wheel Simon. As the trip progresses, Richard and especially Eva grow increasingly annoyed with Simon, who spends every single waking moment aggressively recording them with his video camera. Apparently Simon and his girlfriend had a falling out before the trip, which is something that is eventually addressed by Eva, and it's clear that there's tension between the two of them for whatever reason. Anyway, it isn't long before strange things begin to happen, and luckily Simon is right there to capture the bizarre occurrences on video. To be more specific, it seems that everyone they have a personal interaction with throughout the duration of the trip is mysteriously turning up dead. Even stranger is the fact that Simon's camera is picking up ghastly premonitions, a la the distorted faces from RINGU, that aren't visible to the naked eye; only time will tell if there's something supernatural at hand or if there's a much more logical explanation to the proceedings. 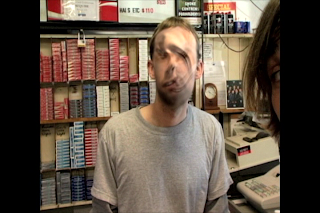 As some of you know, I'm a big fan of found-footage horror movies. The thing is, watching found-footage horror is like gambling when the odds are not in your favor. To be fair, the same can be said for any cinematic trend that over-saturates the market, but when it comes to this particular genre, more often than not, you're gonna get deceitful, blatant cash-ins that are released solely to exploit idiots like myself who will go out of their way to see them. On the other hand, you'll occasionally get some entries in the genre that stand out for whatever reason, be it entertainment value, quality, creativity, or all of the above. I wouldn't go so far as to say that the independently-produced SKEW is the most entertaining found-footage horror that I've seen, nor would I say that it's particularly original, but it's evident director Sevé Schelenz went into this with the best of intentions and some interesting ideas. 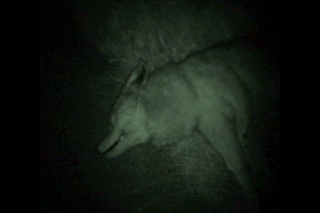 One of the things I talked about in my review of ATROCIOUS (a found-footage horror from last year that I quite enjoyed despite my issues with the ending) was the fact that a suspension of disbelief isn't an option when it comes to found-footage horror; it's mandatory. Even though these films are playing off of the idea that someone essentially found a bunch of rough footage and pieced everything together in order to expose some sort of "truth", the final product usually includes pointless footage of people brushing their teeth, sleeping, driving, walking out of convenience stores, so on and so forth. In my ATROCIOUS review, I also admitted to understanding why these things are there: character development and exposition. SKEW is just as guilty as any found-footage horror movie in that respect, but, to it's credit, the fact that the character of Simon relentlessly films everything is both addressed by the other characters and explained by Simon himself, although I still didn't quite understand his logic. In fact, the camera, as an extension of Simon, is an important part of his character development and the overall story, and it adds a self-referential, "meta" element to the film. And speaking of Simon, he's the only one behind the camera. In other words, his face is never shown, and I think this was a great decision on director Sevé Schelenz's part; it evokes an uncomfortable feeling, in that you're watching something more voyeuristic than a simple documentation of a road trip. To me, there's always been something inherently unsettling about POV shots depending on the context - including porn. 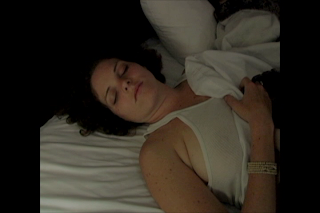 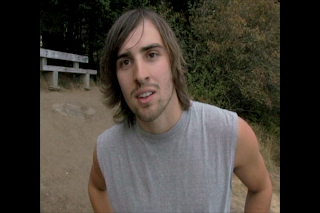 For me, when it comes to found-footage horror movies, an unfamiliarity with the actors is key. For example, while watching PARANORMAL ACTIVITY 2, it was hard for me to take the movie seriously because I knew the lead actress as Opie's wife from the first season of SONS OF ANARCHY. That being said, the cast of SKEW is ultimately one of the more important aspects of the film. They're not non-actors, but there's a good chance a majority of the people who watch this won't recognize them from anything of note. The actors genuinely come across as real friends, and the delivery of dialogue throughout the film sounds fairly natural, but there was a noticeable lack of chemistry between Amber Lewis and Richard Olak. I didn't buy them as a couple, but maybe that's just me. In any event, it's not a big deal.

By this point in the review, it may sound like I'm being generous or making excuses for this film, but I assure you it's not the case. While I wasn't blown away by SKEW, I still found it to be a nice surprise. The film takes its time before getting to the horror elements, focusing more on character development for a good portion of the first half of the film; this can be a disappointment to some, and the downside of that is that SKEW has a tendency to drag for being only eighty minutes long, but I like that it started out fairly normal and got progressively weirder as the movie went on. There are also some very effective jump scares that rely more on sound design and jarring visuals than cheap gags, which, as a horror fan, I definitely appreciate. Sevé Schelenz successfully creates tension out of events that don't necessarily warrant tension through clever editing and by exploiting the camera and cinema verite style. The most impressive thing about the film, however, is that it doesn't necessarily fall into the traps of the found-footage genre. SKEW goes in some interesting directions, ultimately leaving a lot to your imagination and blurring the lines between supernatural and psychological horror, all while playing with the underlying theme of the camera being used as a means of exposing people and objects alike for what they really are. If you're interested, you can check out SKEW on Netflix Instant Watch.