A drug lord named Frank White is released from prison and comfortably eases his way back into his old lifestyle. With his stable of women and loyal henchmen by his side, the manner in which Frank re-establishes himself as the king of New York's criminal underworld is almost effortless. But, with  group of "good cops" (a rarity it seems) determined to take him down, perhaps the jig is finally up for Mr. White. 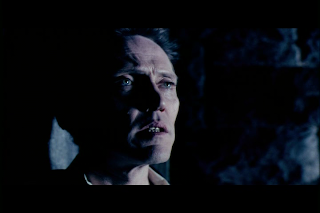 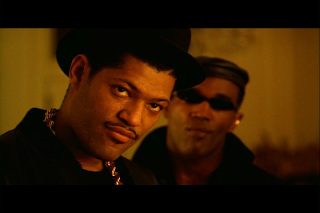 Throughout the film, Frank uses money and strongarm tactics (murder) to place himself as the guy on top of the drug ladder. His main bitch (Janet Julien) is in the city council, so there's that too. Nothing too out of the ordinary as far as the Second Coming of Frank White (or Third or Fourth, depending on how many prison stints he did), but I really like the way his particular story is told - it's very to-the-point and the film thankfully doesn't delve too much into the corruption of the system and explore that aspect of the criminal world. That said, KING OF NEW YORK seemingly doesn't set out to make a commentary on the system. It's a film about characters who range from tragic to irredeemable. It's about the good guys trying to stop the bad guys. It's about shit going south on both sides of the law and who's left standing when it's all said and done. And, of course, it's also a platform for Christopher Walken to do his thing, and when Walken does his thing while in the hands of a director like Ferrara, it's a recipe for awesome. 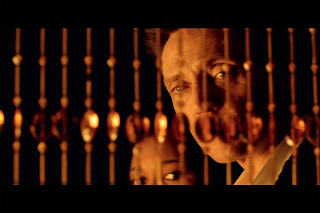 As far as its narrative, KING OF NEW YORK isn't much different from your typical film about a drug kingpin who seems destined to fall from grace, but, as a whole, it's a different animal for a number of reasons. First and foremost, it's directed by Abel Ferrara, which automatically separates it from the pack. I don't know if I'd go so far as to call Ferrara an auteur (some of his films tend to feel anonymous), but if there's one thing he's amazing at, it's capturing New York City in a way that very few filmmakers can. Most - if not all - of his films are set in the Big Apple; regardless of the fact that most of his movies portray the city as a scary, crime-ridden gathering place of sociopaths and people with violent tendencies, he manages to do it in a way that almost feels affectionate rather than critical, like an abusive husband who beats his wife because he loves her. 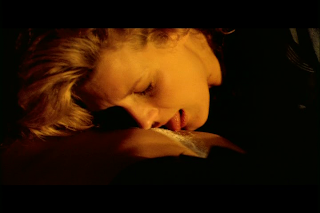 Another thing that makes KING OF NEW YORK stand out from its brethren is that it's shot like an art-house horror movie. While hip-hop is inherently part of the film (something about seeing Walken bust a move to Schoolly D brings me immense joy), KING OF NEW YORK isn't consumed by hip-hop in the same way that other films of its ilk are. The score, at times, sounds like it's straight out of a horror movie, and the visuals obviously play a part in the atmosphere as well. The introduction of Frank White at the opening of the film, for example, is quiet and moody, to the point where it feels like David Lynch doing a crime movie. Fortunately, the stylish opening is merely a glimpse at what's to come; KING OF NEW YORK is visually very slick and cinematic. The cinematography is gorgeous throughout, the shot compositions are beautiful, and gelled lighting is not only prominent but used brilliantly. And speaking of horror movies, not only is there a poster of HALLOWEEN 4 in the background during the opening credits, but FRANKENSTEIN is name-dropped and, at one point, characters are watching NOSFERATU on the big screen. 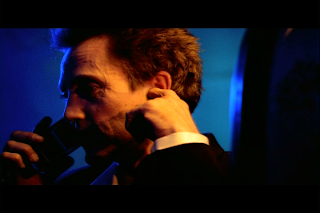 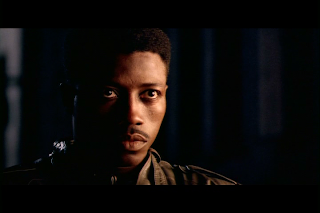 As with a lot of movies of this caliber and from this era, KING OF NEW YORK features a lot of familiar faces aside from some of the heavyweights who play major roles. Laurence Fishburne and a young-looking Steve Buscemi are two of the actors who play members of Frank's crew. Unfortunately, Buscemi (whose character's name is "Test Tube") isn't in the movie for very long, but Fishburne seemingly channels his character from DEATH WISH II and chews the scenery as Frank's main henchman Jimmy Jump. Other actors who turn up are Harold Perrineau as a thug and Giancarlo Esposito as one of Frank's goons. Comprising three of the four main cops are David Caruso, Wesley Snipes, and James Lorinz. Interestingly, Snipes would go on to play a character on the opposite side of the law as Nino Brown in NEW JACK CITY just a year later. As far as James Lorinz, he played the male lead in FRANKENHOOKER for fuck's sake.

Would I call KING OF NEW YORK style over substance? Not necessarily, because while it's not the most original crime film, there's still a decent amount of substance to be found here. The style, though, is what catapults this movie into a bullet-ridden, neon-soaked planet of cinematic and visual goodness that's inhabited by the likes of Walter Hill, Michael Mann, William Friedkin, and even Nicolas Winding Refn for the sake of throwing modern filmmakers into the mix. When it comes to crime films from this era, the two that immediately come to mind are KING OF NEW YORK and NEW JACK CITY. Personally I prefer NEW JACK because of how absurd and entertaining it is, but KING OF NEW YORK is undeniably a treat.