A squad of bumbling cops, led by the ruthless Inspector Cristini, attempt to nab a group of thieves who are in the middle of a string of bank robberies. The criminals are led by the charismatic Dobermann (Vincent Cassel), and comprising the group are a colorful assortment of characters who resemble a cross between larger-than-life comic book caricatures, crime movie stereotypes, and a band of Gypsies who co-exist in a nomadic, family-like atmosphere. 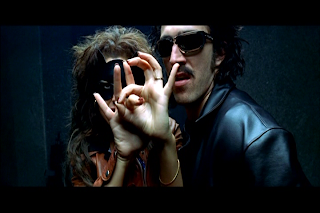 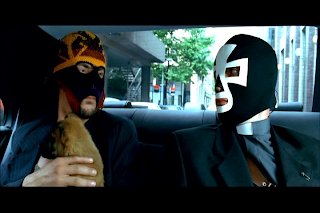 It's established through character development that the criminals are the likable but obnoxious anti-heroes and the cops are the villains. The fact that the people who are trying to uphold the law are portrayed as bad guys isn't necessarily due to the criminals being glorified, but because of how rotten and terrible the aforementioned Inspector Cristini is. Cristini's actions suggest he has ulterior motives in tracking down Dobermann, but I don't believe it's the case; he's just someone who apparently sees fit to deal his own brand of justice, even if it means abusing his power, crossing proverbial lines, and, ironically, breaking many laws in the process. He has nothing redeemable about him, whereas the criminals in the film are at least fun, and the fact that they have Vincent Cassel leading them automatically makes them awesome. 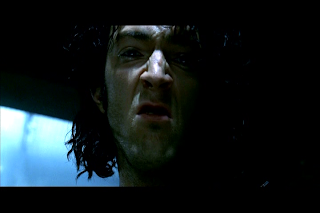 One of the many things that DOBERMANN has going for it is its style. The film is directed by Jan Kounen, who also directed the trippy Acid Western RENEGADE, which also starred Vinny Cass in the lead role. DOBERMANN is a very hyper-stylized and fast-paced film that has all of the flourishes of the typical artsy and ultraviolent crime films: quick cuts, vibrant colors, constant camera movement, extreme close-ups, etc. This is evidenced right from the start when we get one of the best, seamless scene transitions I have ever witnessed: going from Dobermann's childhood to his adult life as a criminal, the camera pans by Dobermann as a baby in his stroller with a gun on his lap to him as an adult holding the exact same gun and pointing it at the camera. It's apparent during this transition that the viewer is gonna be in for a treat, at least on a visual level, because we're dealing with a filmmaker who's willing to go out of his way to create some memorable visuals, regardless of how unnecessary they are. And, of course, anyone who's seen RENEGADE knows just exactly what director Jan Kounen is capable of in terms of visual mind-fuckery. 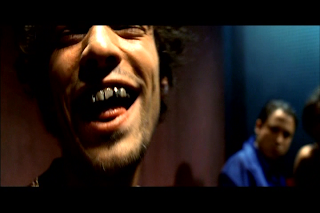 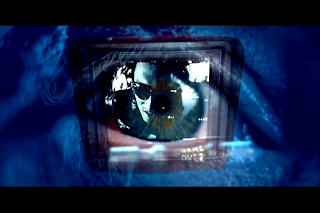 Those who regularly seek out, or at least have a tolerance for films that thrive on style rather than substance will no doubt be impressed with what DOBERMANN brings to the table. Perhaps one of the most impressive things, visually, is that this movie was made in the mid-'90s but yet doesn't appear dated at all. In fact, with the exception of Cassel and Monica Bellucci appearing as young as they do in this, you'd think it was produced within the last couple of years. A lot of credit goes to the high quality of the DVD transfer, but when you put it into perspective, a lot of the filmmaking techniques utilized by Kounen in this film are quite ambitious and ahead of their time for when this movie was produced. Gaspar Noé, who actually has a cameo in DOBERMANN, is a particular filmmaker who came to mind while watching some of the film's more impressive visual sequences. If I have a complaint as far as the visuals, it's that the shaky cam technique was excessive at certain points to the point where the film was almost nauseating to watch.

All across the board, the characters in the film are great. While I wasn't crystal clear on his motives, the psychology behind Inspector Cristini's character alone is worthy of its own write-up. Instead, for the sake of keeping it brief, I'll just say that he's a memorable villain and an undeniably despicable character within what would be considered "proper" for a film like this. In other words, he doesn't do anything blatantly absurd for the sake of getting him over as a heel. Cristini is played wonderfully by Tchéky Karyo. Have you ever hated an actor just because of a certain character the played? Yeah, then he would be that guy in this movie. 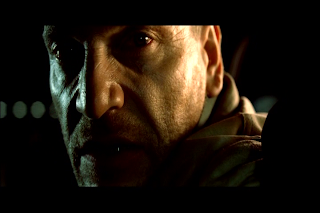 As great as Cristini is as the antagonist, the real treat here is the group of people he's pursuing throughout the film. I've gone on record as calling Vincent Cassel one of my favorite actors working today, if not my absolute favorite. Cassel consistently picks interesting projects and varying roles that give him a chance to showcase his personality and skill as an entertainer, and Dobermann is just one of the many memorable characters on his resume. Dobermann's crew in the film are just as memorable. Cassel's old lady and frequent co-star Monica Bellucci is Nat the Gypsy, a deaf woman who participates in heists. The other characters are all unique in some way, whether it be Sonia the drag queen, Elie Frossard the ass-kicking priest, so on and so forth. Speaking of Bellucci, there's a great scene where she and Cassel are conversing through sign language, and at one point the audio and background noises randomly fade out so that her deafness is emphasized. Like many other things in the film, it was random, but a nice touch. 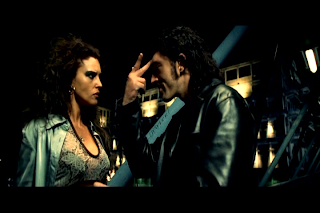 I could spend all day writing about DOBERMANN, but instead I urge everyone to seek it out and see for themselves. As I've already mentioned before, it's a fast-paced, action-packed, stylish crime film full of shootouts and colorful characters. I wouldn't call this a must-see film for anyone who wants to seek it out simply based on the strength of Cassel in the lead role, because while he does get a lot of the focus and plays the titular role, it feels like more of an ensemble piece than a "Cassel movie" per se. However, I have a hard time imagining anyone being utterly disappointed with this film, whether they watch it for Cassel or not. Just keep in mind that it's an extremely talky film, and unless you speak French you may find yourself reading subtitles more than watching the actual movie.