Ángela, a film student who's putting together a thesis on violence in film, gets more than she bargained for when her morbid curiosities lead her to discover an underground snuff film network. When her professor suddenly dies of what seems like a heart attack after watching a particular tape, Ángela gets together with a fellow film student and gorehound, Chem, to preview the mysterious tape, only to discover that it contains actual footage of a former female student of the university being brutally killed by a masked man. Obviously hitting close to home, the supposed snuff tape sparks an interest in Ángela that drives her to investigate the circumstances surrounding it: the identity of the masked man, why this tape was apparently being stored in one of the university's storage rooms, and whether or not the person responsible for making the tape is somehow tied to a string of disappearances that date back a couple of years. 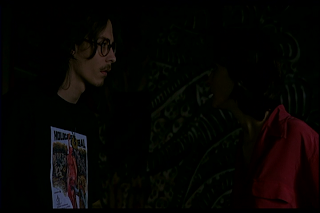 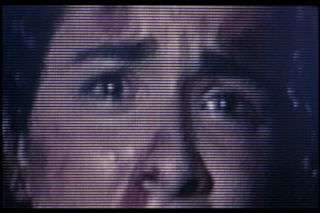 TESIS falls into a small category of films that deal with the subject of snuff movies. While I have no particular interest in snuff movies, I do find films that deal with the topic of FILMS in general to be fascinating. Certain films merely use snuff movies and violence in cinema as a plot point, but director Alejandro Amenábar (OPEN YOUR EYES, THE OTHERS) - in his directorial debut no less - takes a very "meta" approach with TESIS and the subject of cinema. Certain comments are made by characters in the film that seem to be Amenábar's way of expressing his observations and perhaps frustrations with the movie industry ("You haven't got a clue about the cinema.", "It's all about the money.", "Give the public what it wants.").

As a thriller, TESIS is impressive when you consider that it's written and directed by a first-time filmmaker, but on the other hand there are moments in the film that probably wouldn't have been included, or at least had some more thought put behind them if the film were in the hands of a more experienced director. There are a few moments in the film that don't really do anything to further the plot and are seemingly there only to create moments of tension to break up the monotony of the amateur investigation being conducted by Ángela and Chema throughout the film, but even those are well done and effective (an example being the extended tunnel sequence in the bowels of the university).

It can be argued that Ángela herself is symbolic of many things (the jaded film fan who longs for something challenging, the proverbial cat who was killed by curiosity), but one thing I find interesting about her character is that she's representative of this particular film's audience in a way. Like her, we too are constantly discovering new developments in the plot and are gradually being exposed to this unfamiliar world of "real" violence and death. There are some people who can take the side of Chema - an uber stereotype - in that, as a film fan, they've become so desensitized to gore and violence that they're able to look at things from a clearer perspective when faced with impending danger, but it's Ángela's obliviousness and vulnerability that the average viewer can relate to. 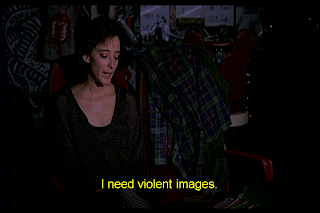 While both characters are watching the snuff film for the first time, there are little moments that speak volumes about the individual characters and sum them up perfectly: Ángela eases her way into watching the tape, opting to listen to the audio first and then eventually watching it through her fingers as she covers her eyes, whereas Chema devours potato chips while attentively watching it, obviously numb to the violence on the screen. Speaking of which, I loved how the snuff footage was slowly revealed to the viewer, but I think it would have been much more effective if none of it was shown and everything was left up to the viewers' imagination.

Aside from being an effective thriller, TESIS also succeeds as a mystery film. It's structured similarly to and features a lot of the conventions of many films that came before and after it, so it's inherently predictable to the more seasoned film fan (and arguably to the casual film fan, but I can't verify that), but at the same time there are enough swerves in the plot to keep the viewer second-guessing until the very end. There's an overwhelming sense of paranoia and uncertainty throughout, with just as much of an emphasis on mood and tension as there is storytelling. Overall, a solid and well-made thriller, but I do have a bit of advice to anyone who plans on watching this: TESIS thrives on its momentum and is best viewed in one sitting without any distractions.