SCHOOLGIRLS IN CHAINS (which went under a number of titles, including ABDUCTED, PLAY DEAD, and plain ol' GIRLS IN CHAINS for the DVD release) revolves around two brothers, Frank and John, who abduct women and keep them locked up in a cellar. Frank, though obviously deranged, is somewhat normal and unassuming in appearance, whereas John is a little "slow" and behaves like an overgrown child. John occasionally raids the cellar and forces one of the girls to play doctor. Meanwhile, the brothers constantly report to "Mommy", who keeps herself isolated in an upstairs bedroom. 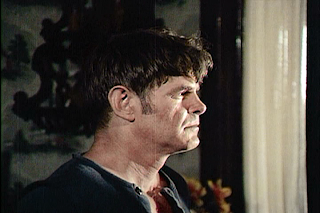 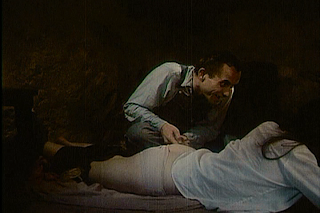 If one were to judge a book by its cover and take SCHOOLGIRLS at face value, they'd probably come to the conclusion that it's nothing more than a low-budget schlocky exploitation film that features women being degraded by dominant male characters. But if one were to actually flip through the pages, they'd find an interesting psychological horror film that shows the unfortunate repercussions of bad parenting, which all goes back to the "Mommy" character, who seems to have some sort of psychological control over her sons. Sure, it might sound pretentious, or suggest that I'm looking too deeply into a film called SCHOOLGIRLS IN CHAINS, but it's actually something that's clearly pointed out in the film and even brought up by the director in a bonus interview on the Code Red DVD. 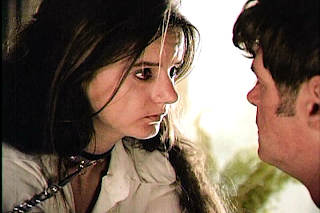 Let's make no mistake about it, though: SCHOOLGIRLS IN CHAINS is still, without a doubt, a sleazy exploitation movie that just happens to have some interesting psychological elements. Even with all things considered, it's obvious that director Don Jones was still intent on making something very exploitative and nasty with this film; there's an amount of female nudity that you'd come to expect from a film like this, and there's even an obligatory rape scene (which had to be cut to prevent the film from getting an X-rating) involving Ginger, the voluptuous female prisoner who's featured the most prominently throughout. Aside from delivering the sleaze, SCHOOLGIRLS is also a very odd film that, amongst other things, features one of the most bizarre musical scores I've ever heard, including a Greek Chorus moment in which the score's composer (and I use the word "composer" loosely) repeatedly says "RUN!" over a light Mr. Rogers-esque piano composition as one of the female characters is being pursued.

With the exception of gore, this has just about everything you could ever want, or at least expect, from a movie like this. The acting is serviceable, and the overall look of the film is reflective of its $48,000 budget. As far as the plot, a couple of new girls are captured at certain points in the film to add to the collection of playthings for the simple-minded John. Things spiral out of control when a concerned boyfriend comes into the picture. There's only so much that the reclusive "Mommy" can do to protect her boys, and her absence comes into play as the film builds to its chaotic conclusion. Overall, SCHOOLGIRLS IN CHAINS isn't an original movie by any means, but it's certainly memorable because of its downbeat nature, general weirdness, and predictable but effective plot twist.