A boy named Frankie is locked in a closet at school by bullies, where he ends up spending the night and witnessing a bizarre paranormal occurrence involving the apparition of a little girl being strangled and eventually carried away by an invisible entity. Later that night, a shadowy black-gloved figure walks into the closet and attacks Frankie, leaving him for dead. Luckily, Frankie's father shows up and saves him, but the incident marks the beginning of a strange and dark journey for the boy; he experiences vivid dreams about death and the spirit world, and experiences ghostly encounters with the titular lady in white and of course the spirit of the dead girl, who pays him late-night visits. With a black man who works at the school being wrongfully accused of the attack and later charged with the murders of about a dozen children who've disappeared over the years (keep in mind the film is set in the 60's), Frankie uses the clues given to him from beyond the grave to find the real killer. Alex Rocco appears in an atypical nice-guy role as Frankie's loving father. 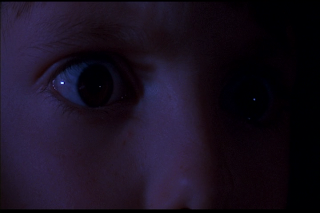 The above synopsis sounds a bit dark and horrifying (OK, well maybe a lot dark), but LADY IN WHITE is a surprisingly lighthearted film for the most part. I went all these years thinking it was a horror movie when it's actually not the case at all. LADY IN WHITE is more of a drama/mystery with elements of a fantasy film. The entire movie is told from the point of view of an author, who we see arriving at the small town of Willow Point at the beginning of the film before proceeding to tell the story that unfolds as the film's plot. Because it's told from the author's point of view and more than likely exaggerated, the film is grounded in reality, but slightly skewed, namely Frankie's surreal dream sequences and certain visual elements that turn up. 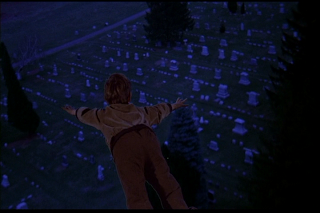 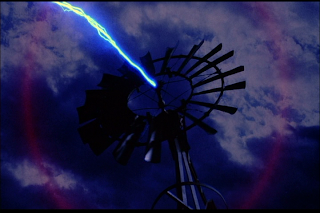 Apparently a personal and almost autobiographical film for director Frank LaLoggia (hence the name of the lead character, "Frankie"), LADY IN WHITE was made independently and without interference from a studio. That being said, the film does reek of a personal project rather than being a case of the director wanting to produce an accessible mainstream film. I completely respect that, but it doesn't make LADY IN WHITE any less overlong and occasionally boring. Coming in at almost two-hours in length, this is a film in desperate need of a trim for reasons that I'll discuss shortly. At the same time, given the nature of the film and the trouble that LaLoggie went through to get it made, it's inherently gonna be a dense film; I assume he wanted to cram in as much as possible, so as to not compromise his vision and story. It would only be fair to judge this movie based on what it is and not what it "coulda been".

As it is, you could easily cut about an hour out of this movie, and it would be just as effective. There are these little sub-plots that keep popping up in the film that have nothing to do with the whole mystery/ghost aspect. For example, there's a recurring thing about Frankie's grandpa sneaking off to smoke cigarettes much to the chagrin of grandma. These scenes provide some comedy and are probably an aspect of LaLoggia's childhood that he wanted to include in the film, perhaps as a tribute to his grandparents, but c'mon. The first act alone is almost an hour long because of the numerous unnecessary scenes in the film. Absolutely ridiculous. 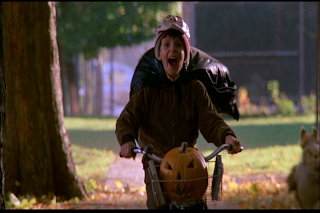 When LADY IN WHITE does stay on track, however, it can be a fun little film. Parts of it feel like a politically-incorrect 80's Spielbergian child-empowerment adventure, and other parts of it feel like old-school Tim Burton because of the visuals and the overwhelming Danny Elfman-esque score (composed by the apparently very hands-on LaLoggia). My favorite scenes in the film involve Frankie and the same two bullies who locked him in the closet at the beginning of the film making late night trips through the woods to a supposedly haunted house, in which dwells the disturbed spirit of the lady in white (played by Mona from WHO'S THE BOSS?). These scenes are the most reminiscent of Burton, which is odd since the Burton film that I was most reminded of hadn't even come out yet. Also present are numerous homages to the classic Universal monsters, which the director are obviously quite fond of. Because of its tone, LADY IN WHITE seems to be targeted towards children, but there are scenes in the film that are undeniably too tense for what I assume would be its target demographic. Hints of pedophilia show up at one point, and the scenes of the girl's ghost being strangled may be enough to scare the ever-loving shit out of the young'uns. 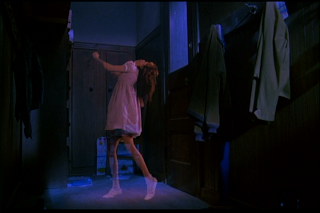 The special effects are very dated, but LaLoggia states on the film's commentary track that he didn't have much money to work with as far as that goes. Speaking of which, the Special Edition DVD for this features a video introduction by the director, and he seriously seems like the nicest dude ever, which greatly affected how I took in most of the film and forgave a lot of its lackluster aspects. Overall, LADY IN WHITE is a film I'd recommend to anyone who hasn't seen it; it's a bit tedious to get through, it's only good for a single viewing, in my opinion, and your patience will be tested numerous times, but it's ultimately an interesting watch at the very least, and the pay-off at the end is well done.