If you're gonna get someone to play a bad-ass bitch in a movie, who better than legit tough-gal and stuntwoman Zoe Bell, whose career highlights include doubling for Uma Thurman in KILL BILL and starring in Quentin Tarantino's DEATH PROOF. Here, Bell plays an assassin named Eve, who survives a gruesome mishap while on the job and is deemed a liability by her employers because of it. As a result, her employers turn on her and conspire to kill her so that she doesn't fuck up again and draw attention to their criminal organization; Eve basically gets wind of this and targets them before they get to her. Throw in a comic book style aesthetic (appropriate, seeing as the film is written by renowned comic writer Ed Brubaker), and that's pretty much ANGEL OF DEATH in a nutshell. 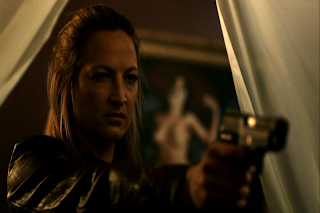 There's an interesting twist to the story in that Eve suffers the side effects from her horrific accident that come into play as the movie goes along. As far as her accident, she gets stabbed through the top of the head; not only does she obviously (and miraculously) survive this, but she's conscious as her jittery doctor (Doug Jones) removes it from her skull. When the accident occurs, she unconsciously shoots an innocent bystander in the face and is subsequently haunted by the ghost of her victim as the movie progresses. Aside from the haunting, Eve suffers from constant disorientation and occasional seizures. It's a pretty interesting idea and one of the many indicators that ANGEL OF DEATH indeed takes place in a pulpy fantasy world. 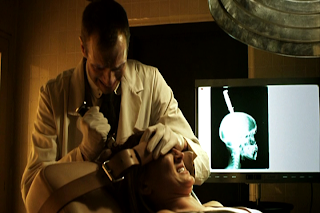 As for Zoe Bell, she's the best thing about the movie in my opinion, and it's good to know that the filmmakers had enough common sense to exploit Zoe's ability to perform stunts and essentially get the shit kicked out of her. On the other hand, Eve is such a tough character that it never feels like she's in any real danger throughout the film. As you watch it, you know it's only a matter of time before she gets her hands on the dudes who wanna kill her and snap their necks, so throughout the film you're basically just waiting for her to get retribution. Seeing as the film is less than 80-minutes long, you'd think it would breeze by, but it wasn't the case at all; not for me anyway. 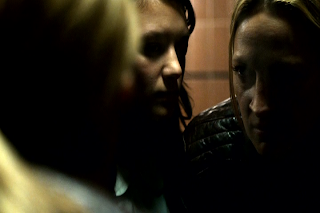 ANGEL OF DEATH lacks the snappy dialogue that it sorely needs. You have these slightly over the top characters in the film, although not to the point where they're caricatures, but yet they're played straight by the actors if that makes any sense. The thing is, it's not their fault, because they're just working with what they got, and, quite frankly, had any of the actors in the film went the scenery-chewing route, it would have been more obnoxious than anything. Ed Brubaker may be a great comic book writer, but his style of writing doesn't really translate well on film. Other than that, ANGEL OF DEATH is just boring and paced horribly. No disrespect to anyone in the film, but Zoe Bell is just leaps and bounds better than the rest of the cast; not so much because of her acting, but because of her presence and charisma. Even Doug Jones, who I don't particularly care to watch in a film if he's not under tons of make-up, is quite good in this as well. Jones seemed to be one of the few who actually "got it" and understood what sort of tone the film needed.

If you're a really huge Zoe Bell fan, if you have a tolerance for the trend of neo-Exploitation movies, or if you're a fan of Ed Brubaker's work, I suppose ANGEL OF DEATH is worth checking out. Otherwise, don't bother, but even if you end up hating it, it will only be seventy-something minutes of your life that you just wasted as opposed to, I dunno, ninety. Also, based on other reviews that I've checked out (which is something I don't normally do), I seem to be in the minority with my thoughts on this film.