THE SIGNAL is sort of a loose anthology film that revolves around the same central characters who exist in the same plot thread, with each of three segments being written and directed by a different filmmaker. Set in the fictitious city of Terminus, the natural flow of technology is suddenly - and without explanation - interrupted by a signal that broadcasts over television and radio airwaves, making whoever's exposed to them overwhelmed with an uncontrollable urge to nonchalantly commit violent acts on anyone and everyone. THE SIGNAL has the tropes of a virus outbreak movie and bears similarities to George Romero's THE CRAZIES, albeit with the gimmick of three filmmakers getting it from A to B and a sweet Joy Division cover to boot. 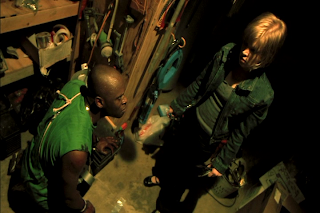 The three lead characters are Mya, her husband Lewis, and her lover Ben. After a false opening, the film introduces us to Mya and Ben as they're laying in bed and making plans to suddenly leave Terminus and presumably embark on a whirlwind romance. However, those plans are thwarted, not just by a jealous and possessive husband, but by a sudden outbreak of The Crazy. When Mya returns home, it isn't long before she notices a sudden and drastic change in personality in the people around her, be it her husband or her neighbors, all of whom proceed to start killing people rather calmly and without rhyme or reason. It begins with her husband taking a baseball bat to the cranium of one of his friends, and, as she makes a run for it, she notices her neighbors gruesomely killing each other. 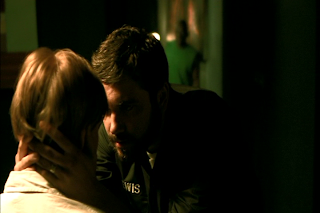 Each segment, for the most part, focuses on each of the three main characters, with a fourth character thrown into the mix as a guide of sorts; not in the sense that the fourth character shows people where to go, but in the sense that he tries to keep them in line and occasionally acts as a spewer of information. What drives the plot of the film has nothing to do with the titular signal. The signal is just something that's there that acts as a catalyst for what's going on. The characters are more or less trying to find each other amidst all of the madness going on, and there are obvious obstacles that constantly prevent them from doing so. It's kind of a love story in a way. 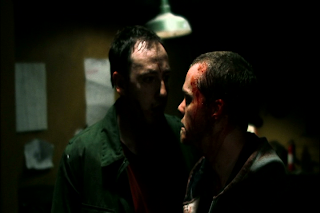 I'm sure that when the people who made this film got together, there was a bit of brainstorming going on and that there was an outline of the plot rather than it being a case of one of the directors finishing the first segment and handing it off to the next guy to see what he could come up with. Whatever the case, THE SIGNAL is fairly smooth, with the middle segment being the only one that kinda sticks out because of its comedic tone. 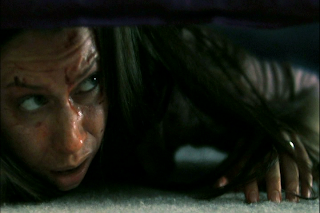 One thing that struck me about the film was how violent it was. It's not gory in the sense that people are ripping each others guts out and playing jump-rope with them, but the violence in the film really packs a punch because of how matter-of-fact it is. You can feel it. Granted the film has its share of people getting mutilated with garden shears, but even something as small as Mya getting backhanded a few times is quite shocking. Another thing of note is how each segment transitions from one to another and how the characters tie into this. There's a decent amount of style to the film, and the acting is pretty good as well, especially from the two male leads AJ Bowen and Justin Welborn. The on-screen rivalry between Bowen and Welborn's characters is great, as the two have a good amount of chemistry with each other. Unfortunately the film tends to meander much more than it should, especially during the second segment. Ironically, it never quite reaches a level of greatness because of the gimmick and, arguably, it takes a tad too long to say what it's trying to say. Nonetheless, THE SIGNAL is still structured really well and is admirable because of its ambition and the idea behind it.