To celebrate their recent graduation from an international high school in Prague, a group of old-ass high school students who represent various parts of the world (Italy, UK, USA, etc.) break into an indoor pool and throw a massive pool party. Everything seems to be going great as the thirty-something teens booze it up and have premarital sex with each other, until the party is crashed by a machete-wielding maniac in a skull mask.

THE POOL is directed and co-written by a German filmmaker named Boris von Sychowski, who went on to work primarily in his native country after this film. It also boasts a couple of actors - as a lot of slashers do - who went on to be considerably more famous than their co-stars and probably now regret making this film; those actors would be Isla Fisher and James McAvoy. Fisher's not exactly a household name, but she went on to star in WEDDING CRASHES, and she's married to comedic method actor Sacha Baron Cohen. McAvoy is probably more of a familiar face these days, having starred alongside Angelina Jolie in WANTED and played Professor X in X-MEN: FIRST CLASS. Both actors play your typical teens in peril in this film, with McAvoy having a much bigger role than the young Aussie actress. I'm surprised Artisan or whoever has the distribution rights to this film hasn't repackaged it with their faces on the cover yet. 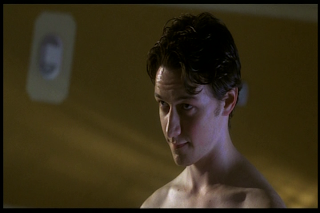 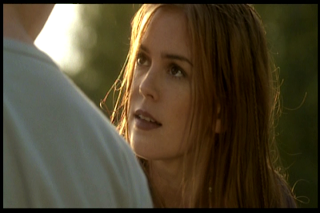 The first (and arguably only) thing worth mentioning is the look of the killer. Basically a black under-armor type of shirt with black leather pants, black biker boots, black leather gloves, and a black hood with a white skull mask. The look doesn't make a lot of sense other than, I guess, that it's supposed to make it easier for the killer to maneuver around at night, and of course the white skull is added for theatrical effect. Even though the look is pointless considering who the killer is and what the person's motive ends up being, it's still an interesting visual element. Unfortunately the lackluster cinematography doesn't do the appearance of the killer any justice; instead of appearing menacing, it just looks like some weirdo running around in a goofy costume. Nonetheless, it's sort of a nice unintentional throwback to Italian Euro-spy comic book characters like Diabolik, Kriminal, and Kilink. 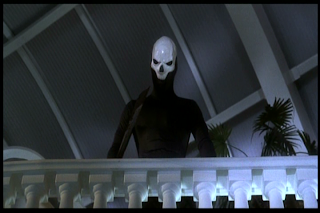 Another area where the film falls short is how it sets up red herrings, but at least they tried. For example, it's be established that maybe one or two of the characters could be suspects, but it's never followed-through with. The mystery element is kinda weak, but, again, at least they gave it a shot. THE POOL is a very formulaic, by-the-numbers slasher, so you're basically just getting fed the usual conventions for a little less than ninety minutes and waiting for the inevitable reveal. Some of the characters are fine, and the group of them as a whole aren't as obnoxious as I was expecting (especially considering that most of them are preppy douchebags), but there weren't really any characters that I liked enough to really get behind, even the "Final Girl". Not a lot of depth to the characters, but they're serviceable slasher movie fodder I guess. 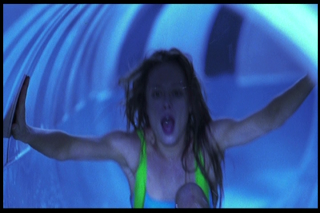 It would be too easy to attack this movie for appearing very low-budget and for some of its laughably bad acting, so I won't (although I guess I just kinda did). THE POOL doesn't attempt to reinvent the wheel and it knows exactly what it is. It also seems like the people behind the film had intentions of making a fun entry in the slasher genre, but unfortunately their seemingly limited resources hurt the film. The script is fine and is really no different than a lot of the post-SCREAM slashers that were given theatrical releases, but the people behind movies like VALENTINE, CRY WOLF, etc. were at least given more money, recognizable actors, and a lot more to work with in general, whereas the flaws of this film are front and center because there's nothing to distract the viewer from them. I will say, though, that there are some decent kills in the film (including one where the chick pictured above goes down a slide and is split in two by a machete that catches her between the legs) and I personally loved the reveal of the killer, who's motive was so simple and uncomplicated that I couldn't help but admire it. I'd recommend THE POOL to slasher completists and as a "if it's on, why not" kinda thing to horror fans who can appreciate low-budget productions, but there's obviously no reason why anyone else should go out of their way to see it.

Oh, and for what it's worth, I didn't figure out who the killer was, mostly because I just didn't have any interest in who it was, but partly because there are about a dozen characters and it's hard to keep track of who's where. Something to keep in mind, though, is that when I went back to watch certain scenes and take screenshots, I noticed that there was actually continuity in terms of keeping the person away from everyone else while the killing was going on, so the reveal actually made sense.