The Potter family has just moved to a new town, the name of which escapes me at the moment. They barely have time to settle in before the breadwinner and patriarch, Dan (played by Dwight Schultz, who would go on to play Murdock in THE A-TEAM), reports to work and fills a vacant position at a home for crazy people. His boss, the pot-smoking Dr. Leo Bain, gives Dan a tour and introduces him to the home's residents, some of whom are essentially inmates who have to be under constant supervision and need to be locked up at night. Among the heavily-monitored patients are a Bible-quoting pyromaniac nicknamed "Preacher", a bruiser and pedophile named Ronald, the extremely shy but violent Skaggs (whose constant nosebleeds have earned him the nickname "Bleeder"), and the natural leader of the group, a batty old veteran named Col. Frank Hawkes.

When the aforementioned patients meet Dan Potter, there's a bit of resentment initially. OK, a lot of resentment; apparently they were quite fond of the doctor he's replacing and aren't too happy with the fact that Dan is there. Being the crazy people they are, they're absolutely convinced that Dan killed their old doctor and took his place, and so they plot to escape and avenge their former doctor. Luckily for them, a massive blackout ensues (which they see as a sign from God), which disables the haven's security system, giving them the opportunity to once again be amongst society and kill a few people who are unfortunate enough to be in their way. With the town's residents rioting and looting as a result of the blackout, the inmates have a huge advantage and are able to blend in amongst society, so they decide to take advantage of it by going on a killing spree of sorts and fulfilling whatever dark desires they have while Dan Potter - though aware of the inmates escaping - is oblivious to the fact that he and his family are in danger. 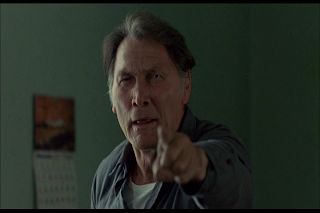 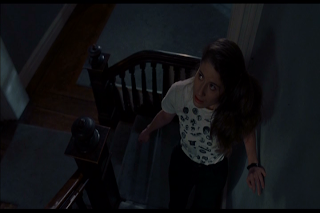 ALONE IN THE DARK is one of the most unique and interesting slashers out there. Not only do you have multiple killers, but two of them are played by future Academy Award winners, Martin Landau and Jack Palance, who also chewed the scenery together in the Sci-Fi Horror movie WITHOUT WARNING. Also, being an early 80's movie, it captures the tail end of the seemingly lengthy transitioning period from the 70's into the 80's. The film itself has certain 70's sensibilities and ideals in that there's somewhat of a socially-conscious message in regards to the nuclear testing that caused the blackout, and of course the casting of names like Palance and Landau in a horror movie at the time was still do-able before the credibility of the genre was killed (in the eyes of critics). But then you also have the character of Dan Potter's obnoxiously-dressed younger sister, who represents the rise of Punk and New Wave in America in light of Disco's demise. One of the highlights of the film is when Dan's younger sister drags he and his wife to a punk club to watch a performance by a theatrical, cardboard-axe-wielding band known as The Sick Fucks. 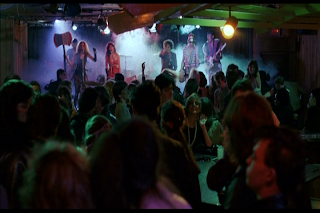 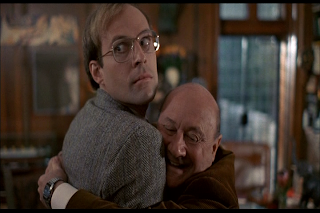 I haven't even mentioned Donald Pleasence yet, who plays Dr. Leo Bain. It's interesting to see Pleasence playing a character somewhat similar to the iconic one he played in John Carpenter's HALLOWEEN a few years earlier, but yet the easy-going and optimistic character he plays here is the antithesis of Dr. Loomis in many ways. In a way, Bain is almost like a bizarro version of Dr. Loomis. Also noteworthy is the character of Bleeder who, at one point, wears a Hockey mask while killing people - a strange coincidence considering this was supposedly made before FRIDAY THE 13TH PART 3, which marks the introduction of the Hockey mask-wearing version of Jason Voorhees. 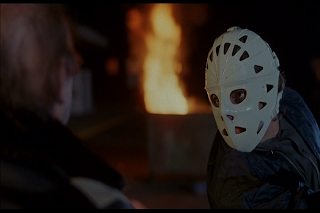 While ALONE IN THE DARK is a body count movie for sure, it's not the type of slasher film where violence and creative-kills are a primary focus. There's actually a sense of dread throughout most of the film despite the somewhat campy nature of the killers. A lot of this has to do with three things: the fact that there's a power outage and - as a result - minimal lighting throughout a lot of the film, the eerie music, and the fact that the killers disappear for a good portion of the movie's back end, which sets the stage for an impending resurgence that could come at any time. The music in particular is quite effective and is very reminiscent of a score you'd hear in an Italian horror movie from the likes of Goblin or Fabio Frizzi; no coincidence considering the composer is indeed Italian.

Between the triple threat of Pleasence, Palance, and Landau (the latter of whom in particular is very over-the-top), the pacing, the music, the superbly-executed final act, the incorporation of crossbows as weapons, and the overall watchability and general oddness of ALONE IN THE DARK, this is easily one of my favorite slasher movies. The conclusion, which I won't spoil, is also unlike any ending in a slasher movie that I've ever seen, and I'll just leave it at that. I've seen this movie multiple times and I honestly can't find very many flaws with it. It does what it's supposed to do and there's barely any time wasted throughout its ninety-minute running time.