13 Questions: Myra of The Evil Streaks

This week's 13 Questions guest, Myra, is vocalist and guitarist of The Evil Streaks - a musical monster mash-up from Massachusetts. Myra and her band combine a number of influences and styles to create their own sound, including Garage Rock, Horror Punk, and Surf Rock to name a few. You can check out The Evil Streaks and buy their latest album TALK TO THE DEAD at the links below! 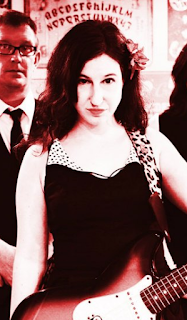 1. Who are you and where are you from?
I am Myra - I grew up in New Milford, CT but currently reside in Lowell, MA

2. Where might people know you from?
I played in a band called Gein and the Graverobbers, as well as Ghouls Night Out and currently Loving singing and playing guitar in the Evil Streaks.

3. When it comes to what you do, who or what are your major influences?
Oh gosh!! So many musical influences: The Cramps, Zombina and the Skeletones, The Sonics, Detroit Cobras, The Go Go's, The Pixies, The Smugglers, The Gossip, The Hives, The Queers, Screeching Weasels, Misfits, Generation X, 5.6.7.8's, Rocket From the Crypt, Tuscadero, Violent Femmes

4. What four peoples' faces would you put on your own personal Mt. Rushmore?
1. Alfred Hitchcock - He changed the way people thought about horror movies. This has made a huge impact on my interests in life. I probably wouldn't have written the same kind of songs if it weren't for him.
2. June Cash - June was so beautiful, inside and out. She rocked out with so much grace and class. Definitely an inspiration to me. There have been moments where I asked myself.. What would June do?
3. Glenn Danzig - I mean he loves his cats, created The Misfits, Samhain and Danizg... Punk/metal legend. Not much else I can say about that.
4. Quentin Tarantino - He helped shaped a lot of 90's pop culture - movies, style, bands..etc. Which has influenced a lot of my garage and surf inspirations.

5. What's the last album you bought?
I think it was Detroit Cobras - Baby.

6. What are the last movies you saw in theaters and on DVD/Blu-Ray?
The last movie I saw in the theater was Django Unchained. AMAZING! The story, the characters, and the acting was all just phenomenal
The last movie I watched on Netflix was VHS. I really liked it. I thought it was kind of long, but it was pretty scary. I do have tons of unanswered questions about it. 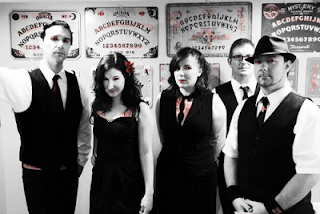 7. What's the last podcast you listened to?
Trick or Treat Radio! Those guys rule. They make me laugh, and I also learn more about the underground horror world.

8. What's the last video game you played?
Mortal Kombat on Xbox 360, Kitan is my go to character. I'm usually horrible at most video games though.

10. What are your favorite sports teams?
I am not really into sports, so I don't really have any favorite teams. But I do enjoy watching soccer (football) and Australian football. You know where there are people usually carried off the field on stretchers and stuff. 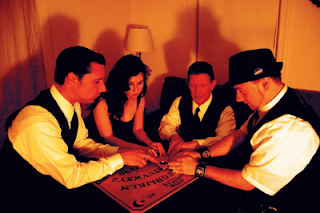 11. What cartoon or comic book character can you relate to the most?
My teenage years was, I think Stormer, from the Cartoon Jem. She was dark and timid but knew her self worth. If someone wronged her, she would figure out a non confrontational way to get back at them. She pretty much got along with everyone and rarely spoke negatively about Jem. 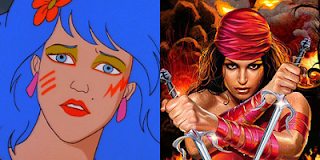 But Lately I think it's Elektra - She gets hit with all kinds of yucky information but keeps moving forward and keeps kicking butt. She never forgets her main goals and main focus.

12. Create a playlist of ten songs that give people an idea of your musical taste.
This is difficult to limit it to 10. Eek! Just so you know I took forever answering this hahaa. Had to delete so many.

13. If you could spend the day at an amusement park with one person from the entertainment industry, who would it be and why?
Kristen Wiig. She just seems like she would be fun to hang out with in general. She wouldn't wine or complain if we had to wait in line... she would just entertain me with silly stories or her stand up. 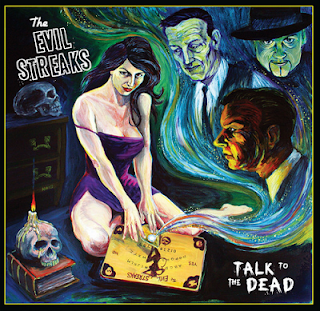