In the fifth entry of the RETURN OF THE LIVING DEAD series and the (sort of) direct sequel to NECROPOLIS, the lead scientist who worked for the evil Hybra Tech megacorporation in the last movie (played by Peter Coyote by the way) is back, and now he's trying to sell the last remaining barrels ot Trioxin to some sketchy guys in suits. They insist he test it out on a corpse to make sure it's the real deal. Well, it works, and the reanimated corpses naturally go ape shit, say "Brains!" a lot, and start eating people. We're also reintroduced to the surviving characters from the previous movie. My favorite character from NECROPOLIS, the nerdy but tough Becky, ditches her glasses this time around but retained her horrible fashion sense. The lead female character from the previous one, Katie, is gone, and the leading man Julian is dating some new chick. 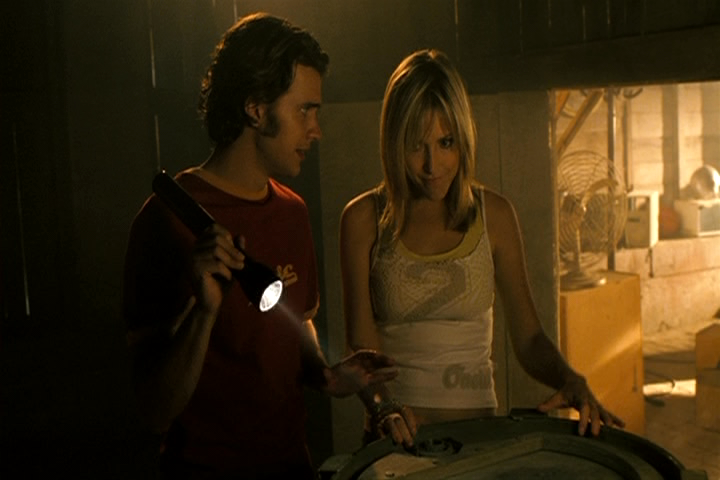 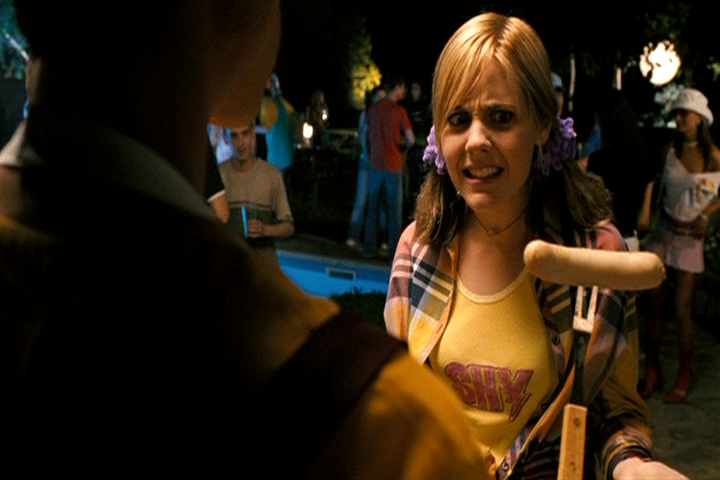 Apparently, with the re-introduction of the main group of characters, RAVE TO THE GRAVE disregards its predecessor in a lot of ways, which is odd considering they were produced back to back. This is evident when Julian discovers a couple of green barrels at his uncle's house (Peter Coyote's character) and seems baffled. So, evidently, the zombie apocalypse they prevented in the previous movie either didn't happen or has somehow slipped his mind. Also, the token black kid from NECROPOLIS, Cody, is now a chemist as opposed to a computer hacker. Whatever. 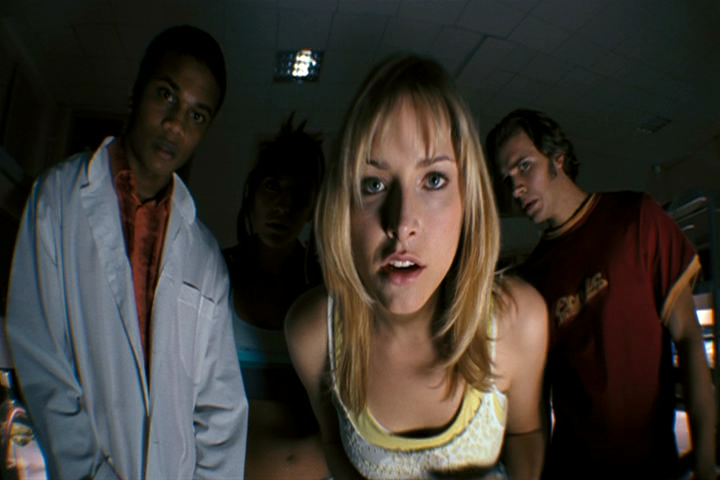 That said, Cody's talents are once again exploited when Julian asks him to find out what's inside the barrel. He discovers that it's indeed some sort of chemical but can't determine what it could be used for. So the annoying druggie of the group (a new character) tests it out and comes to the conclusion, based on the intense buzz he experiences, that it's a drug. With a big Halloween rave coming up, they get the bright idea to convert the chemical to pill form and sell them to whoever's interested. Unbeknownst to them, the "drug" is actually Trioxin - the same compound from NECROPOLIS that turns people into zombies. Trioxin was of course introduced in the first RETURN OF THE LIVING DEAD from 1985, but, in my review of NECROPOLIS, I discussed the differences in its effects. 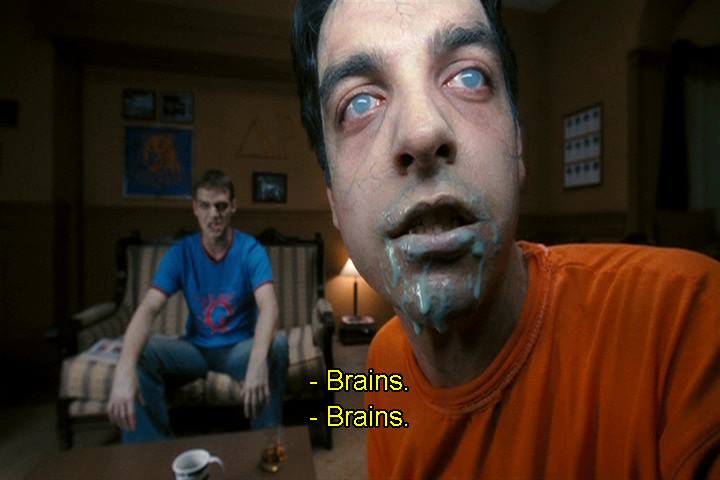 So, it goes without saying that the distribution of the Trioxin drug causes a zombie outbreak. But instead of reanimated corpses, we get unsuspecting drug-users expecting a high and getting an uncontrollable hunger for brains instead. Meanwhile, the same bumbling men in suits from earlier are looking for the barrels. 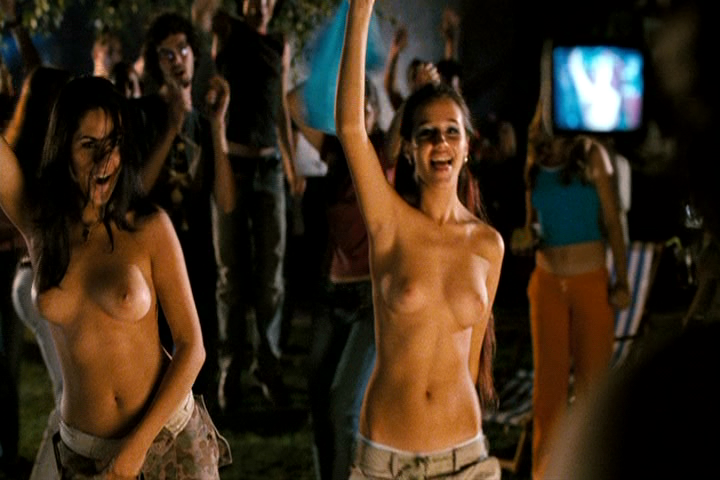 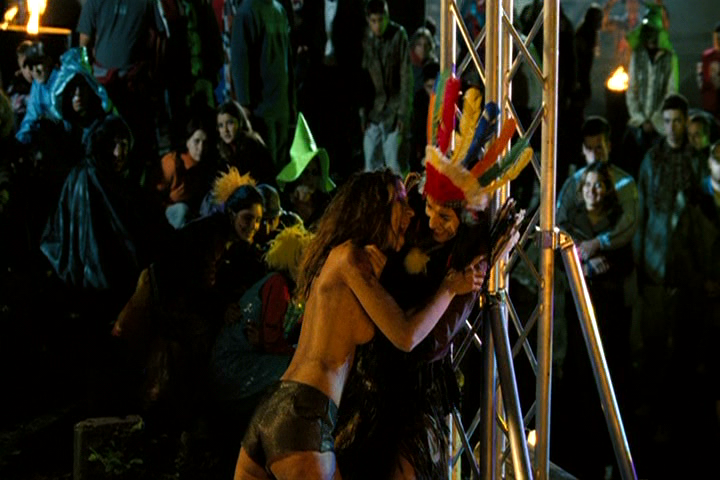 Yeah, so this is pretty awful. I referred to NECROPOLIS as "pointless", but it doesn't get any more pointless than this movie. I don't understand the logic behind bringing back the same cast members and having them play the same characters, only to completely disregard continuity. Why not just introduce a new set of characters played by different actors? Either that or - God forbid - make some minor tweaks in the script to keep the continuity there. Overall, RAVE TO THE GRAVE is just a huge step down in pretty much every area. It makes its predecessor look like DIE HARD by comparison. 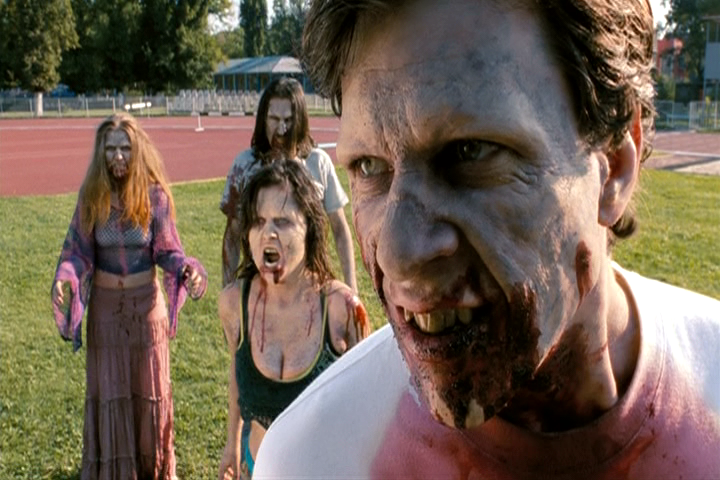 RAVE TO THE GRAVE maintains a goofy, comedic vibe throughout. It tries to be funny on many occasions and fails most of the time. The quality of the comedy itself (and the dialogue) is comparable to a really bad Stoner Comedy. Once the inevitable zombie outbreak really kicks into gear, it's only then that this becomes remotely watchable to me. This climactic section of the film also allows for a surprise cameo from an iconic zombie that I'm sure everyone will recognize, which is only one of the two things that ties this to the previous RETURN OF THE LIVING DEAD movies before NECROPOLIS. We also get some irony when a group of hippie Vegetarians turn into flesh-eating zombies, which I admittedly found to be quite humorous in terms of how that plays out. On the plus side, the makeup effects in this are pretty good. I'd even go so far as to say that the makeup and gore effects are one of the only improvements from the previous film. Finally, if you're like me and get a kick out of seeing Halloween costumes in movies, you'll dig the rave scenes in the third act. There are what look like hundreds of extras all dressed in costumes. But yeah, fuck this movie. Aside from the decent gore and makeup effects, this is one of the worst zombie movies I've ever seen.