Set in Texarkana in 1946, THE TOWN THAT DREADED SUNDOWN is loosely based on the Moonlight Murders, which occurred in Texarkana during a ten-week span by someone known as the "Phantom Killer", who, to this day, has never been caught or ID'd.

The film kicks into gear with a narrator explaining the circumstances surrounding the economic and social state of post-WW2 Texarkana. Suddenly the image of this peaceful community is shattered when an aggressive masked man emerges from the darkness and brutally attacks a young couple on lover's lane; they both survive but the masked man caused some serious damage. Later at the hospital, the masked man is established as a biter when teeth marks are found on the female victim's breasts and body, which makes the now open case all the more disturbing. And just like the real-life Moonlight Murders, the masked man would go on to sporadically kill people and shake up the community in the process. Citizens are suddenly arming themselves to the teeth, and it's safe to assume that this quiet town never expected anything this violent to occur, which is why a bad-ass Texas Ranger was brought in to take charge of the investigation. The Ranger, Captain Morales (played by legit tough-guy Ben Johnson) is based on "Lone Wolf"Gonzaullas. 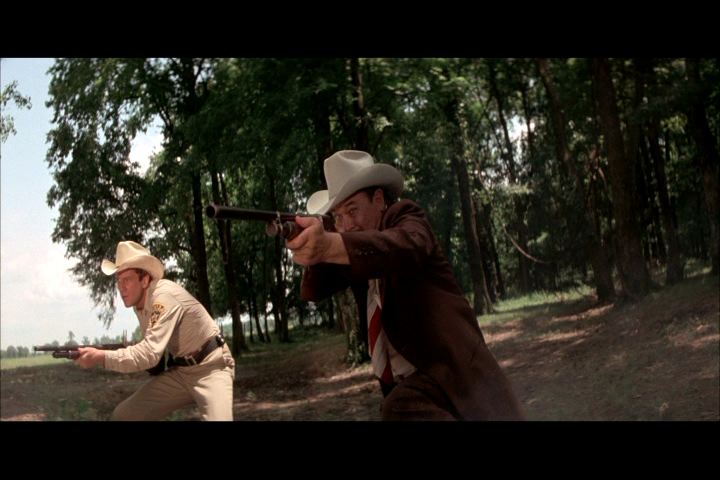 The Phantom Killer (played here by legendary stuntman Bud Davis) is similar to the more well-known Zodiac Killer. The Phantom, seemingly, isn't as methodical or calculated in his crimes as the Zodiac was, but the Phantom targets young couples and wears a similar type of hood that obscured his identity and creates a frightening appearance. Also, despite the diligent efforts of law enforcement, neither of the killers were properly identified or caught. 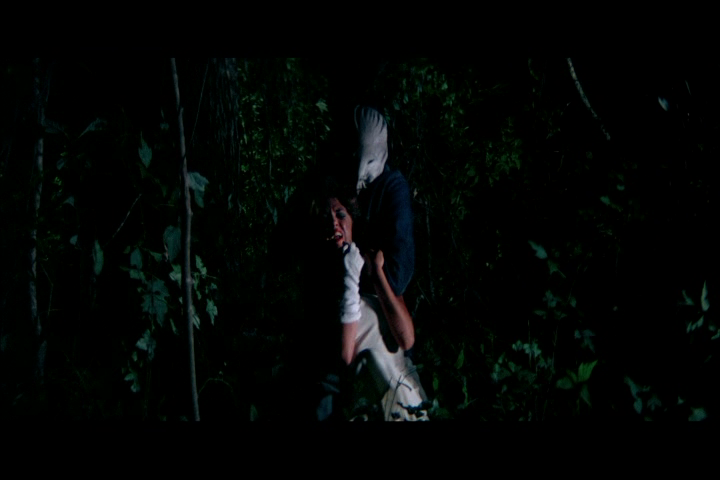 The film goes back and forth between the police procedural element and the long, drawn-out scenes of the Phantom assaulting and killing his victims. The focus on the killer allows for some disturbing and tense sequences. One of the things that makes the portrayal of the Phantom Killer here effective is that he's not exactly swift in how he eliminates the Texarkana residents. He's very much a regular guy who essentially fights his victims as much as they fight back and struggle. While we don't know for sure, we could assume that he never came out of his crimes unscathed himself, which could be the reason why the real Phantom Killer waited three weeks between crimes. The unstoppable slasher movie killers or Horror lore have a tendency to be scary, but it theoretically hits a little closer to home when you're watching a regular dude commit the crimes - especially so when you don't know what his motivations are.

And then of course there's the mask, which is just a simple, homemade hood derived from a sack or some sort of pillow case with eye holes cut out. I can't imagine the mask being easy to breathe in, so it's almost like the killer is suffocating himself during the crimes like some sort of masochist who wants to suffer with his victims. Speaking of suffering, one of the attacks involves a trombone with a knife attached to the end - the Phantom using it like a musical bayonet to fatally wound a woman tied to a tree. It's easily one of the more memorable death scenes that I've ever seen. 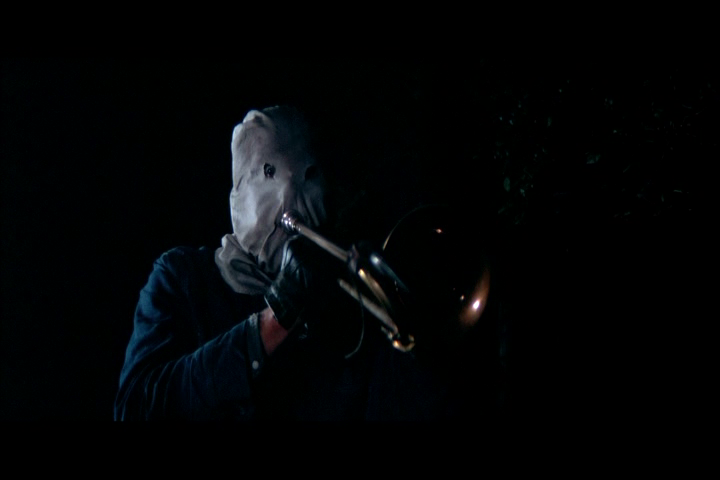 The darkness of the film is contrasted by the comedy of some of the police scenes thanks to a bumbling cop played by director Charles B. Pierce himself, as well as some of the cops dressing up in drag in attempt to lure out the killer. 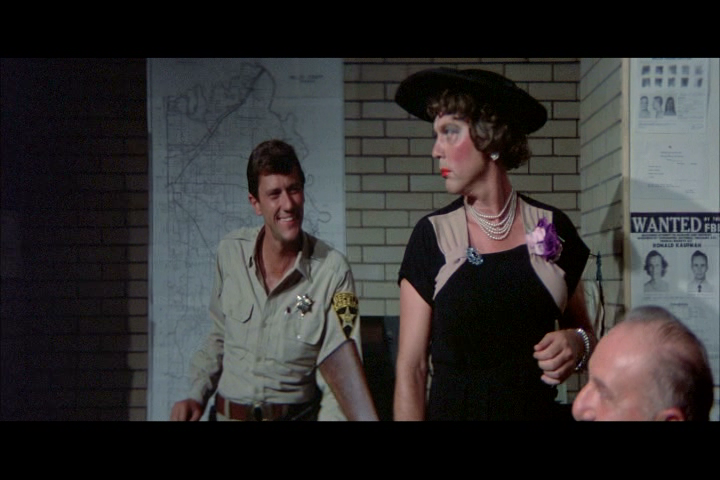 It's also worth noting that the Texarkana Deputy is played by character actor Andrew Prine, who appeared in some cool stuff back in the day - my favorite being his portrayal of the lead character in the psychedelic SIMON: KING OF THE WITCHES. He also appeared in an episode of KOLCHAK: THE NIGHT STALKER and played a deranged Norman Bates-type in BARN OF THE NAKED DEAD. Another noteworthy bit of casting is Dawn Wells (Mary Ann from GILLIGAN'S ISLAND) as one of the victims. 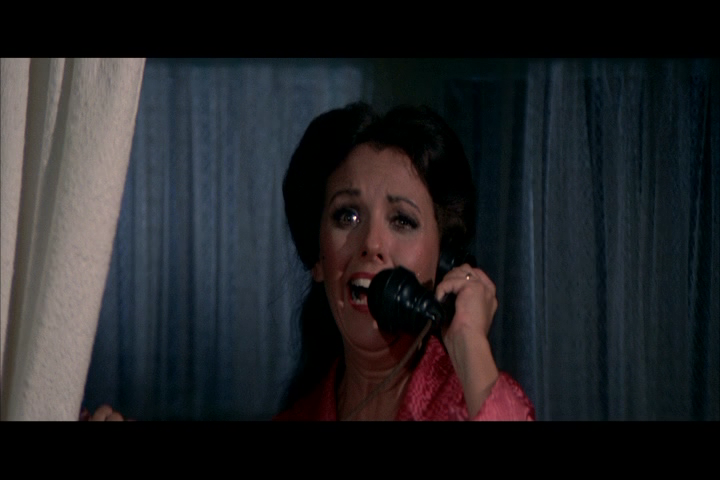 The style of the film is also quite impressive, which is even more evident thanks to a terrific new release from the folks at Scream Factory who did a great job with its updated presentation. It's not a flashy film by any means, but a lot of the night-time scenes (most of which involve the killer) are beautifully shot and lit in a way that looks cool without coming across as something with tons of artificial illumination. In other words, it looks natural but yet visually impressive. The Phantom Killer is also typically shot from a low angle, visually representing his dominance. There are also a lot of ground-level shots of the killer's feet, which may or may not have been one of the few things that FRIDAY THE 13TH PART 2 borrowed from this. Aside from the things I just mentioned, there are even some Peckinpah-esque slow motion shots that aren't really needed but are used to great effect during the climax. 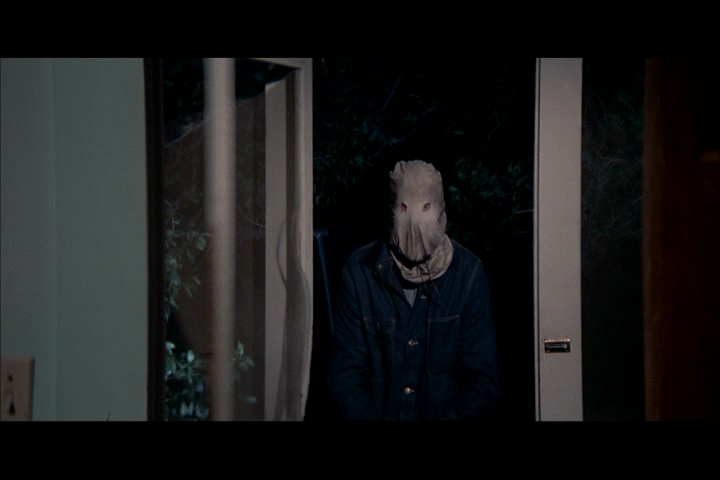 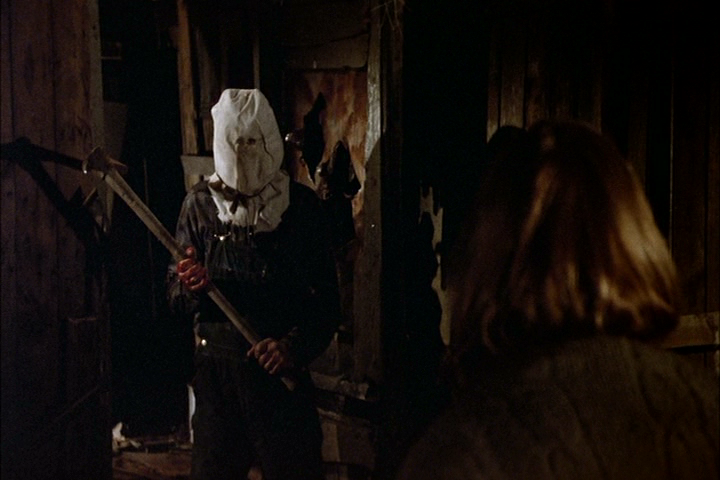 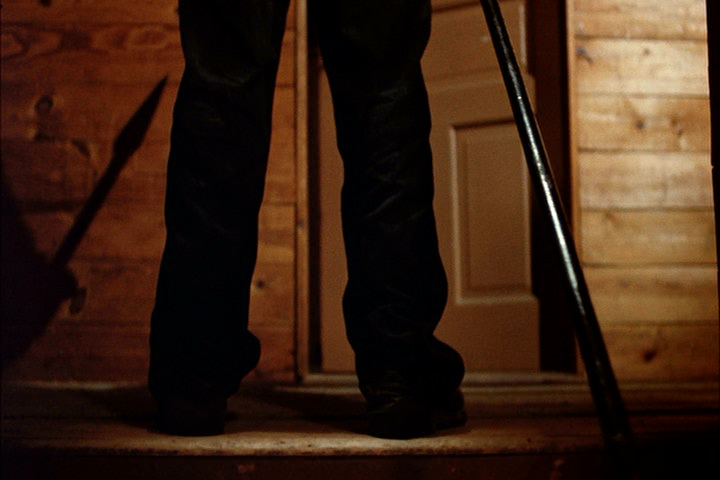 TOWN THAT DREADED SUNDOWN isn't the most well-paced movie (it feels longer than its 89-minute running time), but it's a great proto-slasher (of sorts) that succeeds in most areas where it matters. The cops are very likable and easy to get behind. On the other hand, the killer is intriguing and interesting to watch because of how unusual he is. This is a solid, stylish, well-acted Crime-Thriller/Horror movie that stands the test of time for the most part.