The highly-anticipated fourth film from British director Christopher Smith is set in medieval times and revolves around the actual Black Death plague that killed nearly half of Europe's population in the 14th century. A group of God-fearing warriors, led by Ulric, embark on a quest to destroy a necromancer who they believe is responsible for the wave of pestilence. Joining them on their journey is a young monk named Osmund, who's torn between his devotion to God and his love for a woman. Naughty thoughts! Their destination: a remote village inhabited by the necromancer, rumored to be perhaps the only area in Europe miraculously untouched by the plague. Will faith in God and a vast arsenal of weapons be enough for the warriors to rid the world of this supposed demon, or are they dealing with something far more sinister than they could have ever expected? 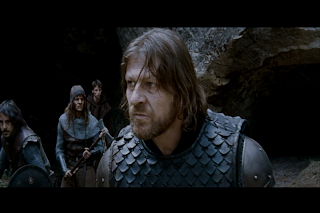 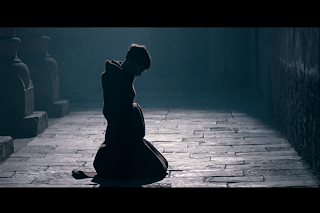 Whether you like Christopher Smith's movies or not (he's hit or miss with me, personally), there's no denying his seemingly natural talent as a director and his ability to realize his artistic visions to the best of his ability. Smith's preceding films have all been consistently solid for what they are, and he appears to be getting better and better with each film. Does BLACK DEATH continue the trend? Personally I prefer his previous film TRIANGLE, but it's unfair to compare the two since neither have much in common. BLACK DEATH is admirable because it doesn't cater to the audience too much, and it shows that Smith trusts his viewers to have enough common sense to where they don't need everything explained to them, be it through title cards or narration to set everything up. You initially get the gist of what the characters are all about, and they're individually developed and established as the film moves along at a nice pace. 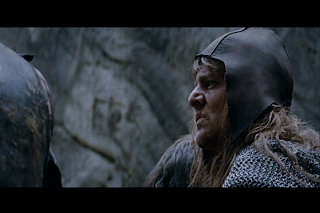 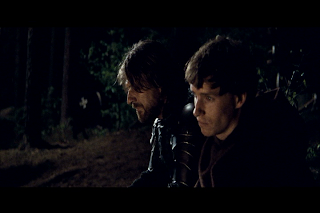 The best thing about BLACK DEATH, in my opinion, is the journey of the characters, which takes up about the first half of the film. Once they reach their destination, already having laid waste to a group of forest-dwelling thieves by that point, part of the focus is taken away from them and placed on the strange group of characters that they eventually encounter. It's fine, but I found the strong momentum of the film to be killed a bit too soon. This turning point in the film isn't enough to take away from the overall experience, but the turn itself, I feel, wasn't as strong as it could have been. Without spoiling anything, I was expecting the film to go in a HOUSE OF THE DEVIL-ish direction at a certain point in the second half, but it ended up not being the case. It came close, though. 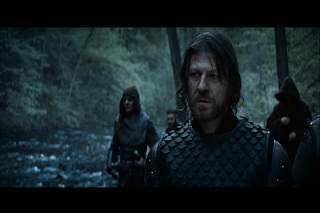 On the bright side, BLACK DEATH has some truly great moments of atmosphere and tension. The film's subtle score, which occasionally features what sound like Gregorian chants, creates a dark tone and a generally unsettling mood throughout. Lead actor Sean Bean may be the film's big draw for a lot of people, and rightfully so. He delivers a strong performance, as does every other cast member. Speaking of which, the chemistry between the cast members, especially those who comprised the core group of characters, was excellent, and the camaraderie between them on screen felt genuine. Lastly, there's a decent amount of violence in the film, but not enough to make it an absurd splatter-fest, thankfully. For the most part, BLACK DEATH is rooted in reality. Overall, a worthwhile and very well done film. To date, Smith's most ambitious film, and best from a technical standpoint.