A newlywed couple, Stefan and Valerie, find themselves stranded in Germany while en route to England for their honeymoon. To kill some time, they decide to spend the night at a fancy hotel in which the sole employee is a bellhop. Strangely, they appear to be the only guests there... until two mysterious women show up, one of whom the bellhop swears looks identical to a woman he checked in forty years ago. Strange behavior ensues, and a potentially quiet night for the newlyweds turns downright bizarre as the mysterious women gradually reveal themselves to be vampires. Countess Elizabeth Bathory and her servant Ilona to be exact. 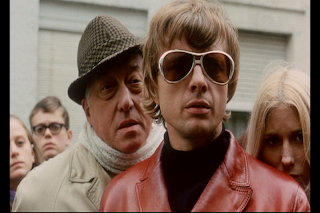 It's no secret that DAUGHTERS OF DARKNESS is a vampire movie, which is kind of a shame since the film plays out as an almost unconventional vampire film with an element of mystery surrounding the actual vampirism. Initially it's quite obvious that the two unexpected female guests are vampires, or so it seems. As the film progresses, it goes to some rather unexpected places in which no real conclusion can be drawn in regards to the motives of the two women, or if in fact they are actual bloodsuckers. Even in regards to the two newlyweds, certain revelations that come out of nowhere are made about the both of them as the film moves along, especially in the case of Stefan, who possesses an unfortunate sexual fetish. 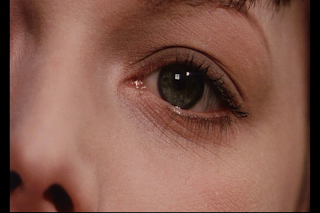 I especially love how the two "vampires" are portrayed throughout DAUGHTERS OF DARKNESS. They're a seemingly tragic couple with an obvious back-story that's undoubtedly there despite it not being fully established. The first impression and obvious conclusion would be that they're a lesbian couple, but is it really the case or is their relationship much more complicated than that? The fact that this question is being raised can be the result of three things: 1) shitty writing in which certain things are established but never explored, 2) brilliant writing that takes advantage of viewer expectations, or 3) accident. I like to think it's because of the second option, but I ultimately lean towards the third.

What would a European vampire movie be without atmosphere? Kinda shitty, that's what. Fortunately, this film has it in spades. There's even quite a bit of symbolism in the film as expressed through color schemes. Red, white, and black are prominent throughout the film, symbolic of blood, life, and death, respectively. And the music. Outstanding. The film opens with an amazing theme that sounds like something out of a Euro-crime film, but with an undeniably sinister horror vibe. The score is consistently great from beginning to end, building tension when necessary and adding a nightmarish mood to the overall product. DAUGHTERS OF DARKNESS is solid from a cinematic and technical standpoint. It's not the most stylish film I've ever seen, nor is it the most atmospheric vampire movie out there, but extremely well done in both departments. 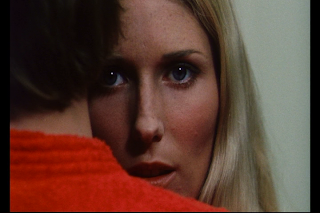 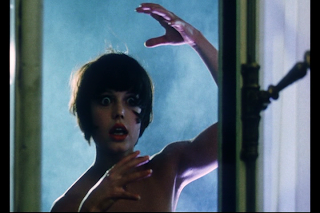 For whatever reason, DAUGHTERS OF DARKNESS is frequently mentioned alongside VAMPYRES. For comparison's sake, I feel the latter is superior in many ways: as a horror movie, as an erotic film (tons more sex, brah), as a representative of the lesbian vampire sub-genre, and capturing that certain atmosphere unique to Euro-horror. However, I believe the former is the smarter of the two, much more engaging, and leaps and bounds better as an overall film. As usual with horror films that are more atmosphere than substance, this one is a bit slow and pretty boring in spots, but this can be overlooked - for me anyway - because there's more than enough to make up for it.