#5 PROWL - One of the films from the recent batch of After Dark releases, PROWL revolves around a young woman who makes a move to the big city and has her friends tag along on a road trip. Well, the road trip goes horrible wrong when they catch a ride with a truck driver and end up in an abandoned warehouse inhabited by bloodthirsty creatures. Based on reviews that I've read, people have argued that PROWL is a worthwhile film, but I obviously couldn't see anything redeemable about this movie other than its interesting plot twist. I found the premise of this film to be decent and somewhat refreshing, but the execution left much to be desired. I didn't like any of the cast members or the characters, and I found the movie to be quite boring. In the end, this will probably go down as one of my least After Dark movies, which says a lot since I'm typically not a fan of their releases anyway.

#4 AMERICAN PSYCHO 2 - What drove me to watch this, I had no idea. This is one of those "why bother" kinda movies. I knew what I was getting into when I did see it, so I really shouldn't talk a lot of trash on it. To be fair, I did try to watch this pointless sequel as a standalone film and made an attempt to not compare it to its predecessor, but I still couldn't find anything redeeming about it other than it being "cute". But, for comparison's sake, it lacks everything that made the first AMERICAN PSYCHO worthwhile: the insanity, the violence, the sex, so on and so forth. I don't really have anything else to say about this movie other than it was extremely "meh". 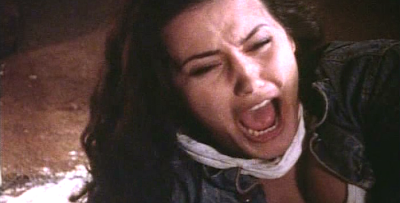 #3 GRIM - A group of concerned residents of a small town investigate a series of tunnels and caves to find the source of what's causing mysterious cracks to appear in the walls of their homes. Instead, they come across a ferocious beast who can walk through walls. Sounds like a potentially good time if you're in the mood for a bad movie, right? Yeah, not so much. GRIM is indeed bad, but not a good, unintentionally funny bad; it's just BAD. I've seen a lot of awful movies in my twenty-nine years on earth, and GRIM features quite possibly the absolute worst group of actors I have ever seen in my life. Explaining why this movie is terrible, or what aspects of it in particular are bad would be pointless and tedious, because everything about this movie stinks. The only thing remotely interesting about GRIM has nothing to do with the movie itself, but rather an actress who appears in it - Kadamba Simmons (pictured above). While her acting abilities were pretty much non-existent, she was a gorgeous woman who tragically died just a few years after this movie was made. You can read all about her story here.

When Canadian director Ryan Nicholson says that his sole purpose of this film was to display obscene amounts of gore, it's hard to fault it for its failure in pretty much every other department. He wanted to make a splatter movie and he most certainly succeeded, creating a relentlessly repulsive piece of work with LIVE FEED. A woman gets a snake shoved down a tube in her throat. Another character is forced to consume a severed penis. But, just because you make a gore movie doesn't mean it has to suck. Some of the great gore movies have some style, or at the very least have a moderately interesting story to tell, but not this one. The acting, the script, and the dialogue are all atrocious and the film ends on such a blah note. Aside from the insane amount of blood and abundance of female nudity, LIVE FEED brings nothing to the table.

#1 BIRDEMIC: SHOCK AND TERROR - Yes. I get it. This movie is supposed to be bad. But, the thing is, there's a difference between cult movies that are "so bad they're good" and a film that's pre-packaged to be a "so bad it's good" cult movie. BIRDEMIC falls into the latter category, and it's simply a cheap way for a no-talent retard like director James Nguyen to make a name for himself. The fact that his plan worked and so many people "drank his Kool-Aid" both sickens and disappoints me. I'm not gonna lie, there were a couple of moments in this film where I laughed out loud, but a good majority of it (I'd say about 95%) is just terrible. I question whether James Nguyen purposely went out of his way to make an inept film with BIRDEMIC, or if he really is that talentless. Whatever the case, this wasn't just the worst movie I watched all year, it was one of the worst movie I've ever seen in my life, and God help me if I ever come across something worse than BIRDEMIC this year.