In BABY CART IN PERIL, the lone wolf himself, Ogami Itto, is hired to eliminate a mysterious female assassin who bears some rather large and distinct tattoos on her breast and back. The reasoning behind Itto's assignment is explained in a latter part of the film, but in order to give you an idea of the person he's sent to kill, the film begins with his potential target, Oyuki, murdering a group of ninjas with ease, while topless and shamelessly displaying her "shocking" tattoos - a "kintaro" groping her left breast and a full back piece of a mountain witch. As Oyuki dispatches the ninjas, the camera cuts to her breasts on more than one occasion as they're painted with the blood of her victims. It's a hell of an establishing scene if you ask me, and the perfect way to set the tone for the bloodsoaked fourth chapter in the LONE WOLF AND CUB series. 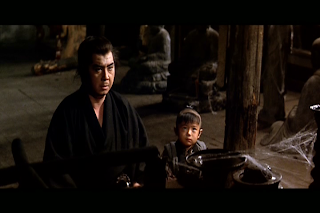 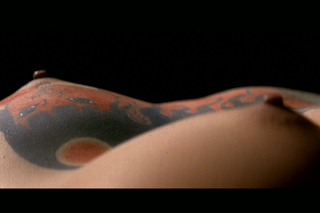 There's actually a lot going on in this for a film that only runs eighty-minutes, but it all begins with young Daigoro (the titular "Cub") getting lost and thus becoming separated from his father. In a scene where I wasn't sure if it was supposed to be purposely comedic or not, Daigoro, while looking for his father, comes across a curious swordsman, who's convinced that the young boy has the eyes of someone who's killed many men and has showered in their blood. The swordsman describing the young boy in such a manner as the little one intensely glares back at him is mildly comedic, but the swordsman is absolutely right in his seemingly far-fetched assumptions - the boy and his father are portrayed as demons who dwell in a spiritual world between life and death. The swordsman, revealed early on as an exiled samurai, plays an important part in the film for reasons that needn't necessarily be mentioned. 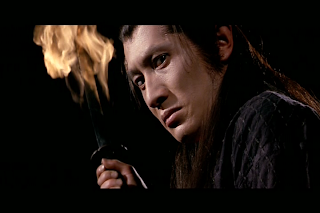 Aside from this sub-plot involving the exiled samurai, Gunbei, well... I don't even know where to start. There's a whole back story on the female assassin, including a monologue that briefly talks about the history of tattoos and their significance in feudal Japan. A character from the first LONE WOLF AND CUB film comes back into the picture, which creates momentum for the running revenge storyline. Speaking of which, there's quite a bit of information to process in a short amount of time in regards to this recurring character from the first film and the reasoning behind Itto being framed. In the meantime, Itto is destroying ninjas left and right; of the first four LONE WOLF AND CUB films, this one might have the record for most severed limbs and decapitations. 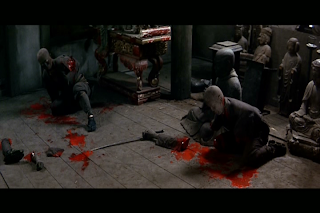 If I have a minor complaint about BABY CART IN PERIL, it would be the anti-climactic pay-offs, and the same can be said about the previous films to a certain extent. Most of the scenes of swordplay are amazingly choreographed throughout the series thus far, but in some cases a feud will build up to a showdown that literally only lasts a couple of seconds, and such is the case with this film. The fact that some of the showdowns with Itto and whatever "boss"es he's facing are underwhelming doesn't take away from the film, but it does leaves something to be desired. Otherwise, BABY CART IN PERIL is very entertaining, satisfyingly gruesome, and a step above its predecessors in terms of resembling an over the top "grindhouse" film.