The master of a Martial Arts school receives a challenge from a group of deadly ninjas who base their style and methods of attack on the five elements: gold, fire, earth, water, and wood (no love for air?). However, the master informs his students that he's suddenly fallen ill from being poisoned and isn't allowed to partake in Martial Arts fighting for "three months" (doctor's orders?), and subsequently locks himself in a room, leaving his students to basically fend for themselves and hold down the fort. But when a large number of his pupils are quickly vanquished by the ninjas throughout a series of levels that span out over the first act of the film, his two best students (one of whom is played by Lo Meng from FIVE DEADLY VENOMS) are left to pick up the pieces and hopefully defeat the clan of ninjas on their own. 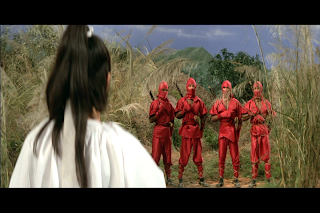 A lot of people throw the words "action-packed" around when describing many a genre film, but trust me when I say that this one is damn near unrelenting in its displays of well-executed and masterfully-choreographed fight sequences. My mind was blown before the opening credits sequence even finished as I witnessed a showcase of sorts involving the aforementioned Martial Arts students taking on members of a rival school. The film doesn't waste any time when it comes to introducing the ninjas either. Instead of explaining exactly who they are and what their motives are in regards to challenging the film's protagonists, the subsequent fight scenes speak for themselves as the students face the unbridled bad-assery of the ninjas, who utilize their devotion to the elements in rather unique ways. Ninjas disguise themselves as trees, burst out of the ground like zombies, and generally incorporate some rather peculiar attack methods. It's like a kung-fu version of Megaman or something, what with all the "elemental" villains and such. 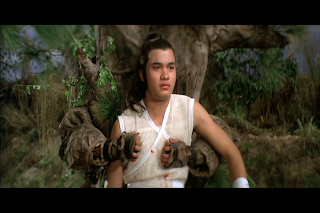 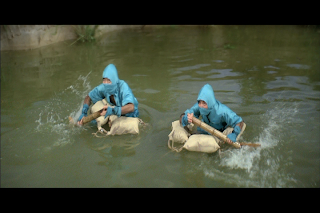 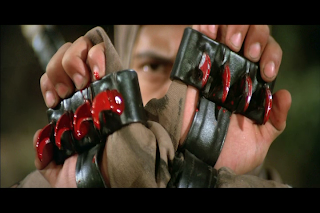 I can't really speak on any of the actors in the film and whether FIVE ELEMENT NINJAS is a great example of any particular person's work - even when it comes to the only person I'm remotely familiar with, Lo Meng. What I can say is that everyone in the film is no slouch when it comes to partaking in stunts and incredibly fast-paced fight sequences involving multiple people at a time. I'd really like to see some of the outtakes and gag reels from these Martial Arts films, or even a mere glimpse at how the actors rehearsed a lot of the fight scenes. It all seems so natural, but I'm sure people got hurt or screwed up on many an occasion.

I hate to use FIVE DEADLY VENOMS as an example, but in my opinion it's a good point of reference for anyone who hasn't delved too deeply into the genre. Like Chang Cheh's VENOMS, FIVE ELEMENT NINJAS is full of colorful, over the top characters. The entire film has a comic book atmosphere about it, which I suppose is inherent when it comes to Wuxia films. Speaking of which, there's a ton of great wire-work in this that never feels overdone, but at the same time it's far from sparing. Another aspect of the action worth noting is the gore. We don't get much of the geysers of blood that seem to be synonymous with samurai films, but there's still quite a bit of blood and gore here, including one of my favorite scenes, which involves an unfortunate ninja's extremities being simultaneously ripped from his body by four of the protagonists.

So it's established that FIVE ELEMENT NINJAS kicks some major ass, but one last thing of note would be how hilarious this movie is. In order to experience the hilarity, one must watch this film not in its natural Mandarin, but rather the English-dubbed version, which features some truly atrocious but entertaining voice work from a group of people who sounded like they were trying to make a mockery out of the film (actually, I wouldn't be surprised if only two people provided the characters' voices). Anyone who watches this with the English dub while the subtitles are on will notice a drastic difference. At one point one of the main characters promises to avenge his brother's death, only for his brother to nonchalantly chime in: "I'm not dead yet." The subtitles read much differently. Good times.