The LONE WOLF AND CUB series comes to a close in the sixth and final installment, WHITE HEAVEN IN HELL, also known as DAIGORO! WE'RE OFF TO HELL. In case you haven't been playing along at home, our lead character and former Shogunate executioner, Ogami Itto, has spent the entire series as a rōnin (a wandering samurai with no allegiance to a particular clan), along with his young son Daigoro, whom he pushes around in a cart that doubles as a storage unit of various weapons, dead set on avenging the murder of his wife and killing those responsible for setting him up as a traitor to the Shogunate. Most of the time, however, Itto has been taking odd jobs as a killer-for-hire, encountering and defeating numerous villains in the process, all while dodging what seems like an endless amount of ninjas and samurai who were sent to assassinate him. 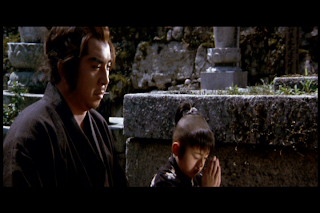 WHITE HEAVEN IN HELL is easily the stand-out film of the series, but not necessarily in a good way. This one focuses on Itto achieving closure and descending further and further into an allegorical netherworld, in which he'll surely come face to face with the person he's been desperately wanting to get his paws on throughout the series. As evidenced in the previous film, and especially this particular entry, the netherworld, of the "crossroads to Hell" as it's often referred to as, may in fact be the real deal and not as symbolic as one would have initially assumed it to be. In other words, this film and the series as a whole takes a surreal turn into supernatural territory.

Apparently the lead villain of the series, Retsudo, has been getting his chops busted by the Shogunate. They've sent many people to assassinate Ogami Itto and all have failed. Clearly out of options, Retsudo summons what appears to be the ghost of his bastard son, Hyoei, who oversees what I assume is a tribe of phantoms in the desolate Kiso-Ontake mountains. Hyoei basically tells his estranged father that he could care less about him or the clan he's associated with, but vows to kill Itto on his own terms nonetheless. Hyoei ressurects three of his finest assassins from the dead, and thus a hunt for Ogami Itto and his son begins. This is only about twenty-minutes into the film, mind you, and by this point we've already been introduced to ghosts and zombies. What ensues, for the most part, is a really slow and atmospheric hybrid of a samurai film and a horror movie... I think. 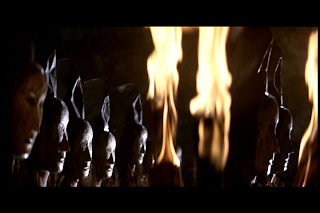 On a side note, Akira Ifukube's GODZILLA theme is used here not once, but twice, which further adds to the "WTF" nature of the film.

Is it safe to say that WHITE HEAVEN IN HELL "jumps the shark"? Yes, but seeing as I've never read the Manga, this could have been how the series was destined to play out right from the beginning. Whatever the case, the fact that this one goes a little overboard doesn't necessarily mean it's awful. It's quite good for what it is, actually, and the final battle sequence which takes place on the slope of a snow-capped mountain is easily one of the highlights of the entire series. Also, the film's final scene is wonderful, and when it was all said and done I couldn't help but be in awe of actor Tomisaburo Wakayama and how much of a fucking bad-ass he's been throughout the series. I found the supernatural elements, however, a little hard to digest, and there were certain moments or actions in the film that made no goddamn sense whatsoever. Despite the bizarre turn that the series ultimately takes, WHITE HEAVEN IN HELL is a mostly satisfying conclusion to an amazing series.

Click the links below to read my thoughts on the rest of the series: