Father Andrew Kiernan is sent to Brazil by the Vatican to investigate an unexplained religious phenomena that ultimately turns out to be a bust, but while he's there he witnesses something miraculous at a nearby church when he sees a statue of the Virgin of Guadalupe crying blood. When he reports his findings back to the Vatican, his superior, Cardinal Houseman, disregards his claims. Ironically, Father Kiernan is a skeptic by nature, but even he's convinced that the odd occurrence in Brazil defies logical explanation. It's during the early scenes of the film that Father Kiernan is established as a man of science, which obviously contradicts his supposed religious beliefs, but then it's later revealed (not a spoiler) that his beliefs are almost non-existent, which makes him yet another cliched faithless priest; it goes without saying that he'll inevitably find himself in a situation where he has to dig deep and get reacquainted with the faith he once had. This is where Frankie comes into the picture. 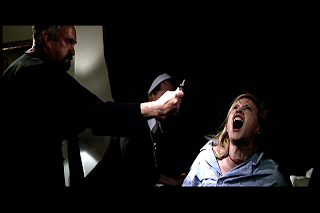 Frankie is a hair stylist who lives in Pittsburgh and works at a salon that doubles as a place where you go to get your nipples pierced and whatnot. She's a bit of a wild child and a self-proclaimed atheist, but yet early on in the film she experiences something typically linked to people who are strongly religious: stigmata. Without explanation, Frankie is attacked by an invisible force and ends up with injuries that coincide with the same wounds that Jesus Christ endured when he was crucified. Another incident occurs on the subway when she's yet again attacked by an invisible force and emerges with wounds across her back as if she's been whipped. Father Kiernan gets word of this and is sent to investigate. Once Frankie realizes she can trust Kiernan, the two develop a friendship that eventually leads to something romantic but not really. Father Kiernan attempts to save Frankie as her attacks get worse, emotionally investing in her in the process. 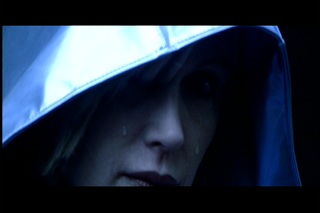 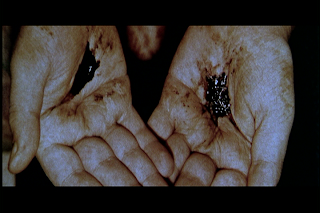 Though stylish, with a decent late 90's electronica soundtrack (if you're into that) and a good performance from Gabriel Byrne, STIGMATA is your typical Catholic horror movie. Not a plot-heavy film by any means, STIGMATA relies on gradual exposition to safely guide it to its predictable destination. Most of the second act is Frankie's crash course on demonic possession, unexplained religious phenomena, and Catholicism in general, with occasional visually jarring scenes of her being abused by an invisible entity, or in some cases abusing herself while speaking Latin in a man's voice. I remember seeing STIGMATA in theaters when it came out and being impressed with some of the film's visual aspects, which is still the case today. Nightmarish visions involving religious iconography appear throughout the film with consistency, and, overall, the film has a very polished, slightly hyperstylized look, complimented by Corgan's downtempo electronic score and thumping electronica music from the likes of David Bowie. Otherwise, STIGMATA is unintentionally silly at times, and in general it doesn't bring anything new to the table in terms of horror movies relating to Catholicism. To be fair, though, you could do much worse. This is one of those movies I'd recommend as a time-killer if you happen to have it readily available.