FIGHT FOR YOUR LIFE is a notorious exploitation film that was banned by the BBFC and included on the infamous Video Nasties list back in the day. To this day, it remains one of the few films from the list to be currently banned in the UK and not given a reclassification. Of course anyone familiar with the Video Nasties knows that all of the films on the list aren't exactly the definitive shock movies of the exploitation era; it was more of a "wrong place, wrong time" kinda thing, as the logic behind some of the BBFC's choices for the 'Nasties list were (and still are) somewhat mind-boggling for a number of reasons. Some of the films on the list, however, do push the limits of decency when it comes to their content, and FIGHT FOR YOUR LIFE is certainly one of the edgier films that the BBFC singled out when they went censorship-crazy.

William Sanderson as Jessie Lee Kane leads a small group of escaped ethnically-diverse convicts as they invade the home of a God-fearing black family. As they hide from the cops and wait for nightfall so they can hit the road, they pass the time by humiliating and abusing the family, and pillaging whatever they can. Kane in particular is absolutely rotten, throwing out every single racial slur in the book and obviously having no governor in terms of how far he's willing to go, as evidenced well before the home invasion when he and his partners rob a liquor store and Kane points a gun at a baby's head. 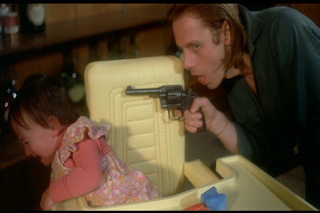 It's obvious that the character of Kane is a racist. There's no disputing that. But it should be said that the criminals in the film don't specifically target a black family; it just sort of plays out that way. When they rob the liquor store, the oldest child of the black family is there buying some booze for grandma, and so Kane and his partners merely seize an opportunity to take her as a hostage. It's when we finally get in the home (which isn't very long into the film) that we as viewers come to the realization that Kane hates the shit out of some black people. It seems that the three criminals are equally cruel, but it's Kane who runs the show and takes more of an initiative to humiliate and essentially dehumanize the family. Some of what Kane does to the family honestly borders on comedic because of how over the top it is, but at the same time you can't help but cringe as some of the action (and dialogue) unfolds. 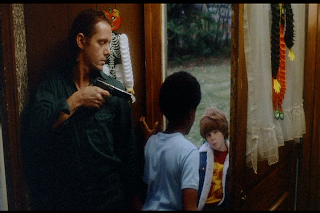 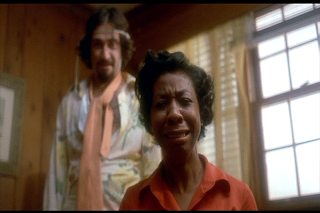 You're basically pulling for the family to turn the tables on their captors throughout the film, but something always prevents them from doing so just when it seems they have the opportunity to stand up for themselves or send out the proverbial smoke signal. The cops come into play as a search for the escaped criminals ensues, but it's not a very important part of the overall story. In fact, I was a bit surprised to see how nonchalant the entire investigation was treated. You'd think there would be a large-scale manhunt (especially when you consider the fact that a cop or two were killed earlier in the film) and that there would be roadblocks and check-points set up, but it's not the case. Instead, a detective is given the task of looking for them, making it appear to be just another day at the office, which I found to be really weird.

For not having much of a budget (in the high five-figure range according to the producer), the filmmakers seem to have made the best with what little they had. It's not a flashy film by any means, and in fact it's visually bland for the most part, but the cast as a whole does such a great job that it's easy to overlook some of the film's technical shortcomings. The score (composed by one of the writers of the film) is also quite good and one of the highlights for me, personally. The editing, though, is a bit odd and reminiscent of films like LAST HOUSE ON THE LEFT and THE CANDY SNATCHERS, in that there are quick, jarring transitions, as well as a ridiculous amount of sped-up footage to create, presumably, a frantic atmosphere. 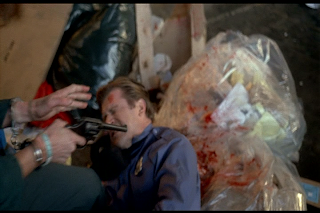 FIGHT FOR YOUR LIFE is one of those movies that makes you realize just how much the exploitation era is something that can't be duplicated in this day and age. Certain filmmakers nowadays, when contributing to the neo-exploitation genre, seem to be concerned more with the aesthetic of exploitation films rather than the content, but, to their defense, the content and style of movies like FIGHT FOR YOUR LIFE and LAST HOUSE ON THE LEFT were very much a product of their time. With as much racist dialogue that's featured in it, a movie like FIGHT FOR YOUR LIFE simply wouldn't be produced today; if it did, it certainly wouldn't go without its share of criticism in this politically-correct climate. If anything, aside from being an essential exploitation film, I'd recommend that people check this out based on the strength of Sanderson's performance.