Death Rattle music correspondent John couldn't knock out an Album of the Week post for this week due to being tied up with some things at work, so here's a bonus Double Feature review! Both movies in this week's Double Feature have the word "Don't" in the title and will forever have the honor of being tied to the Video Nasties list. It's a known fact amongst Video Nasty enthusiasts that some of the films on the list were banned by the BBFC despite not being very graphic. While it's never been verified, I have a feeling that a lot of the movies were chosen strictly because of their titles. That said, I'm not sure why these two movies were banned; the titles are clearly warning people NOT to do stupid shit. I think that should be applauded!

The first film is DON'T GO IN THE HOUSE, which is a MANIAC/PSYCHO-esque character study about a mentally-disturbed man who lives with his dead mother. Lead character Donny works at a factory and doesn't have a social life because he cares for his sick mother who dies very early in the film (in fact, you only see her alive in flashbacks). When she kicks the bucket, he's overcome with a sense of freedom and does what anyone else would do when finding their only known relative dead: play Disco music really loud and jump up and down on chairs. But, to be fair, he does all of that because the voices in his head tell him to. You'd think he'd at least be a little sad to find his mother deceased, but it's eventually revealed that she was domineering and abusive, which explains not only the relief of Donny's mother dying, but of the evident developmental problems that caused him to be a deranged adult. 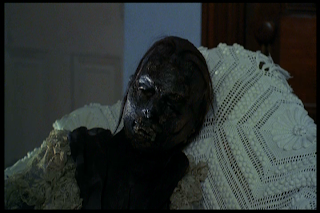 This movie's original working title during shooting was THE BURNING MAN, and it was supposed to have been released as THE BURNING. I'm sure most of you are knowledgeable enough in horror movies to know why that ended up not being the case. Nonetheless, the reasoning behind the BURNING title had to do with the habit that Donny developed following the passing of his mother, which would be picking up young women, bringing them back to his house, locking them in a room with steel walls, and lighting them on fire with a flame-thrower. Good times. It should be said that this isn't a particularly violent film despite what I just described, which is probably why it ultimately got dropped from the Video Nasties list. Nihilistic and occasionally shocking, yes, but there's barely any blood in the film, if any. 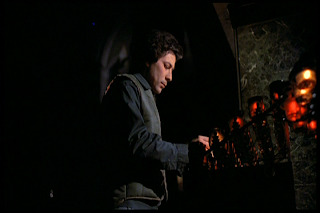 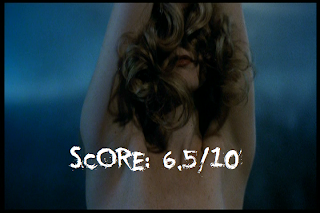 I really don't have a lot to say about DON'T GO IN THE HOUSE. As I said, it's a character study about a disturbed man, and we're basically just seeing him, throughout most of the movie, going through a self-discovery phase and repeating the same cycle of picking up women and taking them back to his house so he can set them on fire. The flashbacks throughout the movie reveal a lot of information as far as why Donny turned out the way he did and why fire plays an important role. The two prominent supporting characters - a priest that Donny confides in and a co-worker of his from the factory - are used well and are a much-need contrast to Donny's awkward and destructive behavior. Two of the film's biggest problems are that it's slow and that actor who plays Donny (Dan Grimaldi) can be seen as annoying. Donny does indeed come across as obnoxious, but I thought the actor who played him was really good considering this was his first movie (he was a stage actor prior to this, which kinda shows in his performance), and at times he reminded me of a young Dustin Hoffman in terms of his mannerisms and look. That's basically all I have to say about this movie. I liked it but probably won't watch it again in the near future and would only recommend it to those who enjoy serial killer/mass murderer character studies, like MANIAC, HENRY, and DRILLER KILLER to name a few. Also recommended to fans of Grindhousey horror movies; DON'T GO IN THE HOUSE definitely falls into that category and it's worth a watch as a curiosity viewing, but I wouldn't call it an essential exploitation movie.

Next up is DON'T GO IN THE WOODS. All of the bad things I'd heard about it beforehand couldn't prepare me for what was in store. This is honestly one of those "you have to see it to believe it" kinda movies, but I'll do my best to describe this utterly inept but hilarious backwoods horror movie.

DON'T GO IN THE WOODS revolves around a group of friends hiking through the woods and being stalked by a mountain man who looks like one of the baddies from Wes Craven's THE HILLS HAVE EYES and wears an obscene amount of animal pelts and weird accessories. As filler, we have even more people who have nothing to do with the lead characters getting stalked and killed in the woods by the same misanthropic savage. 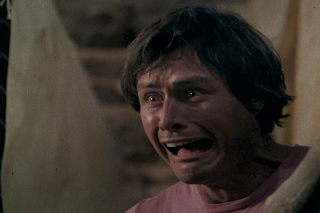 For a movie called DON'T GO IN THE WOODS, there are a shit-load of people in the woods in this, and they're some of the most random goofballs you'll ever see in a backwoods horror movie. The director basically made this for very little money, and the filler scenes of people getting killed were just things he threw together with crew members and non-actors. So, when we're not watching the most awkward-looking group of friends of all time hiking through the woods and telling bad jokes that don't make any sense, we're seeing a bunch of random people being introduced and quickly killed. Just to name a few, we have a birdwatcher, an artist, some old lady in a muumuu (I'm not sure why someone would go hiking in a muumuu, but whatever), and a man in a wheelchair who just might have the most memorable death in the movie. My favorite of the random victims in the movie, though, is the young lady who gets killed at the very beginning, just for the simple fact that she has awesome socks, one of which is pulled up to right below her knee while the other is pulled down to her ankle. 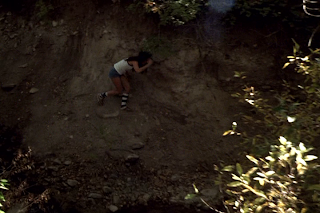 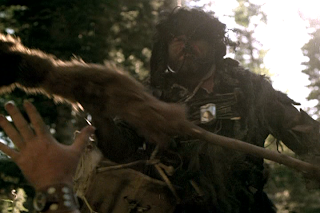 I'm sure what I described doesn't sound much different from your standard low-budget backwoods horror movie, but this film's level of ineptitude is absolutely stunning, and I mean that in the best way possible. DON'T GO IN THE WOODS knows exactly what it is and there's no pretentiousness to it whatsoever. It's also one of those cases of the planets and stars seemingly aligning to create one of those bad movies that simply can't be duplicated no matter how hard someone tries. Basically, what I'm saying is that DON'T GO IN THE WOODS is special. From the hideous but fascinating score that sounds like it was made by the film's killer while on a psychedelic-drug binge to the amazingly bad dubbing (the entire movie is dubbed) to the strange dialogue (favorite lines: "I got some hollow point justice for that bastard" and one of the male leads calling one of the females a "bag of dicks") to the high body count and over-the-top kills (a sleeping bag pinata for starters), DON'T GO IN THE WOODS has more entertaining elements than most movies with thirty times its budget. In a way, this movie is also a treasure of sorts. It would probably still be in VHS purgatory if the director didn't go out of his way to locate the negatives and make them presentable, finally making it available to fans on DVD after many years. 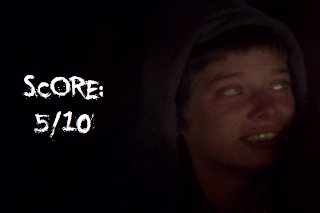 DON'T GO IN THE WOODS was eventually released uncut in the UK. It's a very violent movie, but how one can watch this and take any of the violence seriously is beyond me. I don't know much about the director of this movie, but it's apparent when you watch it that he had a sense of humor. While the kills are bloody, they're so cheesy and ridiculous that it would be hard to imagine anyone watching them and being scarred or sickened in any way. Whatever the case, let's no mistake about it: this movie is terrible. Would it work in a group setting that involved lots of alcoholic beverages? Most likely. But, if someone were to watch this as a curiosity viewing or through critical eyes, it could potentially be torture.