Whenever Halloween rolls around, one of the people I immediately think of is my buddy Matt-suzaka from the Chuck Norris Ate My Baby blog. He usually posts a lot of great reviews and articles every year during his annual "Chucktober" theme during the month of October, and, judging by the pictures he shares, he goes all out at his, uh... HOUSE as well, throwing up Halloween decorations and partaking in the usual festivities that this evil month has to offer. I even got to see some of his Halloween love firsthand at HorrorHound Weekend in September when he went out of his way to pick up some Halloween memorabilia from one of the booths. Dude is legit. So, naturally, when the idea came to mind to do a special Halloween edition of 13 Questions, Matt was the first person I asked.

1. Who are you and where might people know you from?
My name is Matt House, but the internet sometimes refers to me as Matt-suzaka, which is a name I was given after I swore a blood oath to the Demon Aka Ma… well, maybe now's not the time to get into that. Anyway, I do this blog called Chuck Norris Ate My Baby. Thank you for asking.

2. What is your earliest Halloween memory?
It's really tough to say because I feel like a have a bunch of memories that all sort of run into each other, making it difficult to determine which came first. Though, the one that keeps coming to mind is me being dressed up in a karate gi and arguing with my mom about not wanting to wear a jacket. What bad ass karate dude wears a jacket, right?! Anyway, I sort of remember getting in trouble, and I think we didn't even get to go trick or treating.

3. Do you have any Halloween traditions?
I love all the usual Halloween shit, like decorating, carving jack-o'-lanterns, drinking lots of seasonal "beverages," going to Halloween parties and drinking lots of seasonal "beverages," watching horror films, and all that jazz. I also do this Chucktober thing over at my blog, where I basically celebrate Halloween all month long with posts specifically aimed at all things Halloween and horror. It's my fourth year doing it, and it's really become one of my favorite Halloween traditions, for sure. 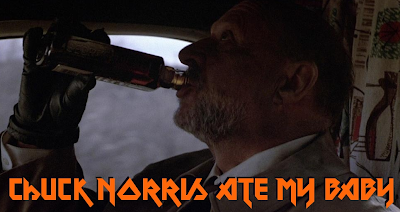 4. What was your worst Halloween experience?
I got supes sick on Halloween like 6 years ago and had to go to the emergency room, something that really threw a wrench into my planned evening of drinking lots of seasonal "beverages."

5. What's your best or most memorable Halloween experience?
Probably the first year I worked part-time at Halloween Outlet, which is a year-round Halloween store out of Worchester, MA. They opened up a seasonal store near my house, so I got a job there doing, well, basically nothing. It was a total blast. The work was cake, the people were cool and my boss would let me give myself my own discounts! In hindsight, that might have been a bad move on his part. Anyway, it was just awesome being surrounded by all that shit at that time. There weren't seasonal Halloween stores like there are nowadays, so it was boner city for me.

6. What five movies would you screen at a Halloween party and why?
Jack-O
Hollow Gate
Trick or Treat
Night of the Demons
Hack-o-lantern

All of these movies are Halloween related, they're wicked fun and all five are pretty much perfect for a party. This is my Halloween B-Movie list, if you will. And even if you won't.

7. What's your favorite Halloween episode of a TV show?
Without a doubt it's Roseanne's first ever Halloween special, BOO! The episode was incredibly influential on my love for Halloween growing up, and to this day, I still dream of one day being crowned "the master!" Also, I still dream of spending an evening with Jackie.

8. What are your favorite seasonal Halloween snacks and drinks?
I'm a fat kid with a crazy high metabolism, so I like Halloween candy, caramel apples, Monster Cereals, and all that unhealthy crap. I also love pumpkin spice coffee with an intensity that can only be matched by a Bengal tiger in heat. Oh, and did I mention I enjoy drinking lots of seasonal "beverages?!" I did, right? Yeah, Octoberfest, Oktoberfest, pumpkin ales, whatever… so long as it's seasonal and liquid, I'll take two. 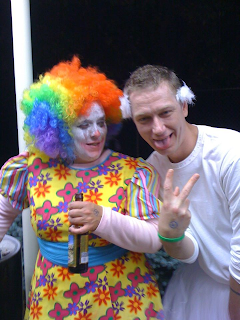 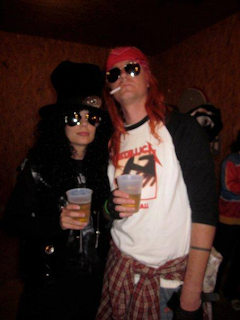 9. What Halloween costume from your past (or present) are you proudest of?
My wife and I went as Slash and Axl a few years back, which made for a great tag team costume. Everyone loved it, though, I was overshadowed by my wife. It's tough to outshine a broad dressed up as Slash.

10. Describe the time you've been the most spooked of something in your life.
I have one that actually happened on Halloween. I was walking home from a girl's house pretty late at night, when a car pulled up all quick like and three dudes wearing masks jumped out and came running at me. Now, I'm not the type to back down from a brawl, but three guys wearing masks was a little more than I'm down with. Anyway, I quickly mentally prepared myself to fight, and get my ass kicked (or worse), and then the guys just all started laughing. It turns out they were a couple of friends from high school. I was quite relieved, to say the least.

11. What's the worst thing you've ever gotten while trick-or-treating?
Blue balls. Or wait, that might have been on Christmas… I'll just say Necco. Those things are idiotic.

12. Create a playlist of ten songs that remind you of Halloween or the month of October.
It's tough to narrow a list like that down, but here it goes…

13. What will you be doing this Halloween?
The old lady and I are going to Columbus to check out this haunted house attraction that's supposed to be "off the meat rack, brah!" Then we're going to some huge party thing called Highball Halloween, which is supposed to be like Carnival and Mardi Gras meet Halloween or some shit. It's our first time going, so I have no idea what to expect, but I'm sure it will be fun. I'm also hoping that we'll be able to catch the theatrical re-release of John Carpenter's Halloween. Halloween is my all-time favorite horror film, so the idea of seeing it in a theater has me salivating!