Like most horror franchises that overstay their welcome, the HALLOWEEN series had become an unrecognizable, violated corpse by the time the eighth installment, RESURRECTION, came out. But, such is the case when studios are involved and the films are being written and directed by different people with each new chapter. If most horror fans understood the financial aspect of making movies and the logic behind the decisions of studios, seeing shit like Busta Rhymes attacking Michael Myers with karate moves while dropping one-liners wouldn't hurt as much. That being said, ones enjoyment of HALLOWEEN: RESURRECTION truly depends on the mindset you have when you go into it. For years, ever since first seeing it, I absolutely despised this movie, but watching it now was sort of a revelation and suddenly having to watch Tyra Banks "act" wasn't so excruciating. 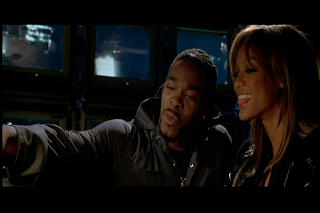 This film's predecessor, HALLOWEEN: H20, ended with Michael Myers being decapitated by the returning Laurie Strode (Jamie Lee Curtis), who had been absent from the series for almost two decades. But, as usual with horror franchises like this one that get milked to death, the producers and filmmakers found a way to bring him back. Laurie briefly appears in this movie as a patient in a mental institution before the story moves on to a new set of characters and another chapter begins. A group of college students are picked to take part in a voyeuristic internet project, in which they have to spend Halloween night in the old house of Michael Myers as they're filmed by webcams. Overseeing the project are Busta Rhymes and Tyra Banks, who are collectively known as "Dangertainment". They watch the actions unfold on monitors in an isolated room and occasionally stage something creepy for dramatic effect. Little do they know, their viewers are gonna be in for a real treat when the boogeyman himself, Michael Myers, returns home and goes ape-shit on these unsuspecting college students. 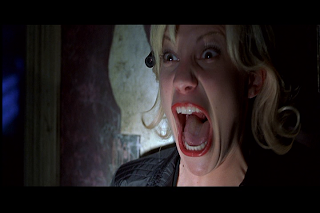 Right away, I was genuinely impressed with this film's opening. It's one of those extended opening sequences that could almost pass for a short film because it has a beginning and an end. An important chapter of the HALLOWEEN series is closed and a new one, for better or worse, is opened. Something I was not impressed with, however, was the shitty info-dumpy dialogue of this opening sequence, but, again, this is something that just needs to be overlooked and accepted for what it is. Once that's over with, we're introduced to the characters who, for the most part, are pretty stereotypical of the usual clowns that are written into slasher movies for the sole purpose of getting killed. The characters here aren't so much unlikable or annoying as they are dumb, but that's a good thing when you consider that the inevitable pay-off will be them getting murdered by Michael Myers. 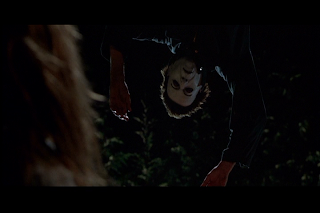 For a movie that mostly consists of people walking around a house and going out of their way to scare the shit out of each other while being stalked by Michael Myers, HALLOWEEN: RESURRECTION is paced well and breezes by. The kills, which are plentiful, are placed throughout the film at just the right moments to keep things interesting just as shit starts to get boring or monotonous. The dialogue in the film may be shit, but whoever wrote this movie truly understands the psychology of slasher movies, or at least did a good job of pretending they do. Even when it comes to how the characters are developed, this movie gets it right. They have to be established as pranksters and dumb-asses for such a premise to work, because how else would a tall guy with a white mask be able to walk around a house full of people undetected? 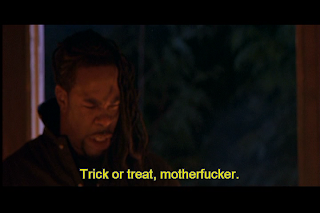 Have you ever seen a victim in a slasher movie pleading with a killer to change his diet and eat less protein? Well, if you watch HALLOWEEN: RESURRECTION, you'll be able to scratch that off your checklist of mind-boggling shit that characters in horror movies do. Speaking of mind-boggling, it turns out that the worthless Final Girl had a cell phone the entire time, but instead of calling the police, she phones a friend of hers who's watching on the internet so she can get a heads-up on where Myers is as she's running for her life throughout the house. Another noteworthy moment comes when Busta Rhymes, like a girl, whispers the lines: "My God. Everybody's dead." Regardless of if you hate this movie or not, if the sight of Busta Rhymes in peril doesn't bring a smile to your face, something's wrong with you. Oh, and let's not forget about the fact that Tyra Banks disappears without a trace and with no explanation about mid-way into the movie. DAFUQ?!?! Yes, HALLOWEEN: RESURRECTION is a fucking mess, but in the most entertaining way possible.