I wanted to do a Double Feature dedicated to David Bowie for the simple fact that he's one of the coolest men on the fucking planet. He's a living legend and he should be honored, and what better way to honor him than by criticizing two of his movies?

In all seriousness, my first exposure to David Bowie was as both an actor and a musician. I first saw Bowie as Jareth the Goblin King in LABYRINTH as a kid, which is easily in my top ten favorite movies of all time to this day, and the soundtrack of songs performed by Bowie will forever give me that warm fuzzy feeling that I get deep down inside when I'm overwhelmed with nostalgia. Technically there are many other actors I should be paying tribute to, but as an entertainer, a performer, and a presence, Bowie is a favorite of mine just on his role in LABYRINTH alone, let alone all of the classic albums he made. Instead of reviewing LABYRINTH and explaining why I love that movie so much, I decided to go with two other films of his that I actually hadn't seen prior to this Double Feature.

First is THE MAN WHO FELL TO EARTH, which was Bowie's debut leading role as an actor. He plays an alien who travels to the United States (New Mexico to be exact) from outer space and assumes the guise of a British man named Thomas Jerome Newton. His goal is to take a large amount of water back to his home planet in the midst of a devastating drought. While here, he gets mixed up in a few things and begins to lose sight of why he came here in the first place. He makes millions of dollars using alien technology and subsequently gets a little too comfortable, eventually becoming romantically involved with a lonely young woman while his family slowly dies back on his home planet. 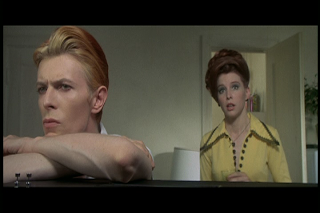 This is an extremely hard movie to write about. For one, it's sort of confusing, but in a good way I guess. As far as the plot, the film spells very little out to the viewer and you really have to use your head to figure out what's going on. I respect that kind of storytelling - the type of storytelling that doesn't dumb anything down and pander to the general movie-watcher, but in this case it's just a bit much. It took me a long time to figure out exactly what the hell was going on, and I honestly didn't even know Bowie's character had come to Earth in search of water until I looked up the film's synopsis online. The exposition and info-dumps here are very vague and show up in the form of dialogue-exchanges that leave out little details and dreamlike sequences of Bowie's character on his home planet. It's also suggested that Bowie has a psychic connection to Rip Torn's character (Torn is great in this by the way), but it doesn't really lead to anything of note other than it being an indicator that the two were destined to meet somewhere down the line.

THE MAN WHO FELL TO EARTH is directed by Nicolas Roeg, who is admittedly a director I'm not super familiar with outside of a couple of other films besides this: WALKABOUT, which is considered by some to be a masterpiece, and PERFORMANCE. One thing he successfully does with this film (as well as in those two movies) is that he keeps it visually interesting. There are a lot of visual similarities between this and WALKABOUT in particular, which was shot in the Australian outback. Right away, you get the sense that Roeg had a fondness for the outdoors. With the lead character in this movie being an alien who's absorbing his surroundings, it gives Roeg and his cinematographer a perfect excuse to capture landscapes (natural or otherwise) on camera without it coming across as too pretentious. THE MAN WHO FELL TO EARTH is a gorgeous motion picture, there's no arguing that. 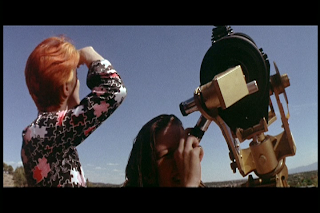 As for Bowie, he serves a purpose here and his role doesn't require much acting. Surely another actor could have done a much better job in the role, acting-wise, but the character of Thomas Jerome Newton was basically tailor-made for Bowie. In his prime, he was an unusual chameleon-like person who had a bit of an androgynous appearance, which makes him the perfect person to play an alien if you think about it. Bowie definitely brings that unusual, mysterious aspect of his stage persona to the film, standing out from everyone else like a sore thumb as he should. For what it's worth, you do get to see all of Bowie in this movie if you know what I mean, and the same goes for the other leads in the film (even Rip Torn, who plays a womanizing professor who goes on to work for a major corporation). 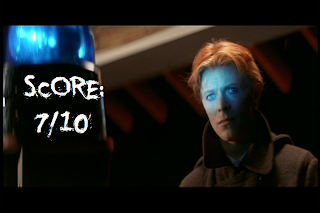 Substancially, the film touches on a lot of things, especially technology and the fear of change versus the acceptance of change. There's certainly a lot to chew on when it comes to this movie. Where the film fails for me is that it falls apart and meanders in the back end, becoming considerably less interesting than the first two acts. The development of Bowie's character and the establishing of the relationships he forms with other people is fascinating, and even as those relationships crumble in some form or another, it's still interesting to watch. But then everything comes to a halt and the story doesn't really go anywhere, building to an ambiguous ending that may or may not have a message. I still haven't figured that out yet.

Next is another movie I've been wanting to see for a while, and that would be THE HUNGER, which was directed by the late Tony Scott. In it, David Bowie and Catherine Deneuve play a vampire couple, John and Miriam respectively. Establishing flashbacks give you just an idea how long they've both been roaming the Earth and how long John in particular has been in the life of Miriam, the eldest of the two by many many years apparently. After picking up a Goth couple from a nightclub and ritualistically feeding on them in the midst of some sexy-times, John apparently contracts a disease that causes him to rapidly age. He seeks the help of a doctor named Sarah Roberts (Susan Sarandon), who specializes in the aging process and is in the middle of a potentially revolutionary project that's still in the trial-by-error phase. Once Sarah comes into the picture, Miriam turns her attention towards her and seeks her out as a new companion to replace the aging John. 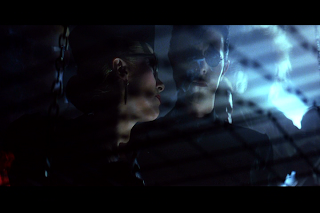 THE HUNGER is one of the more unconventional vampire movies I've ever seen. Gone are the traditional traits of the vampire: the characters here can be photographed, they have reflections, they sleep in beds as opposed to caskets, and daylight doesn't seem to affect them that much. They do, however, need blood to survive, but they don't have fangs. Their method of extracting blood from their victims brought to mind a few other unconventional vampire movies like George Romero's MARTIN and Juan López Moctezuma's obscure MARY MARY BLOODY MARY. It's subtle, but the power of hypnosis (one of my favorite vampire conventions) is also utilized. 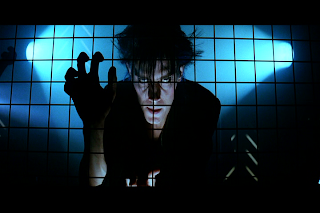 I'm sure I talked about it in other reviews before, but the vampire genre is brilliant, in that there's a built-in mythology and set of rules that can be tweaked and translated in so many ways that are relevant to the nature of humanity. Personally, some of my favorite vampire movies are the unconventional and allegorical ones that use the mythology as a metaphor for anything from a strong bond between two people to drug addiction. I may be stating the obvious or be way off the mark with this comment, but it seems that THE HUNGER uses vampirism as a commentary for the AIDS epidemic and drug-use. Whatever the case, there's a lot to chew on with this movie, and while it's not the most entertaining film (which I'll get to), it's a good conversation piece and a movie that gives you a lot to play with if you were to dissect it. Commentary or no commentary aside, THE HUNGER is sort of a precursor to LET THE RIGHT ONE IN, in that it focuses not on the traditional tropes of the vampire but rather the companionship aspect of being a vampire, the inherent loneliness, and the aging process versus immortality. 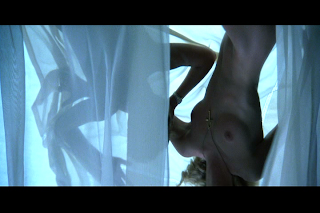 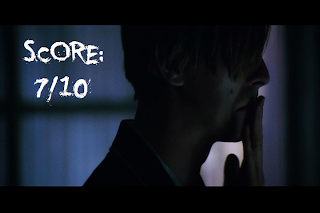 The biggest flaw of THE HUNGER, in my opinion, is that it's a little too slow at times. That and it's seldom that the characters in the film are interesting to watch, and there are a couple of characters who are eliminated pretty early on that the film would have benefited from keeping around a little longer. Dan Hedaya, who appears in a small role as a detective, is also somewhat under-used. One thing that no one can ever take away from this movie is that it's very stylish and easy on the eyes. The opening alone is worth the price of admission. Top notch editing, great imagery, and Bauhaus. Other films and television shows have proven that the music of Bauhaus immediately makes everything that much cooler. Well, THE HUNGER has a huge advantage: Bauhaus is actually featured in the film performing their seminal (and fitting) "Bela Lugosi is Dead" during the impressive opening sequence. For the most part, the film maintains a music video aesthetic throughout without taking away from the dark, romantic vampire atmosphere. Overall, more style over substance with this movie, but on the other hand there's a lot to like here if you're a fan of moody horror and the vampire genre.