While pursuing a mysterious woman, an animate tire kills people using telekinetic powers and subsequently becomes wanted by the police.

One of my most anticipated releases this year was RUBBER, and largely because of the absurd idea of a discarded rubber tire being treated as a main character. I respect any filmmaker who's willing to do something as bold as director/musician Quentin Dupieux did with this film, regardless of whether or not the actual idea translates well on screen. Even if the concept behind it is a bit ridiculous, RUBBER - whether you like the film or not - is a reassurance that there are still interesting artists and filmmakers out there with original ideas.

One thing I can give the film credit for is not tricking the audience. It advertises itself as a film in which the primary focus is a tire that acts at will, and if that alone weren't clear enough as to what sort of film was in store, the actual movie wastes no time in letting the viewer know. It begins with a precursor of sorts that's very David Lynchian in nature, or at least in style. A man (who gradually reminded me of Crispin Glover as the film went on) standing out in the middle of the desert and clutching onto dozens of binoculars. A cop drives up in his patrol car through an obstacle of random chairs that are placed on the road for seemingly "no reason". The cop, played by Stephen Spinella, then gets out of the vehicle and appears to break the fourth wall by addressing the audience and giving a speech that borders on slam poetry about things happening in film for "no reason". The camera slowly moves back to reveal that the film has its own built-in audience (one of whom is played by Wings Hauser), who spend the rest of the film watching the story unfold from afar through issued binoculars. 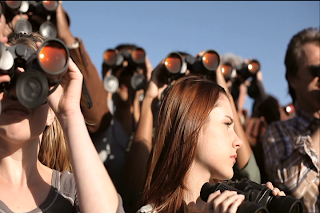 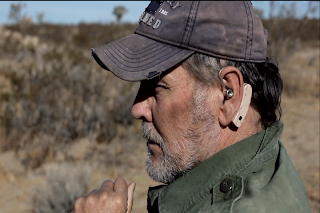 At first I thought of this "no reason" speech as a cop out, and that in a way the film was protecting itself from overly critical audience members with some sort of imaginary No Reason clause. However, as the film went on I didn't really feel the need to refer back to this precursor since the film pretty much played out just as I had anticipated. I will say that initially the film was a lot artsier than I expected it to be, and it took about half of the film's running time before I really got used to the style. The word "pretentious" came to mind, and even more so after the film when I watched the bizarre interview with director Quentin Dupieux as an extra feature on the DVD, but once the film took a turn at about the half-way point, give or take, and there were hints of something that resembled a plot, or at least somewhat of a motive on the tire's part, I found it much easier to let myself be taken ahold of by the film - especially once that wonderful synth score started kicking in.

Ultimately, yes, the entire film is built around this idea of "reason" taking a backseat for the sake of art, but I never felt that the film was being random for random's sake, despite it leading you to believe otherwise. In the context of it being an art film, everything makes sense, because art is subjective. 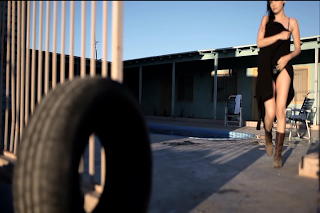 One of the biggest draws for me here, outside of what I mentioned earlier, was French actress Roxane Mesquida, who I fell in love with after seeing the supernatural horror film SHEITAN and the controversial French drama FAT GIRL. Here, she plays Sheila, the object of the tire's desires. The tire, listed in the credits as Robert, proceeds to stalk Sheila after witnessing her driving on the open road and later catching up with her at a motel in the middle of nowhere, where the tire watches her shower and take a dip in the pool. Her role in the film is mostly based on her presence; her lines are few and far between, but her character is just as important as it is minimal. 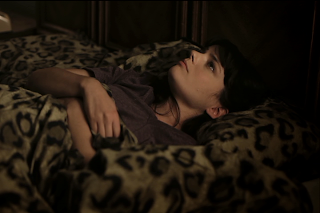 For a film that's barely eighty minutes in length, and for a film that is blatantly about things happening without reason, there's a lot to talk about when it comes to RUBBER: the inherently "meta" nature of the film, the impressive technical aspects, Wings fucking Hauser, the symbolism of the film's ending that apparently means absolutely nothing, and the amazing score by Dupieux (as Mr. Oizo) and Gaspard Augé of the French House duo Justice, so on and so forth. To describe those things in great detail, however, would be A) robbing people of what could be a surprising and positive viewing experience, and B) require more writing, which would cut even deeper into my precious free time. Like any form of artwork, some people will embrace RUBBER and some people won't. Is it a pretentious film? Perhaps, but all art can be seen as pretentious, and it really depends on the eye of the beholder, as cliche as it sounds. 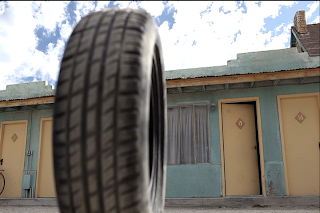 If RUBBER doesn't sound like anything you'd be into, and if you're the type of film fan who likes to play it safe, there's a good chance that there's nothing in this film that will win you over. But, those who - excuse the pun - tire of cinematic trends and want a taste of something unusual would be doing themselves a disservice by not seeing this refreshing piece of cinema.