It's been a little longer than I expected since I last reviewed a ZATOICHI film. In the time since, I've contemplated moving on and abandoning my proposed run of ZATOICHI reviews, partly due to a lack of interest, but mostly due to me falling behind on other shit, including a growing "to watch" pile and - *gasp!* - a book that I'd like to get crackin' on. But seeing as I'm constantly changing my mind about shit, I thought I'd stick to something for once and at least cover a few more of these films before I call it quits. After watching this particular film, however, I'm in no rush to give up on my man 'Ichi just yet.

Unlike the other two ZATOICHI films I've reviewed so far (3 and 6), this one doesn't have much going on in terms of plot, which is fine with me. Zatoichi rescues an infant whose mother was killed in an assassination attempt intended for him. He somehow finds out the identity of the child's father (Nobuo Kaneko) and vows to deliver him the baby. In order to complete his mission, he needs to travel to a far away village, all while dodging a group of assassins who were sent to kill him (most likely for financial reasons, seeing as he's a notorious gambler and all). Along the way, he hooks up with a female thief and the two become unlikely allies; unlikely because Zatoichi - being a blind man, obviously - would be a prime target for a thief, but she ultimately takes a liking to him and gradually (and, at first, reluctantly) assumes the role of temporary mother to the child. 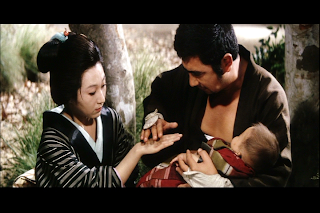 The plot builds to two things: the reunion of the infant and its father, and an inevitable showdown between Zatoichi and the group of assassins. Not much goes on in the meantime, but the film seems to hit the same beats that fans of the series are probably familiar with. For example, there's a gambling scene in which Zatoichi outsmarts and surprises a group of strangers who try to take advantage of his blindness. There have been similar moments in the previous films that I've seen, so I can only assume that it's a recurring theme.

FIGHT, ZATOICHI, FIGHT, as expected, looks absolutely stunning throughout. It's also a quiet film, with the music few and far between but effective when used; the song that plays over the opening credits squence (in which the camera focuses solely on Zatoichi's feet as he almost steps in a pile of shit) is very reminiscent of Spaghetti Western music and does a good job of setting the tone, As far as style, this movie knocks it out of the park. Otherwise, I honestly had a hard time keeping my attention on the film. There wasn't a whole lot about it that grabbed me, but that all changed as the story started to wrap up, and by the time it was over I was in complete adoration of actor Shintarô Katsu. Without giving away too much, there are some very touching, emotional moments involving Zatoichi and the child towards the end of the film. 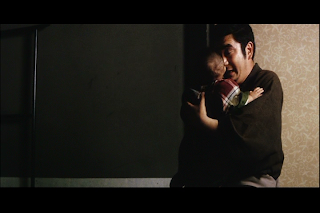 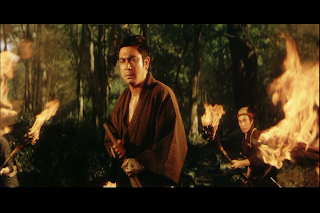 The aforementioned bonding moment between our protagonist and the child is followed by the showdown between 'Ichi and the assassins that the film builds to, and holy fuck does it pay off. The violent (but bloodless) climax is one of the most amazing things I've ever seen, for the simple fact that parts of Shintarô Katsu's body are ON FIRE as he's defending himself against what looks like a group of thirty to forty people armed with swords and torches. In one particular shot, one of the torches comes dangerously close to Katsu's face - so close, in fact, that I'll be shocked to find out he didn't at least suffer first degree burns while shooting it. Directed by Kenji Misumi of LONE WOLF AND CUB fame, FIGHT, ZATOICHI, FIGHT is worth seeing for this scene alone, but a worthwhile film overall.