Based on a story by Richard Matheson, STIR OF ECHOES revolves around a working class father and husband, played by Kevin Bacon, who involuntarily taps into the spirit world after being hypnotized at a party by his sister-in-law and begins to have ghoulish hallucinations that may be tied to the death of a teenage girl who lived in his neighborhood.

It's been years since I saw STIR OF ECHOES - so long in fact that I forgot what it was about, other than it having to do with ghosts. In keeping with a tradition of cinematic ghost stories, this one features the convention of a family being affected by paranormal happenings. It's a convention that unfortunately renders many of these types of films as being all too familiar (and predictable more often than not), but it always works, and depending on how many people are in a particular family that acts as a film's focal point, it gives the filmmakers a lot to play with in terms of what happens to who. 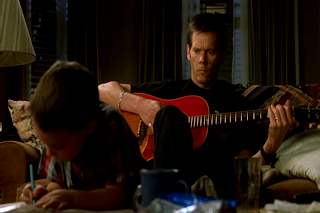 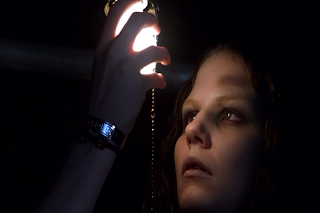 Most ghost stories are inherently cliched and littered with the same old scare tactics. STIR OF ECHOES is no exception, but it still stands out for a number of reasons. The setting of Chicago in particular is great, as are the main characters. Thanks to the chemistry between the actors and how the characters are written, the family in the film seems genuine. I find most families in paranormal films to be obnoxious because, in most cases, they're usually all happy and getting along well in order to contrast the dark events that inevitably take place later on in the film. I come from a fairly dysfunctional family, and on a personal level I can relate a lot more to characters in films who are struggling in some form or another, be it with personal issues, financial problems, or to maintain some sort of order within the family structure - and I'm not talking about the pushover father trying to connect with his bratty teenage daughter who rebels for no particular reason. I wouldn't call the family in this film "dysfunctional" per se, but there's a level of reality there that I appreciate. Kevin Bacon's character is a working class guy who has delusions of being a musician, and you get the sense that reality and his age are finally catching up to him. He's not the husband and father he envisioned himself as, and now he has to come to terms with it. His wife, played wonderfully by Kathryn Erbe, isn't necessarily the bread winner, but she's still the backbone. Anyway, enough about them. 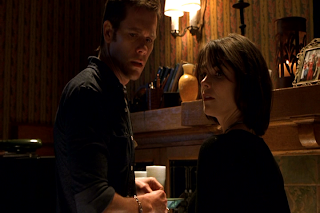 STIR OF ECHOES is all over the place in terms of its tone and what it wants to be, but it's feet are still planted firmly in paranormal territory throughout. Overall, it's a nice balance of thriller, horror and mystery. The few lighthearted and slightly comedic moments are in just the right places, so as to not kill the tension and take away from the seriousness of the story. And, to be fair, if one were to watch this through the eyes of a casual film fan as opposed to watching it from a more critical perspective, the most you could ever want from STIR OF ECHOES is for it to be scary. That being said, the spooks in the film are well done and don't feel overly cheap. The first act in particular is quite eerie, especially the scenes where Bacon's character's son has conversations with thin air. The initial scene of hypnosis is tense and fucking chilling. In the big scheme of things, STIR OF ECHOES pales in comparison to some of its creepy counterparts, but it's a solid and entertaining effort nonetheless.