After a night of partying on Bourbon Street, a group of friends get into a car accident "somewhere in Louisiana" and discover the bloody body of an unknown man amidst the wreckage. Strangely, he's already wearing a hospital gown. How convenient. It isn't long before an ambulance shows up and a couple of sketchy-looking paramedics transport everyone to a hospital that appears to be completely empty if it weren't for the Nurse Ratched-ish receptionist, played by Jenette Goldstein of ALIENS and NEAR DARK fame (street cred). Apparently there's a doctor there too (Robert Patrick, who shared the screen with Goldstein in TERMINATOR 2), and the group of friends will unfortunately find out the hard way that he's MAD! Ghostly figures roam the hallways, half-dead patients shuffle around like zombies, and one-by-one the central group of characters go missing, leaving "Final-Girl" Emily to make some gruesome discoveries as she attempts to locate her friends. 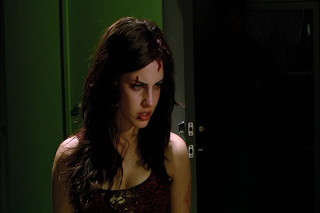 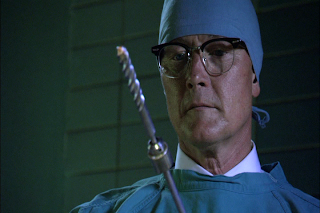 I watched AUTOPSY when it first hit DVD a few years ago, and I remember liking certain things about it but not caring for it as a whole. I don't know what I was thinking, because I REALLY dug it this time around. What stuck with me the most since that initial viewing was the surprising amount of gore and the fact that its lead star, Jessica Lowndes, is one of the most drop-dead gorgeous women I have ever seen in my life. Watching it now, however, I appreciate things about it that I never really paid much attention to before - namely its atmosphere, tone, and pacing. The final act is like SUSPIRIA in a hospital; not as good, mind you, but the nightmarish qualities of AUTOPSY and the vulnerability of its lead character reminded me greatly of Argento's horror masterpiece.

AUTOPSY moves fast. Some of the characters don't last long (partly because they're all fucking stupid), and in general the film doesn't dilly-dally with letting you know exactly what's going on. What's also impressive about AUTOPSY is that it's a slasher film without falling into too many of the slasher traps and conventions; not to mention the hospital setting, which always seems to work well in horror movies. There's also an undeniable backwoods horror vibe to the film, mostly because of the antagonists and how they operate (no pun intended). The fact that director Adam Gierasch was able to throw all of these ingredients into the pot and not have it turn out to be a complete mess is worthy of praise. 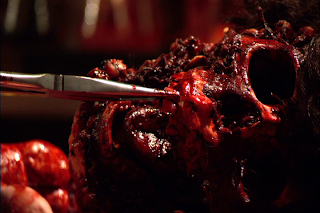 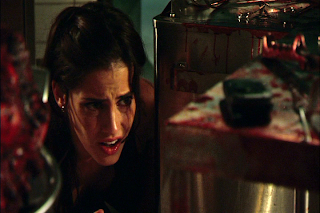 Like Gierasch's NIGHT OF THE DEMONS remake, AUTOPSY will at the very least capture your attention visually because of its extravagant horror imagery. The film does end on a rather anti-climactic note, and it's not a masterpiece by any stretch (I couldn't tell if the repeat shots of Emily running down staircases and entering rooms were there to disorient viewers, or if it was just sloppy filmmaking), but AUTOPSY is a worthwhile splatter movie with a bizarre twist, great gore, and a fever-dream atmosphere that you don't typically get in these sorts of movies. Also noteworthy is Robert Patrick, who at least appears to be taking his role in this seriously and doesn't seem to be phoning it in, which is usually the case with recognizable actors who take on lower-budget horror projects such as this.