Two feuding collectors of medical oddities attempt to negotiate with a group of pint-sized freaks who broke free from their pickle jars.

Dr. Emilio Lorca and Napoleon Lazar are two opposing collectors of nature's mistakes who exist in their own little world of bizarre fascinations. They pay good money for their "medical specimens", and the middleman - or should I say middlewoman - is Belinda Yost, who acquires aborted fetuses from the sewage plant and sells them for obscene amounts of cash to the oblivious collectors. In this case, Belinda gets ahold of a discarded two-faced baby with a rather large head, which she sells to Lazar. However, as the proud new owner of this medical oddity transports his latest acquisition, he's intercepted by a topless woman in a gorilla mask who robs him of the pint-sized freak at gunpoint. Turns out this mystery woman is Sheila, the barely-dressed assistant of Dr. Lorca. 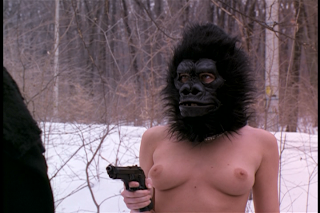 The stolen specimen is added to Lorca's collection of pickled freak fetuses, including a porcupine baby, a musclebound "Hulk baby", and something that resembles a miniature Elephant Man. Together, they make the perfect little family in the demented eyes of Dr. Lorca. The Demented Eyes of Dr. Lorca - it has a nice ring to it and sounds like the name of a cheap 50's B-movie, but I digress. Anyway, Lorca later gets some uninvited guests in the form of Lazar, Belinda, Belinda's dim-witted secretary Elvina, and a wise-cracking private investigator named Alf. Lazar wants his shit, son, but Lorca ain't goin' down without a fight. Getting back what rightfully belongs to him won't be so easy for Lazar, however, when he and everyone in the house realize that the freakish foursome have suddenly become animate and busted loose from their jars. What ensues is pretty obvious, so I'll spare you the details. 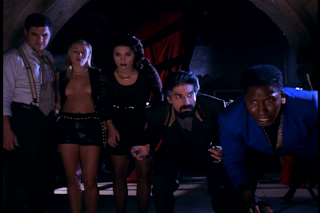 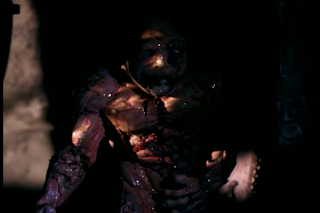 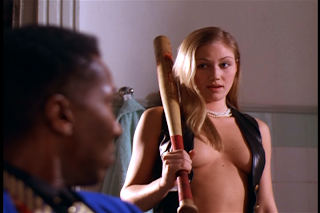 HIDEOUS! was pretty much made in succession with another Charles Band-directed horror-comedy, HEAD OF THE FAMILY. Jacqueline Lovell and Michael Citriniti appear in both films, with Citriniti appearing under heavy makeup and acting under a pseudonym as the titular head of the family in the latter film (strangely, IMDB lists Cintriniti and his pseudonym as separate actors). HIDEOUS! is also a somewhat atypical take on the tiny monster sub-genre. Instead of the mischeivous monsters who are motivated to kill unsuspecting humans by revenge or pleasure, the freaks in this film act violently, initially, because they're backed into a corner and most likely frightened by the humans, specifically Lazar and Lorca, both of whom are quite affectionate towards the monsters and attempt to reason with them like children on numerous occasions. This of course results in the monsters being smothered, figuratively speaking, and feeling threatened, at which point they act accordingly and eventually get satisfaction out of terrorizing the humans.

Anyone looking for a tiny-monster movie in which the primary focus are obviously the tiny monsters themselves may be disappointed with the lack of screen time that the creatures get here; not necessarily because the movie could've used more monster action, but because it puts most of the focus on the annoying human characters who spend most of the running time exchanging stupid insults, like "You poodle dog" not once, but twice. And even when they are on screen, the monsters are obscured by darkness, most likely to conceal the cheap-looking puppets. Jacqueline Lovell is more or less just eye candy here, which is fine with me, but seeing as she was so great in HEAD OF THE FAMILY, it's safe to say that she was under-used in this film. The only characters who stood out were Alf, who's running commentary made him comparable to a confused viewer who was placed in the film and felt the need to question the logic of everything, and the stereotypically dumb blonde Elvina, who's antics I found to be more cute than obnoxious. 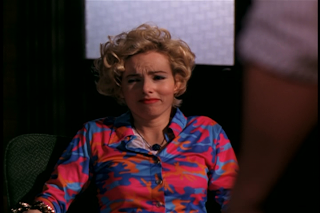 Aside from getting a kick out of the puppets that were used in the film and the gorgeous castle that was used as a set, I didn't particularly like anything about HIDEOUS! It delivers the fun and silliness that you'd expect from a Full Moon horror-comedy, but in general - and keeping in mind I wasn't blinded by the nostalgia factor, nor do I have any sort of personal fondness for the film - it felt like a really average movie to me, and it didn't exceed any expectations I had for it. Perhaps if I had more of a familiarization with Full Moon's back catalog I'd have something to rate it against, but such is not the case. Recommended, but not something anyone should go out of their way for. Check out HEAD OF THE FAMILY instead.