Started Wednesdsay night and ended Thursday night. Anyone who would eventually meet me in Indianapolis heard about how much of a fucking disaster this was. My first flight out of Hawaii was delayed not once but twice, and from there it just got worse and worse. More delayed flights, layovers, and I arrived at my final destination in Toronto, Canada only to find out that my luggage somehow ended up in Washington, which is odd because I didn't even have a connecting flight to Washington. It wouldn't have been such a big deal if EVERYTHING wasn't in my luggage, from all my clothes to my phone charger to my laptop and so on. All I had throughout the weekend was the clothes on my back, basically. Same socks and underwear for the entire weekend and a dead-ass cellphone. Luckily my buddy Mike from the Entrails from the Skeleton Closet podcast gave me some extra clothes (including a Troll 2 shirt that a lot of people at the convention seemed to love and complimented me on) and everyone I met up with was very helpful and giving in regards to me needing anything to hold me over. But just to rewind a little bit, I had quite the scare at Toronto Airport - a situation that involved a lost passport and could have potentially ruined the trip for myself and the Canada friends I had planned on driving down to Indianapolis with (Will from the Gentlemen's Guide to Midnite Cinema and his wife Teresa). When Will picked me up at the airport, I somehow managed to drop my passport somewhere on the curb I was waiting at. We spent around 90 minutes digging through trash cans (after we had already left the airport and I realized my passport was missing) and asking everyone we could find if my passport had turned up anywhere. Nothing. Full on panic mode ensued. Worst case scenario, I would have been stuck in Canada until I got a new passport, which could have been days or weeks. Luckily everything worked out thanks to an airport employee who found my passport and was the last person we talked to before we had given up hope. I'm convinced this man is my guardian angel. Me, Will and Teresa hit the highway by about 6 in the morning and proceeded on a road trip that lasted about 10 hours, give or take. It was about four hours before we hit the Canadian/U.S. border. Once we got out of the city (which was fucking enormous), it was mostly trees and farmlands. This was my first time to Canada and it was a brief but interesting experience. While there, I bought a pack of Canadian cigarettes (which have 25 cigarettes instead of 20 and have giant pictures on the front of them of cancerous mouths and tongues) and a lighter with a Rush logo on it. Once we hit the U.S., we drove through Michigan (what I saw of it was a dump), Ohio (which was absolutely beautiful once we got further out into the country), and of course parts of Indiana. This was my first time in any of those states.

Once we got to Indianapolis, we checked into our hotels and quickly met up with a group of friends, all of whom are people who I had never met in my life and have only communicated with through The Death Rattle, the Gentlemen's Guide to Midnite Cinema, and the various little online communities that tie us together. I won't name everyone, but a lot of blogs and podcasts were represented. The Deadly Doll's House, Chuck Norris Ate My Baby, Silva & Gold, Entrails from the Skeleton Closet, Night of the Living Podcast, Playground of Doom, Podcast without Honor and Humanity, Paracinema Magazine, and so much more. The plan was to hit up a house party being thrown by some local friends, and we did just that later in the night amidst a thunderstorm. Our cab driver said he was nominated for a Fangoria award for his role in HENRY: PORTRAIT OF A SERIAL KILLER 2. I later looked him up and he seemed to be legit. Earlier I had briefly went into the convention at the Marriott just to buy a shirt to wear that night. Regarding the party, lots of alcohol was consumed and it was a great way for me to break the ice with a lot of these people and get to know them. Strangely, there wasn't much ice to be broken; I felt like I had known these people for years and there was rarely an awkward moment during the introductions and various conversations that took place. We partied hard for a few hours (Andrew W.K. would be proud), and the night got rather comedic when a good friend (Ken from the We Like Stuff Too blog) came through the door with a box and went straight to the dining room. Apparently whatever was in the box was for me. Turns out Ken and Will had planned on throwing me a surprise birthday celebration two days before my actual birthday, and in the box was a cake. But not just any cake. This cake... 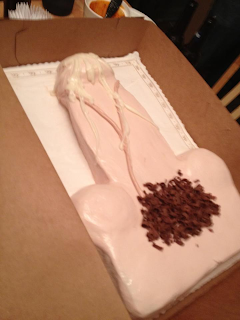 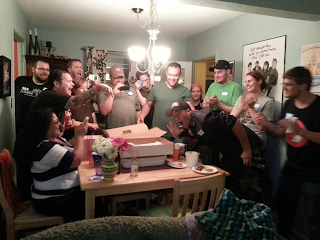 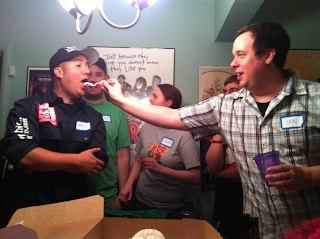 Being fed my cake by Jake McLargeHuge from Podcast Without Honor and Humanity as Dylan and Christine from Paracinema Magazine look on in confusion.

Needless to say there were lots of laughs and pictures being taken. If you're a member of the Gentlemen's Guide Facebook Group, you may have even seen a video of me reacting to the sight of this amazing cake. Shots of Moonshine and J&B were taken, and I was ultimately helped back to my room by Will (and possibly someone else, but I don't remember), where I proceeded to vomit in the toilet and cry to Will about how I wish we all lived closer to each other. Good times. 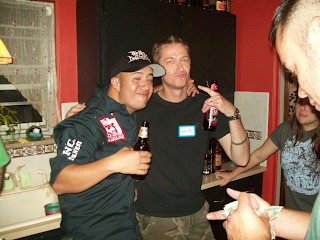 Me and Matt from Chuck Norris Ate My Baby. It was way past my bedtime at this point.

Got invited to breakfast in the morning but turned it down due to still being kinda drunk and in no shape to be amongst society. Slept in for a bit, and made phone calls regarding my lost luggage, which just made me mad. I got different stories from everyone I talked to, including one stating that my luggage "should be" at Indianapolis airport. Had Will drive me to the airport, only to find out that the United Airlines baggage people had no idea what I was talking about. Got mad, went back to the hotel, and made more calls that went absolutely nowhere. This really upset me and it caused me to be in a bad mood for the rest of the night. My trip was ruined by United Airlines and nothing anyone could say would make me feel otherwise. I bought a nice digital camera specifically for the trip so I could take as many photos of friends and freaks as possible, and I couldn't even fucking use it because it was with my luggage in who-knows-where. I distanced myself from the crew for most of the day and eventually made an attempt to socialize later in the night, which consisted of me not saying much and stewing on how much of a nightmare this traveling situation has been. I didn't go into the convention at all on this day, but we did hang out at the Marriott after the festivities and joined a mass drinkathon taking place in the hotel's outdoor courtyard area. Linda Hamilton was just hanging out with a little entourage, drinking, and talking to fans. Earlier in the day she was charging money for photos, but here she was just having a great time and taking plenty of photos with people for free. She was so friendly with her fans, in fact, that she actually made out with a few of them. I kid you not. Teresa even got in on some of the action and has photographic evidence of this intimate encounter. Had I been in a better mood (and had a camera), I would have chatted her up, but I was in too shitty a mood to even care about what was going on. I eventually started to enjoy myself and be social later in the night once I got into some conversations that took my mind off the whole luggage thing. It's hard to be in a bad mood when Emily, Fozzie and the NOTLP crew are around. Day 2 ended at about 5:30 in the morning with some weird chick in my hotel room, but I'll spare you the details. 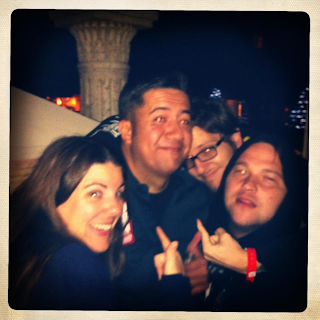 Emily from Deadly Doll's House, Me, and Mike and Matt from Entrails From The Skeleton Closet taking a break from our heated (and drunken) discussion about THE WOMAN and RED, WHITE AND BLUE to pose for the camera.

Met up with the GGTMC guys and a couple of other people for breakfast after getting two hours of sleep. My eyes were so bloodshot that you'd think I'd been hanging out with Cheech and Chong. We hit up the Cracker Barrel (my first time to one) and I finally got that French Toast I've been craving ever since I started going to the gym again and dieting. It was very underwhelming. In fact, it was probably the worst French Toast I've ever had. But I was in great company and bidding farewell (for now) to some dear friends who were hitting the road early, so it didn't matter. Once they all left and I got dropped off at the Marriott, I said goodbye to even more people throughout the day until me and Matt from Chuck Norris Ate My Baby, and Dusty from Playground of Doom were left. Me and Matt walked around the convention for a while (my first time actually going in and exploring the place) as he bought some last minute stuff. This was the longest me and Matt had hung out the entire weekend. We had a few laughs at the expense of some of the people at the convention, and we had great conversations about everything from movies to just life in general. It was nice to just not worry about shit and enjoy my last day in Indianapolis laughing and looking at cool horror memorabilia with someone who I consider to be a good friend. I didn't buy anything, but it was neat to see all these horror stars walking around. Ken Foree and Lance Henriksen in particular seemed like genuinely nice people who enjoyed interacting with the fans. Once Matt left, I decided to head back to the hotel and wind down a little early. It was sort of sad. Dusty sent me a text message from the Marriott but I was pretty spent by that time and wanted to get some dinner and relax in my room for the rest of the night. Overall, it was a good experience. Meeting everyone was great, but the lost luggage situation really bummed me out and took up WAY too much of my time. United Airlines will pay fucking dearly for this. When I got back to the hotel, I received a phone call from a number I didn't recognize. My luggage finally arrived in Indianapolis. Fuck off.