Michele Soavi is one of those Italian filmmakers who should be much more recognized and successful than he is - at least to us North Americans anyway. Ironically, it's because of his own doing that he never became one of the great Italian horror directors who could have easily been on par with the maestros who showed him the ropes, like Fulci and Argento. Soavi was a director who wanted to do something different with each movie, which is what he apparently did. I haven't seen all of his movies, but I know enough about him to tell you that he had a short run of horror movies and eventually moved on to other things, whereas his mentors found their niche in horror and became complacent with churning out similar genre movies that further cemented them as masters of the macabre. It's also a possibility that Soavi isn't in the same conversation as guys like Fulci, Argento, and Bava because he's younger and started a little too late in the game and never got a chance to establish himself before the Italian film industry took a backseat to television. Either way, while Soavi doesn't have as extensive a filmography as the masters who came before him, he proved that he was able to adapt to new genres of horror and make outstanding, stylish examples of whatever genre he tackled..

THE CHURCH was the product of a collaboration between Soavi and what I refer to as "The Argento Mafia", and it's also considered to be the third DEMONS movie. I could do an entire article just on the people who were involved with the making of this movie alone, but to save you and everyone else time I'd just recommend checking out the film's IMDB page if you're interested.

THE CHURCH is a supernatural horror movie that mostly takes place in - you guessed it - a church. A jerk named Evan takes a job at a Catholic church as the official librarian. He was brought in to specifically catalog and organize an intimidating number of books, but things take a turn when, under the nose of the Bishop, Evan and a woman who's helping with the restoration of the church discover what appears to be an ancient scribe and attempt to translate it. Once Evan removes the aforementioned scribe from the church, shit gets downright weird for everyone involved. Mind you, this is a church with a dark and tragic history; in the opening minutes of the film, it's revealed that villagers in the medieval ages were slaughtered by templars and religious crusaders who accused them of being witches. The bodies of the villagers were dumped into a mass grave and the very church that the film takes place in was built over them. So yeah, when "shit gets real" and all Hell literally breaks loose, it doesn't come as a huge surprise, especially when the seal to the crypt that houses the ancient corpses is later broken. 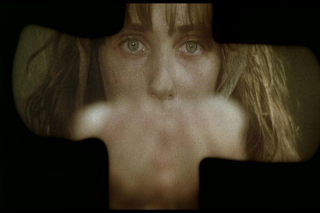 THE CHURCH, in my opinion, is a little weak in the storytelling department and is one of those style-over-substance, "nightmare logic" horror movies that Italians were (and still are) known for, similar to the other DEMONS movies that preceded it. There are a lot of unnecessary scenes that screw up the pacing and keep the plot from developing. Yes, despite me throwing the nightmare logic excuse out there, there's still a plot, but it gets lost at times and takes a backseat to the visuals, the gore, and the atmosphere. And what amazing visuals they are. This is one of those horror movies where it's easy to overlook the troubled storytelling for the simple fact that the visuals and the atmosphere are so impressive. 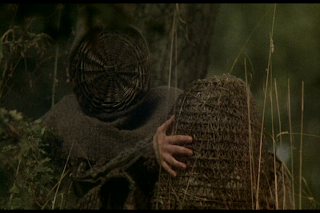 Sergio Stivaletti and the other special effects and makeup artists who were involved in this film really brought the thunder. On display in THE CHURCH are easily, without question, some of the most impressive horror visuals I've ever seen in Italian cinema. Not so much the gore effects, but the set design, the props, and especially some of the creatures and Hellish beings that were brought to life during the film's more nightmarish sequences. On top of that, the general cinematography and look of the film is quite excellent, as is the score by Keith Emerson and Phillip Glass, as well as musical contributions by Goblin. There are certain pieces of music that are undeniably Goblin and others that sound more like something Emerson and Glass would do. In particular, there's an outstanding organ-heavy number that pops up throughout that sounds beautiful and unbelievably sinister at the same time. 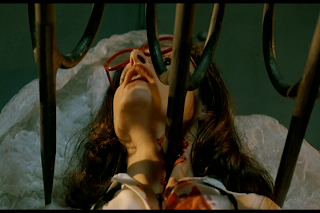 Interestingly, THE CHURCH takes a turn towards the end and becomes very similar to Lamberto Bava's DEMONS for obvious reasons, in that you have all of these characters trapped in the church as a series of demonic possessions and an unstoppable evil force slowly takes over. The floodgates are essentially opened, and a bunch of horrifying shit ensues as people are, for the most part, helpless and unable to do anything about it. It's during this section of the film that the viewer must compromise: accept it for what it is and enjoy what THE CHURCH transforms into or lament over the fact that the film becomes a mess, drops characters and focuses on new ones way too late in the game, and is perhaps too nightmarish and inherently convoluted for its own good. 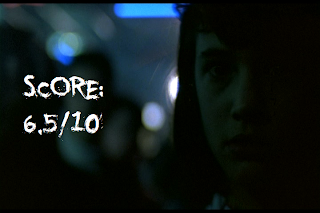 As I said, there's some sloppy storytelling here as well as some continuity issues. Again, I can overlook a lot of it because of the strength of the film's style, but there are some moments in the film that I had problems with. For example, there's a certain character who gets brutally killed in the church in front of many witnesses, but then the film immediately cuts to some kid sitting in one of the church pews and playing the trumpet while everyone else looking completely indifferent to what just happened. It's as if the horrible death that just took place never happened. Really? I can buy certain WTF moments in this movie, but that's not one of them. THE CHURCH sort of lost me at that point but kept me interested enough with the crazy visuals. THE CHURCH is a movie with many highs and lows but not a lot of middle ground. It's either really outstanding at times or really poor, but I'd still recommend it to anyone who likes Italian horror, great practical effects in horror movies, or just nutty supernatural horror in general.

Next up is DELLAMORTE DELLAMORE a.k.a. CEMETERY MAN, which is a personal favorite and is based on the same comic that inspired DYLAN DOG: DEAD OF NIGHT. British actor Rupert Everett plays Francesco Dellamorte (Francis of Death) - a cemetery watchman who lives in a small house at a graveyard with his dim-witted assisted Gnaghi, played by French actor François Hadji-Lazaro. Francesco oversees pretty much everything that goes on in the cemetery, be it burials or the selling of plots. For some unknown reason, corpses rise from their graves approximately a week after they're buried, at which point Francesco is patiently waiting for them with gun in hand and ready to blow their brains out. The "Returners", as they're referred to in the film, have become so common that Francesco accepts it as part of the job and nonchalantly kills them on a nightly basis before putting them back in their final resting places. 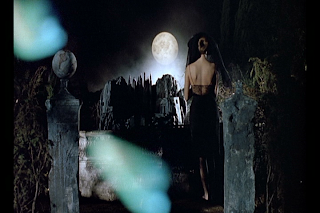 Francesco Dellamorte's monotonous existence becomes considerably more interesting when he meets a young widow at a burial. The widow, played by Anna Falchi (one of the most stunning women I've ever seen in a horror movie), is mourning the death of her much older husband, but Francesco seizes the opportunity to put the moves on her anyway. You get the sense, though, that he's being aggressive not to be a creep and take advantage of someone who's vulnerable, but because he's so infatuated by her that he'd rather make a move at such an inappropriate time rather than lose her forever. That and he's lonely. Luckily for him, it works, and he discovers that this nameless and mysterious widow has a bizarre fascination with death, which leads to one of the more memorable sex scenes in the history of horror cinema. 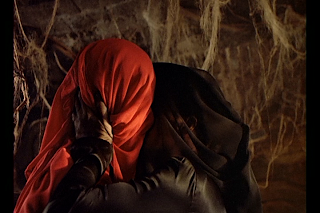 One of the many recurring themes in CEMETERY MAN is that, in Francesco's case, when something seems too good to be true, it is. That being said, the widow's dead husband crawls out of his grave and kills her as they're having sex, leaving Francesco alone and without love once again. Throughout the film, Francesco meets two more women who are dead ringers (no pun intended) for the widow that he lost just as quickly as he gained. Like the widow, however, these two women are taken away from Francesco because of certain circumstances. Meanwhile, Gnaghi forms a brief relationship with the severed head of a female corpse who sings to him and "Returners" continue to show up, including one that bursts out of its grave on a motorcycle! It makes absolutely no sense, but it's cool to watch. 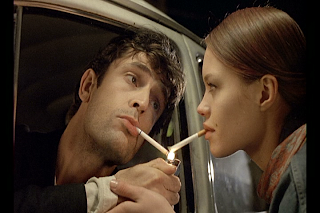 The main reason I love CEMETERY MAN as much as I do is because of how it plays with the theme of love and death and how the two tie together. Throughout the film is a seemingly endless cycle of love and death. Francesco exists in a world of death, he finds love, death follows, repeat. Same for Gnaghi to a certain extent. The bottom line is that the characters in this movie can't have love without death somehow intervening. So much to chew on here (again, no pun intended) if you are able to invest in this film, but chances are if you go into this expecting a simple zombie movie, you'll be too disappointed to truly get what the film is trying to say. I'll be the first to admit that this is not a movie for everyone. For the sake of categorizing and lumping CEMETERY MAN into a genre, it's easy to call it a "zombie movie", but it's so much more than that. I see this as a film about doomed relationships with a zombie backdrop. 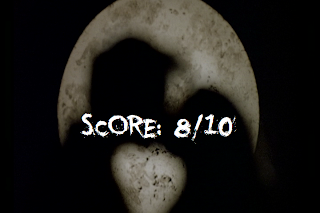 One could either see the shitty state of Francesco's love life as being symbolic of someone who refuses to let old wounds close and, against their better judgment, allows certain people back into their life, or one could look at everything more at face value and see it as Death itself (as in the Grim Reaper) going out of its way to keep Francesco trapped at the cemetery, as if he were stuck in some sort of limbo in which his sole purpose of existence was to maintain the graveyard and keep those pesky Returners from escaping Death's grasp. Or, you could even consider both of those theories. In any event, my case for the latter theory is backed by the film's bizarre ending that I won't spoil. All of that pretentious talk aside, CEMETERY MAN has an atmosphere that I don't get from many horror movies, if any at all aside from some of Peter Jackson's earlier works. It has some of the best visuals I have ever seen in a horror movie period, and the film successfully teeters between Fantasy and Horror while injecting erotica and dark comedy to great effect. It's not perfect by any means, but CEMETERY MAN is quite simply one of the most beautiful horror movies I have ever seen.