What a strange movie. What a strange movie for Clint Eastwood to pick as his swan song as far as his acting career is concerned, and what a strange movie in general. Eastwood essentially plays a caricature of the stereotypical stubborn and grumpy old man who still carries a grudge with him against people of other ethnicities because of his experiences in "the war" (in his case, the Korean War) and because of the era in which he was raised. His wife has passed away, and among the very few things left in the world that he cares about are his dog and his vintage Gran Torino. He has the voice of a man who eats razors for breakfast and washes them down with kerosine, and, since the passing of his wife, he's pretty much distanced himself from the rest of his family, primarily because his sons want to put him in a retirement home. To pass the time, he drinks PBR on his porch (Frank Booth would approve) and mumbles obscenities to himself directed at the Asian community that takes up most of his neighborhood. That pretty much sums up Eastwood's character, Walt Kowalski (pro-wrestling fans should understand the significance of that name). 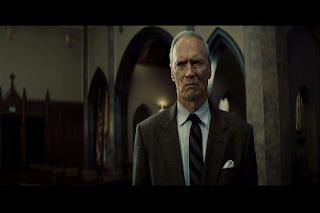 GRAN TORINO opens at the funeral of Walt's wife, and from there we're introduced to his family as well, including his disrespectful grand-children and his two sons and their wives. It's apparent that Walt is extremely annoyed with his children and grand-kids, and the same can also be said for everyone else he comes in contact with, including a somewhat pushy and overbearing priest who insists on watching over Walt now that his wife is dead; despite this being a request of his late wife before she died, Walt sees it as an insult because he's old and thinks the priest, Father Janovich, feels he needs to babysit him. Not long after that, we're introduced to Walt's neighbors - an Asian family who will play a very important part in the rest of the film. 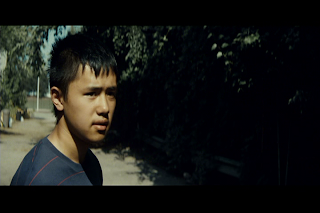 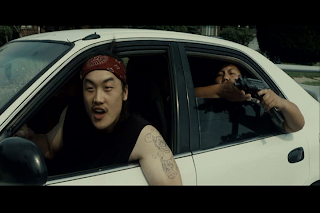 What's great about Walt is that he's unapologetically racist. He calls his neighbors "Gooks" and "zipperheads" to their faces, and he doesn't feel the least bit bad about it. At the same time, if you look at it from the perspective of his neighbors, it could be hard to take Walt seriously considering how old he is. It's one of those things where old people can get away with certain things that younger people can't, and this entirely has to do with them being old and quite possibly senile. Long story short, Walt intervenes on two different occasions when a pair of Asian siblings who live next door to him find themselves in trouble, be it with a local gang or a group of troublemakers hanging out on a street corner. He eventually befriends the both of them and takes them under his aching wing, but things take a turn when the aforementioned street gang continue harassing the siblings and take it a little too far. 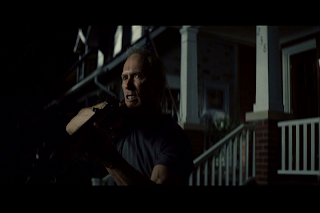 Getting back to what I said earlier about the movie being strange, one of the reasons I say that is because of how ridiculous Clint Eastwood's character is. The thing is, though, it actually kinda works. Despite Walt Kowalski being a caricature and a stereotype to the utmost, Eastwood gives the character a lot of depth, and probably more so than the character has any right to have. While it could be argued that Eastwood's character is badly-written (he actually says "Get off my lawn" more than once and, at times, the line is blurred between intentional and unintentional comedy), but you can still sympathize with him despite his rotten attitude. There are also little touches to the character development of Walt that humanize him and make him more than just the quintessential crotchety old man of cinema.

GRAN TORINO is also strange in the context of it being Eastwood's last film as an actor, but that's also what I admire about it. You see, Eastwood surely has more than enough clout to assemble big-name casts and pretty much have carte blanche as a director at this stage in his career. But instead of doing a crime film or a Western and reliving his glory days (a masturbatory vanity project if you will), he decided to play a grumpy old geezer and surround himself with a bunch of actors who are basically unknowns in comparison to the A-lister that Eastwood is. Not only that, but he's playing a senior citizen who's finally coming to terms with his age and accepting the fact that death may be nearer than he'd like to admit. Judging by some of his behavior in the film, it's also possible that he suffers from dementia, but I doubt it was intended to be the case. Anyway, it's a very interesting and somewhat "meta" role for Eastwood. 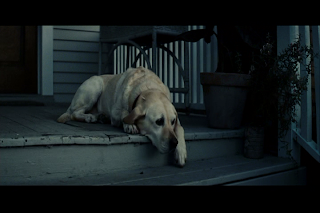 There's a lot to talk about when it comes to this film, especially as it pertains to the character of Walt in general and his relationship with the Asian kids, but I'd probably be telling everyone what they already know since GRAN TORINO has been seen by many people by this point. I do have some issues with the film, though, and don't think it's a masterpiece by any means. While it's far from the quintessential Clint movie, I still think it's a very good film at the end of the day despite some of the issues I have with it. Particularly impressive is the pacing, as there's never that period of down-time where the movie seemingly comes to a screeching halt that you see in so many films; there's always something going on, and the story progresses rather nicely. If I were to pick a highlight, it would definitely be the character of Walt, because of how he's portrayed by Eastwood and because of his amusing and ultimately sad character arc. Also, I'm pretty sure no one in the world says "Fuck" better than Eastwood in this movie.

Roger Ward's thoughts:
‘Gran Torino’, (2008) starring and directed by Clint Eastwood, is a great effort by Clint, who has managed to keep his star on the horizon for all of the years that he has. Clint, like an old wine, is something to be cherished, as starting out, as he did, in bit parts and eventually taking on the role of Rowdy Yates, a cowboy in the television series Rawhide during the 60’s. He was pretty much disregarded as a future talent, and probably would have remained undiscovered as it were, had it not been for his stints with Sergio Leone in the Spaghetti Westerns that he did during the hiatus from Rawhide. Indeed I remember seeing him in a group, at one of the studios, listening in great admiration as Marlon Brando paid a visit to one of the studios to grace the ‘lesser beings’ with his presence. Little did any of us know, except perhaps Clint himself, that he would far surpass Brando in work ethic, talent and longevity. Although I did get knowledge, first hand, of Clint’s determination and will to succeed when in 1978, (40 years prior to his filming of Gran Torino) I paid a visit to Hollywood with a fairly hot property that every star on the block was prepared to discuss… except Eastwood, who refused point blank to even read it and would not enter into discussions.
Continue the great work Clint, every actor starting out should take note of your early struggle and realize that perseverance (and of course talent) is the name of the game.
By the way Clint, disregarding your teenage angst and rebellion in '78, this old Pro with a work ethic and productively similar to your own, would love to be in one of your future films. I’ve got a couple of nice ones already written should you choose to finally read!!!