I remember seeing the trailer for this back in, like, 2007; despite my growing dislike for zombie movies, this has been on my radar ever since, but the divisive reviews made it less of a priority over time. And, it should be said that I've seen most of the films that comprise what little there is of a "Nazi Zombie" sub-genre since then, so I was interested to see how this would stack up. 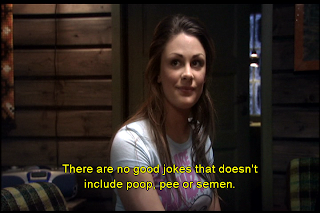 Set during winter, DEAD SNOW revolves around a group of friends who head up to the mountains and stay in a cabin that, unbeknownst to them, is placed directly on top of cursed grounds. On their first night, some crazy old guy stops by to drop some info. Apparently, the area in which they're camping was a vital piece of land for the Nazis during World War II. In fear of the Russians, the Germans raped and pillaged the area and terrorized the locals. The citizens at the time defended themselves and plotted an attack against the Nazis. Not only was the attack successful, but they also went a little overboard in some cases. The surviving Nazis fled into the mountains and disappeared. The old guy also alludes to some ghostly activity up in them there hills before disappearing into the night. 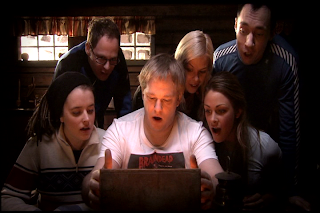 The friends then discover a box of gold under the floorboards of the cabin, and shit pretty much gets out of control from there. Turns out the Nazis (now zombies, but breathing heavily nonetheless) are protecting the gold, so it goes without saying that the group of friends become a target as the Nazis gradually lay siege to the camp grounds throughout the film, leading to an ultimate showdown that plays out like EVIL DEAD meets BRAVEHEART... but with Nazi zombies and stuff. 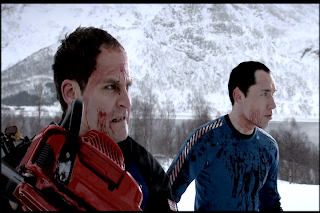 When it was said and done, I could see why this film is as divisive as it is. I for one groaned to myself as one of the characters name-dropped EVIL DEAD and spewed a lot of forced dialogue about horror movies, which is most likely director Tommy Wirkola speaking through said character and showing that he's a fan of the genre. When it comes to modern-day B-movies and low-budget productions - independent or otherwise - nothing annoys me more about these films than when they make obvious references to other movies. It doesn't give the filmmaker any credibility in my mind. Instead, it reeks of unoriginality and has the opposite of the intended effect. That's pretty much where my complaints with this film end, though. I went into it expecting a good time, and that's most definitely what I got. 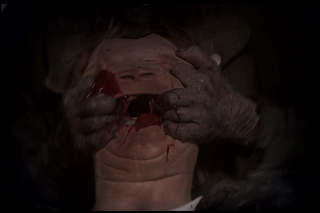 Actually, I lied. I do have another complaint. My bad! One of my favorite cinematic settings is the snow, but sometimes filmmakers can drop the ball and not exploit the setting as much as they should. Such is the case for a majority of DEAD SNOW, but there are some decent pay-offs involving the snowy setting towards the end. The main example of how Tommy Wirkola failed to exploit the setting would be most of the second half of the film as a whole. A lot of it takes place during the day, which makes it inherently less cinematic and takes away from what could've been some awesome atmosphere. 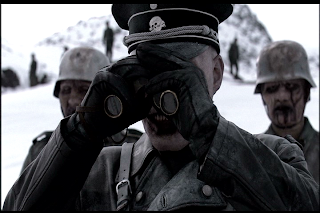 DEAD SNOW is full of predictable, cliche moments, but I guess that comes with the territory when you have a movie directed by a horror fan who wants to pay homage to other movies. It also became evident early on that Wirkola was going for a more comedic and gore-driven approach as opposed to going for scares, style, and creating memorable visuals. A lot of the flourishes that we do get are indeed in the spirit of Sam Raimi, which ties into the EVIL DEAD influence. As far as its comedic elements, DEAD SNOW isn't laugh-out-loud funny, but I did find it to be somewhat humorous at times, and the big clash at the end also brought to mind SHAUN OF THE DEAD. Gripes aside, though, this ended up being a lot of fun and much gorier than I expected. Maybe Wirkola acknowledged early on that he's not quite capable of making a classic at this point in his career, so he compensated for that by making something fun and utilizing as much blood as he could acquire. If that's the case, it worked. DEAD SNOW may not be the best example of the obscure Zombie sub-genre, but I do think that, for what it's worth and based on what it brings to the table, it's the quintessential Nazi Zombie movie at this point in time.