I haven't seen the original SCREAMERS with Peter Weller and Jennifer Rubin yet. I'm sure the three of us will meet up some day to watch it. I haven't seen the original SCREAMERS by myself for that matter. Had this been called SCREAMERS 2, I would've held off on watching it for obvious reasons, but the fact that it has a sub-title makes it OK because I can think of it as a standalone film. However, if this was in fact a direct sequel to the original (which came out, like, twenty years ago), I have a strong suspicion that there might be a drastic difference in terms of quality. But, if you're like me and haven't seen the original and you find yourself desperately wanting to check out SCREAMERS: THE HUNTING by the time you finish reading this review, at least this film gives you a quick info-dump at the beginning that either: A) puts some closure on the first movie by revealing the fate of its characters, B) acts as a cheap way of tying this to the original, or C) all of the above. Supposedly the lead character in this is the daughter of Peter Weller's character in the original, but I didn't pick up on that initially. 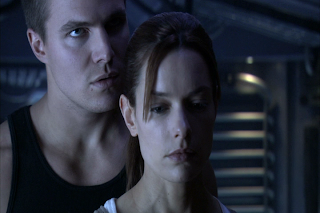 This is another movie I watched months ago when I went through a Sci-Fi/Cyberpunk phase, so I figured I'd finally get around to reviewing the damn thing already. Under normal circumstances, I probably wouldn't have watched this. Anyway, SCREAMERS: THE HUNTING opens in a way that brought to mind THE HILLS HAVE EYES, except with killer mechanical orbs as opposed to mutant rednecks. A group of nomads are eliminated by the titular "Screamers" (the mechanical orbs) on a desert planet that's visually similar to Mars. Turns out the planet is called Sirius 6B, and by the time our lead characters (a rescue team) get there, it's believed that all of the planet's residents have been killed by the Screamers. 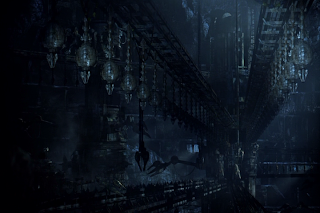 It's revealed that the Screamers were military weapons that essentially went haywire and killed everyone in sight instead of just their intended targets. Again, if this was something that was established in the original SCREAMERS, I'm not sure; I'm guessing it's the case, but the timing of this sequel is interesting, in that one could easily draw parallels between the fictional Screamers and the real-life military drones in the Middle East. But anyway, the rescue team receives a distress signal from Sirius 6B that suggests there's life on the planet after all, which is why they travel to the barren planet in the first place. 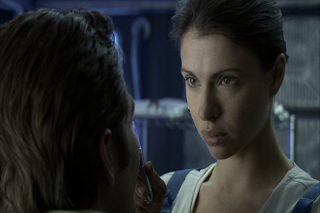 While this isn't a Cyberpunk movie per se, it does fit the criteria in some ways. For example, the Screamers have transcended their capabilities as machines and, since their creation, have actually evolved the same way that living creatures do. In other words, they shouldn't be operational but they are. This sort of dominant technology, in a way, fits the Cyberpunk idea. Aesthetically, though, it's more HILLS HAVE EYES than BLADE RUNNER, obviously. 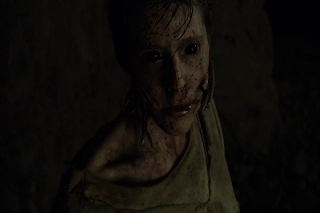 As far as the members of the rescue team, there aren't any annoying douchebags in the group, which was a relief to see. The group is inherently similar to the teams from ALIEN and ALIENS, which can be said about most movies that present horror in an outer space setting - or any horror movie involving a rescue team for that matter (LEVIATHAN, etc.). Speaking of which, SCREAMERS: THE HUNTING is similar to so many other movies; aside from most of the films I've already mentioned in this review, you can throw PLANET OF THE VAMPIRES and PROMETHEUS in there, but it goes without saying that this movie is presented on a much smaller scale and not quite as entertaining. 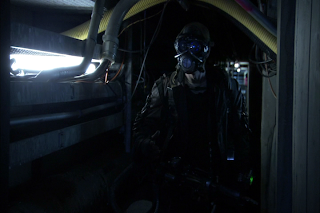 Shit gets pretty gory once some Screamer/human hybrids are introduced and mayhem ensues. I won't reveal too much about Lance Henriksen's role in this, but let's just say that this is without a doubt one of his easiest paydays ever. Despite Henriksen's minimal screen time, his character is interesting, and, by the time he appears, he's a much welcomed addition to the film. For the most part, SCREAMERS: THE HUNTING is a pretty average movie all across the board, with the exception being the impressive amount of gore and the surprisingly brisk pacing. The film as a whole looks low budget. The lighting is poor and there isn't much atmosphere to speak of, but the special effects are actually decent. Again, I haven't seen the original, so I can't say whether or not I'd recommend this as a sequel, but then again I can't really recommend it based on its own merits anyway.