Legendary tough-guy actor Charles Bronson really did reach new lows in his career when it came to his work with Golan Globus and Cannon Films, and 10 TO MIDNIGHT is evidence of this. Thankfully, fans of sleazy cinema have gained a lot from the questionable decisions of Mr. Bronson, as some of the output in the back end of his career proved to be entertaining. One needs to look no further than DEATH WISH 3 in terms of absolutely insane Charles Bronson movies, but 10 TO MIDNIGHT is a classic in its own right - depending on who you ask, of course. 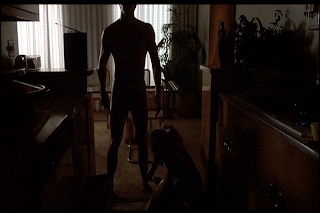 In 10 TO MIDNIGHT, detective Leo Kessler (Bronson) plays a LAPD detective who, along with his new partner McAnn, attempts to apprehend a psychotic pervert who kills women. One of the interesting things about this film is that it's not a mystery by any means; the killer's identity is revealed before it's even established that there's a murderer on the loose. Warren Stacey (the killer) is young, fairly good-looking, and probably wouldn't have a problem picking up women the easy way if he worked on his social skills. Instead, he stalks women and slashes them. He's not a serial killer, though - not in the traditional sense anyway. It's established through flashbacks that he killed one woman in particular, and, in his own mind, he had a reason for doing so. From there, it seemingly sparked something that compelled him to commit more murders. Regardless of his motives, the character is undeniably a hater of women. 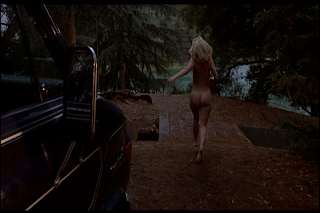 I wouldn't go so far as to call 10 TO MIDNIGHT a great film, even in the context of Bronson's filmography, but it's certainly one of the more entertaining Bronson flicks I've ever seen. The structure of the film in particular is interesting, in that it's a hybrid of a slasher movie and a crime/police procedural film, with somewhat of a European (specifically Giallo) vibe in terms of the mood and style. Also, 80s as fuck. 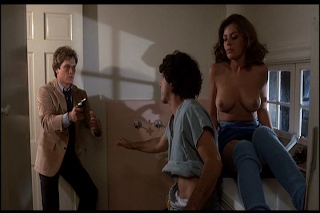 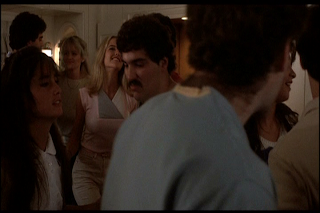 As far as the film's slasher elements, it's an interesting coincidence that Kessler's daughter in this is named Laurie, considering she's obviously set up as the Final Girl, or at least as close to a traditional Final Girl as you can get. And of course it goes without saying that "Laurie" is the name of the quintessential slasher movie heroine. This is also the only slasher movie I've seen with a killer who goes out of his way to get naked before committing each murder. Speaking of uncomfortable moments, it's slightly awkward (but hilarious) hearing Charles Bronson say "His knife has gotta be his penis" in a serious context. But that's nothing compared to Bronson whipping out a primitive-looking sex toy during an interrogation scene and declaring: "It's for jacking off!" 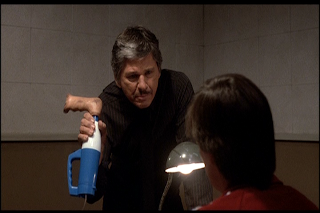 Again, 10 TO MIDNIGHT isn't necessarily a "great" film. It's entertaining and sleazy, but it does a few things that are worthy of note. One of the areas where it's successful is that it throws a lot at you without turning into an absolute clusterfuck. Aside from what I already mentioned about it being a genre mash-up of sorts, some of the character relationships in this become a focal point at times, which I wasn't expecting. There's the tension between right-wing Kessler and his more conservative partner, as well as a blooming relationship between McAnn and Laurie that doesn't feel contrived. On top of that, Kessler makes some poor professional decisions that later bite him in the ass, and the film even briefly turns into a courtroom drama. And of course there's the internal conflict of the killer losing his battle with psychosis. As far as the "blemishes" on Bronson's filmography, you could do a hell of a lot worse than 10 TO MIDNIGHT.