I first heard about this movie during one of Zack Carlson's interviews for the Gentlemen's Guide to Midnite Cinema, where he promoted his book DESTROY ALL MOVIES!!!: THE COMPLETE GUIDE TO PUNKS ON FILM (great book by the way) and talked about some of the more ridiculous movies he watched as he compiled reviews for it. One of the movies he brought up was GROTESQUE, and what stood out in his description was its bizarre ending - that and the obscurity of it really piqued my interest and immediately made this a must-see film. Besides, anyone familiar with Zack Carlson knows he has a talent for making pretty much any movie sound like something you need to see. Since then, the fine folks over at Shout! Factory released GROTESQUE on DVD for the first time as part of a four-pack. Considering they released a shitty full-screen version of it, it's safe to say they couldn't get their hands on the original print, which is a shame. C'est la vie. Any GROTESQUE is better than no GROTESQUE at all... or is it??!! 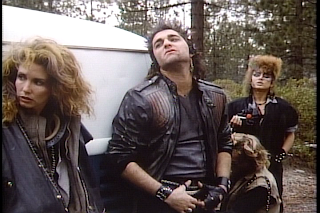 Friends Lisa and Kathy head up to the mountains to visit Lisa's father - a Hollywood makeup and special effects artists named Orville, who specializes in monster movies. From there, shit gets out of control as a group of punks invade Orville's home and terrorize everyone, leaving bodies battered, bruised, and, in some cases, dead. GROTESQUE then turns into one of the most bizarre revenge movies I've ever seen when two characters come into the picture - one of them being Orville's brother and the other being a hideously-deformed hunchback who somehow has ties to the family. 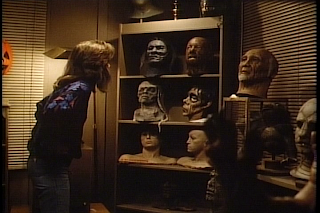 First of all, I found it interesting that Lisa's father is a makeup artist who works on horror films. It's not often you see someone in a movie with that sort of profession, and, when you do, shit has a tendency to get self-referential. Such is the case with GROTESQUE, but its meta elements range from vague to completely breaking down the fourth wall altogether. It's quite odd. In fact, pretty much everything about this movie is odd. Ironically, the only thing cut-and-dry about this film is the collection of punks, who are easily one of the craziest groups of "punkers" I've ever seen in a film. Seriously, the punks in this movie are a spectacle and seem like they'd be right at home in an 80s Troma movie. Even crazier is that actor Robert Z'Dar (MANIAC COP) plays one of the more docile punks. 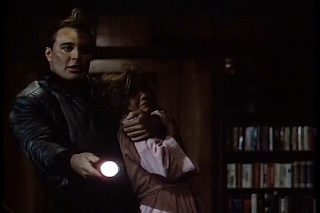 When I sat down to watch GROTESQUE with the intention of reviewing it, one of the last films I expected to see similarities to was Alexander Aja's HIGH TENSION, but it ended up being the case, specifically when it came to the relationship between Lisa and Kathy. They reminded me of the two female leads in the French slasher, in that the lesbian overtones were strong. Whereas it was mostly one-sided in HIGH TENSION, it seemed to be mutual here. Plus, you have the fact that these two girls (Lisa and Kathy) are on a road trip together, only to settle down in a family member's home for the night and be brutalized when they least expect it. 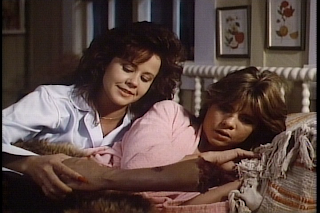 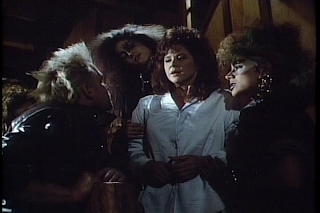 Surprisingly, there's some decent horror atmosphere during the home invasion part of the film - thunder, lightning, fog, dead old trees, minimal lighting. And the fact that the home is littered with props and masks from monster movies only adds to the visual element for obvious reasons. Two of the three masks from HALLOWEEN III: SEASON OF THE WITCH even make an appearance, which was a neat Easter egg.

Basically, what's initally set up as a home invasion film gets downright bizarre at a certain point, and then it just gets weirder and weirder as it goes along and builds to an ending that goes off the fucking rails in a way that no one will see coming (unless you're like me and already knew about it beforehand). That all might sound like praise, but the strangeness and seemingly incomplete nature of GROTESQUE will no doubt be a turn-off to most people. I'd heard mostly bad things about this movie going into it; after watching it, I can understand the negative reactions, but, for me, it worked in so many ways, and it's so unusual (and arguably a trainwreck) that I couldn't help but be enthralled by what I was watching. At the very least, had GROTESQUE completely shit the bed by the time it was all said and done, the punks alone would've made it worthwhile. While the back end is somewhat of a letdown, I quite enjoyed GROTESQUE and appreciate it as an interesting mess.