I reviewed 10 TO MIDNIGHT a week or so ago, which was part of a MGM double-feature DVD release with this movie. It's very fitting that these two movies got packaged together since they both share common traits - the obvious being that they both star Charles Bronson. Duh. Both films were also produced by Golan-Globus, directed by J. Lee Thompson, and are sleazy as fuck. Oh, and both feature Bronson waving a sex toy at a bad guy. In this case, it's suggested that Bronson's gonna violate a sex offender with a dry dildo. As I said in my 10 TO MIDNIGHT review, I'm sure that's not a movie that Charles Bronson wants to be remembered for. The same can definitely be said about KINJITE: FORBIDDEN SUBJECTS. 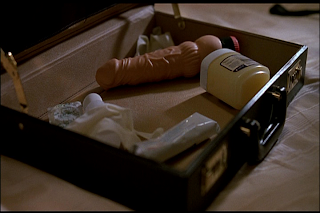 When the opening shots of a film are of cocaine and a briefcase containing vaseline and a dildo, you know you're in for a swell time. In 10 TO MIDNIGHT, Bronson played a hands-on, right-wing cop whose ideals clashed with that of his conservative partner. In KINJITE, Bronson plays a hands-on, right-wing cop with a short fuse. Also, politically incorrect and possibly racist. This time around, he's a vice detective who targets a Latino named Duke, who pimps out underage girls. Considering Bronson's daughter in this is an underage girl, there's a lingering threat to her innocence throughout the movie. There's also a plot thread involving a perverted and sexually repressed Japanese business man who eventually crosses paths with Bronson's character in an ironic way. 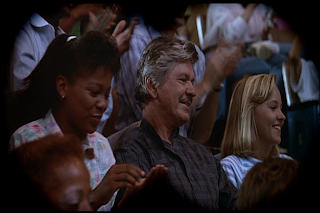 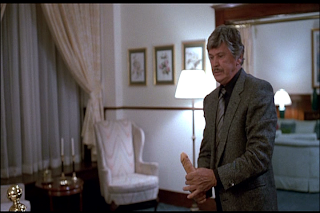 While 10 TO MIDNIGHT is sleazier in terms of actual content (a naked serial killer), KINJITE takes first place in the sleaze contest in terms of what's suggested. Duke and his employees for example. You can line up ten butt-ass naked serial killers in a row, all of them holding the severed heads of their female victims, and it still doesn't get any scummier than the bad guys in this. They prey on children, get them high, run trains on them, and loan them out to clientele for whatever sexual desires they need fulfilled. To quote any given veteran professional wrestler: "That's heat, brother." While enjoyable for the sleaze factor and appealing for the novelty of Charles Bronson clearly not giving a fuck about his legacy, KINJITE is, overall, a fairly disposable Bronson flick. It's not bad by any means, but it doesn't go in any directions I'd consider surprising, shocking, or clever. The entertainment factor is there, the pacing is pretty good, and there's an appropriate amount of action and people getting their asses kicked considering this is a Cannon joint, so there's that. There's also a neat Danny Trejo cameo towards the end, and, even though she's playing jailbait in this, Nicole Eggert is lookin' damn fine as one of Duke's main girls. Actually, she would've only been 16 or 17 years-old when this was filmed. But she's technically nine years older than me in real life, so I'm allowed find her attractive in this.... right? Don't judge me. Anyway... not a stand-out in Bronson's filmography (not for the right reasons anyway) but certainly worth a watch if you're into ridiculous 80s output of Cannon Films... or if you just like seeing Bronson beat the shit out of people.